Thousands of National Guard troops were told to leave U.S. Capitol grounds Thursday and are currently staying outside and in parking garages, according to a Thursday evening report from Politico.

Around 25,000 Guard troops had been deployed in and around the Capitol as security for President Joe Biden’s Jan. 20 inauguration following the Jan. 6 riot that saw hundreds of protesters storm the Capitol.

After weeks of staying on congressional grounds, all National Guard troops were ordered to vacate both the U.S. Capitol and other congressional buildings, Politico reported. 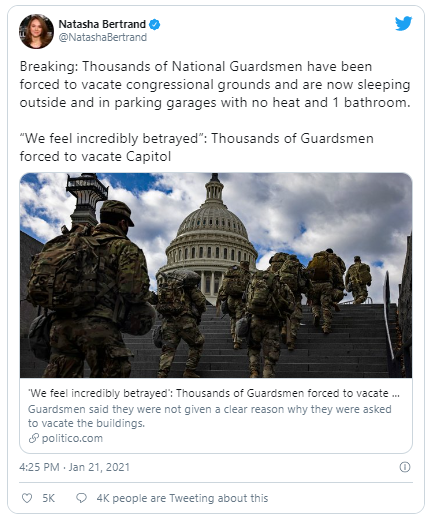 Guardsmen who were resting in Dirksen Senate Office Building were abruptly told to leave the building Thursday, one Guardsman told Politico. They moved to a nearby parking garage that lacked internet reception and had only one bathroom with two stalls for around 5,000 troops, the report continued.

“Yesterday dozens of senators and congressmen walked down our lines taking photos, shaking our hands and thanking us for our service,” the Guardsman told Politico. “Within 24 hours, they had no further use for us and banished us to the corner of a parking garage. We feel incredibly betrayed.” 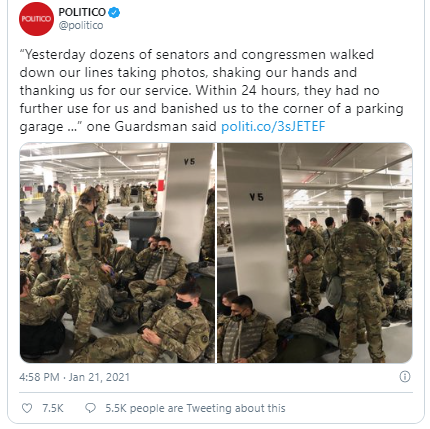 Another Guardsman told the outlet that mobile command centers have been set up either outside or in hotels nearby, and troops were told to take rest breaks outside and in parking garages.

No clear reason was given for the troops’ banishment. The first Guardsman told Politico that it could have had something to do with a complaint about some troops not wearing masks, although he insisted masks are worn unless soldiers are “eating and drinking.”

A pair of soldiers told The New York Times that troops have been breathing in exhaust fumes because the Thurgood Marshall Center garage is still being used for parking.

“As Congress is in session and increased foot traffic and business is being conducted, Capitol Police asked the troops to move their rest area,” Guard spokesperson Maj. Matt Murphy told Politico. “They were temporarily relocated to the Thurgood Marshall Judicial Center garage with heat and restroom facilities. We remain an agile and flexible force to provide for the safety and security of the Capitol and its surrounding areas.” (RELATED: REPORT: National Guard Had Zero Confrontations With Protesters During Biden Inauguration)

There is reportedly concern about troops being packed tightly with limited facilities, particularly during the ongoing coronavirus pandemic. Two Guardsmen told Politico that at least 100 fellow troops have tested positive, some of whom are quarantining in hotels.

In response to Politico’s report, several lawmakers criticized the decision and some even offered their offices to the Guardsmen.

“This is outrageous, shameful, and incredibly disrespectful to the men and women keeping the U.S. Capitol safe and secure. We need it fixed and we need answers on how it happened,” Democratic Arizona Sen. Kyrsten Sinema said in a tweet.

“My office is available; the Guard is welcome to it. There is plenty of space in the US Capitol for the men and women keeping us safe,” she added. 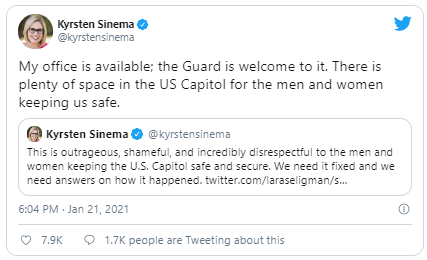 “Earlier this evening my staff reached out to @TexasGuard leaders to make sure #TX Guardsmen are okay & that they’re being taken care of while serving in our Nation’s capital,” Republican Texas Sen. Ted Cruz said. 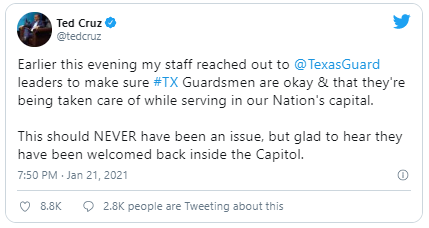 “If this is true, it’s outrageous. I will get to the bottom of this,” Senate Majority Leader Chuck Schumer said about the report. 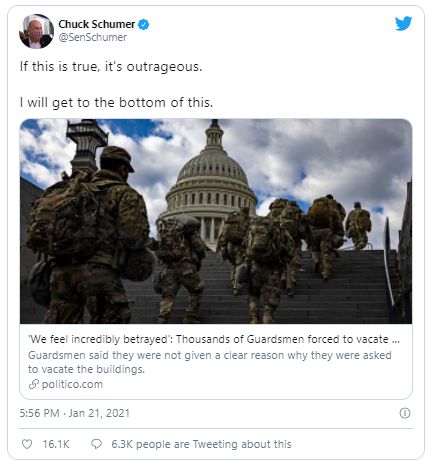