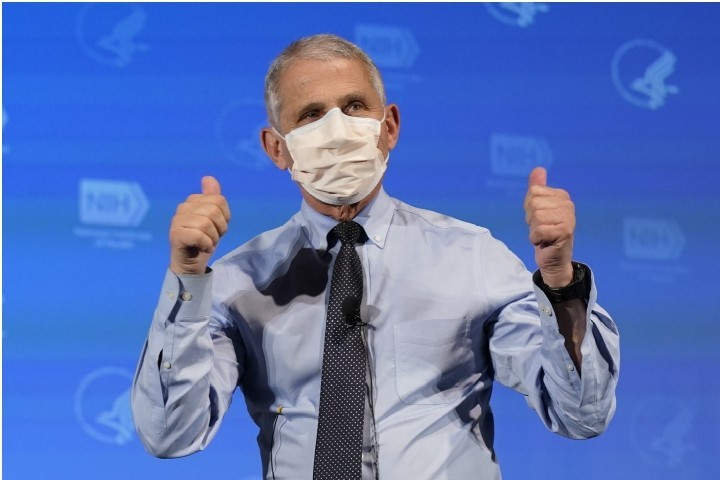 Now that the Democrats are in control of the White House and both houses of Congress, expect a more statist and authoritarian approach to most policy issues. Coronavirus response is a case in point. Under the Biden administration, all options are “on the table.”

Now the chief medical advisor to the president, Fauci told Newsweek: “Everything will be on the table for discussion” when the magazine asked him about the prospect of vaccination passports and mandatory vaccine administration.

He couched his response just a bit, noting that typically the federal government doesn’t do the dirty work of forcing health policies on people uniformly across all the states. “We almost never mandate things federally [with regards to health],” Fauci said, according to Newsweek.

Regarding vaccine passports, Newsweek noted that Israel has announced plans to issue a “green passport” based on vaccination against COVID that would enable a holder to skip quarantines and travel more freely.

Taking the form of a smartphone app, the Jerusalem Post described the friendly interface the “green passport” will offer.

“It looks like many other apps, with a colorful design and pictures,” the Jerusalem Post reported. “The home screen, in the demo version released on Monday, includes options for Hebrew, Arabic, Russian and Amharic. There will be a separate travel document in English for those traveling abroad and a chart released along with the demo says the app will be available in English as well, although the demo is not.”

It is not uncommon for state propaganda to feature and/or target children and family ties to children. That’s a strategy adopted by the app as well.

“The colorful design features a drawing of a child holding what looks like a container of popcorn facing two adults on a couch, presumably his parents. The message on the home screen says that the app will tell you if there is any risk to you nearby,” said the Jerusalem Post

It’s a friendly app, not one that represents a government claiming that it owns the rights to regulate minutely the fundamental aspects of your very life.

The reality, though, is that the friendly front the app presents to “users” hides the sharp teeth of government just behind the LCD curtain.

The Israeli passport plan is finding favor internationally, according to sources cited by the Jerusalem Post. Health Minister Yuli Edelstein told the paper: “I talked to my counterparts in other countries and they were very enthusiastic about the idea of the green passport, working to create an international alliance that would allow the movement of citizens to have a green passport. The potential for issuing it is huge.”

Instead of the fundamental affront to liberty that issuing a state license to engage in activities that are none of the government’s business or concern such as attending a concert, shopping, going to work, or attending a sporting event represents, Edelstein suggest the passport is in reality a means of escaping lockdown.

He noted, according to the Jerusalem Post, that “the heads of authorities and many in the public support me…. Enough with this sort-of lockdown.”

According to Anthony Fauci, a system something like that in Israel could be coming to America.

When asked about this, according to Newsweek, Fauci answered, “Anything is on the table. Anything is possible, of course.”

There are already several competing projects aimed at producing a vaccine passport to track and control American citizens. IBM and Salesforce are partnering on the development of what IBM calls its Digital Health Pass.

“IBM Digital Health Pass, part of IBM Watson Works, is designed to provide organizations with a smart way to bring people back to a physical location, such as a workplace, school, stadium or airline flight,” the company says. “Built on IBM Blockchain technology, the solution is designed to enable organizations to verify health credentials for employees, customers and visitors entering their site based on criteria specified by the organization.”

As with the Israeli green passport effort, the IBM platform is being sold as a way for people to return to normal life. “Individuals can share their health pass to return to the activities and things they love, without requiring exposure of the underlying personal data used to generate the credential,” IBM says.

Perhaps the leading effort to build a COVID passport comes from the World Economic Forum, the very organization that so desperately wants a “Great Reset” that would eliminate private property in exchange for building what amounts to a world-wide technocratic socialist state.

The WEF platform is called Common Pass. According to the organization, “Built on the Common Trust Network, the CommonPass Platform lets individuals present the health information they have accessed from Common Trust Data Sources to demonstrate that they meet the health entry requirements of their destination. If they meet the requirements, the platform generates a simple yes/no CommonPass Certificate that they can use to demonstrate their compliance without revealing any personal health information.”

Perhaps this sounds innocuous or even innocent — nothing more than a good-faith effort to help people overcome the pandemic.

But, programs such as this set the stage for governments and international partner agencies to implement dangerous future possibilities. These apps and platforms will track people. What is being tracked can be controlled, something that is particularly important in the case of technologies such as these that are expressly designed to control access to goods and services or even work and careers. It would be easy for these systems to include a layer built on the concept of something like China’s social-credit score that would allow agencies and governments to use systems such as these to bar those with undesirable thoughts and actions from accessing the essentials of life.

Say the wrong thing on Twitter or Facebook now, and your account is banned. In the digital ID passport world that is being built, that same switch could be flipped just as quickly and easily keep you from work, your bank accounts, travel, and more.

It all starts with a vaccine passport and the potential for mandatory vaccination.

These things are on the table for consideration in their foundational form as health passport IDs.

“It’s not up to me to make a decision,” Fauci told Newsweek. “But these are all things that will be discussed.”