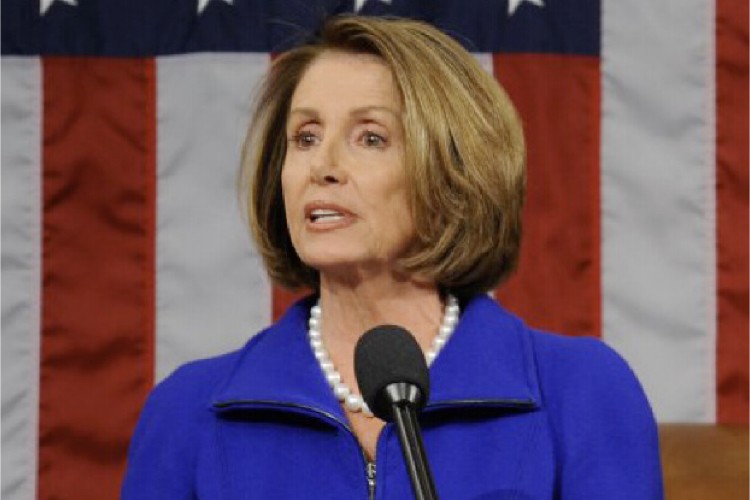 Ten years ago, House Speaker Nancy Pelosi praised the occupation of the Wisconsin Capitol building as an “impressive show of democracy in action.” Since then, however, her attitude toward capitol incursions has changed notably. Not only does she describe the January 6 Capitol riot as an “insurrection,” but she’s calling Donald Trump an accessory to murder for allegedly encouraging it.

For the record, last year’s CHAZ, or Capitol Hill Autonomous Zone, takeover of part of Seattle was by definition an insurrection, though a lame one (not nearly as lame, however, as the January 6 effort would have been had it been an insurrection).

For the record, the goal of Antifa — which was involved in most or virtually all of last year’s 570-plus left-wing riots — is the overthrow of our government. Yet while Trump had told the Capitol Hill protester to go home after the violence erupted, Kamala Harris said in the wake of the left-wing riots that the protests “should not” stop.

And for the record, none of these Democrats care at all about their hypocrisy. In fact, as previously stated, Pelosi is doubling down. As the Daily Mail reports, Speaker “Pelosi said President Donald Trump could be an accessory to murder for his role in inciting the MAGA mob that rioted on Capitol Hill.”

“‘If you’re Donald Trump talking to these people, they believe it and they used his words to come here,’ Pelosi told MSNBC. ‘If they did, they would be accessory to the crime. And the crime, in some cases, was murder,’ she added.”

“Pelosi led second impeachment vote for Trump in the House, charge was ‘incitement of insurrection,’” the paper continued.

This is coming from the woman who said last year, in response to lawless mobs tearing down statues, “People will do what they do.”

Demagogues will do what they do, too. Noting the hypocrisy, commentator Marc A. Thiessen wrote in the Washington Post (of all places!) January 14 that the “Democrats were for occupying capitols before they were against it.” He was alluding to what I mentioned earlier and what ex-Wisconsin governor Scott Walker pointed out in the recent tweet below: 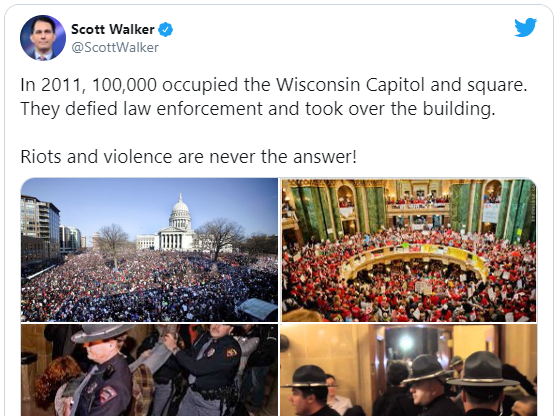 By the way, this February-March 2011 event was “the longest continuous occupation of a major government building in the history of the United States,” Isthmus.com points out. And Pelosi’s reaction? Aside from the aforementioned, she also tweeted the following:

(Evidencing how immune to consequences Deep Staters believe they are, they don’t even delete such tweets.)

Speaking of Deep Staters, Senate Republican Leader Mitch McConnell also piled on Trump. “The mob was fed lies,” the Mail also tells us. “‘They were provoked by the president and other powerful people,’ he said in a dramatic speech on the Senate floor.”

House Minority Leader Kevin McCarthy chimed in, saying that the “facts require immediate action by President Trump, [to] accept his share of responsibility, quell the brewing unrest and ensure President elect Biden is able to successfully begin his term.”

You mean, just as how President Trump was allowed in 2017 to successfully begin his term?

But let’s talk about being fed lies, provocation, responsibility, and “quelling” unrest. Last year’s hundreds of left-wing riots — involving looting, the damaging/destruction of thousands of businesses, and murder — were catalyzed by the lie that there’s a police war on black people. And how did the Democrats respond?

The Spectator USA’s Amber Athey reminded us, writing September 1 that “House Judiciary Committee Chairman Jerry Nadler called Antifa [sic] violence in Portland a ‘myth’ when approached about the subject in June. Mayor Muriel Bowser bragged in her Democratic National Convention speech about creating ‘Black Lives Matter Plaza’ in Washington, DC for the protesters, but did not mention some of those protesters torched the historic St John’s church outside of the White House.”

“Seattle Mayor Jenny Durkan described her city’s ‘autonomous zone,’ which was forcibly taken over by armed protesters and where a black teenager would later be shot dead, as a ‘block party atmosphere,’” Athey continued. Moreover, “Rep. Ayanna Pressley went several steps further than her peers, encouraging ‘unrest in the streets’ during an MSNBC interview in August,” the writer also informed.

Moreover, Harris even “promoted a bail fund intended for protesters [rioters] in Minnesota,” Athey adds. And the now-vice president actually said in a June interview on The Late Show With Stephen Colbert, almost giddily, that the “protests” “should not” let up (video below. Relevant portion begins at 5:25). 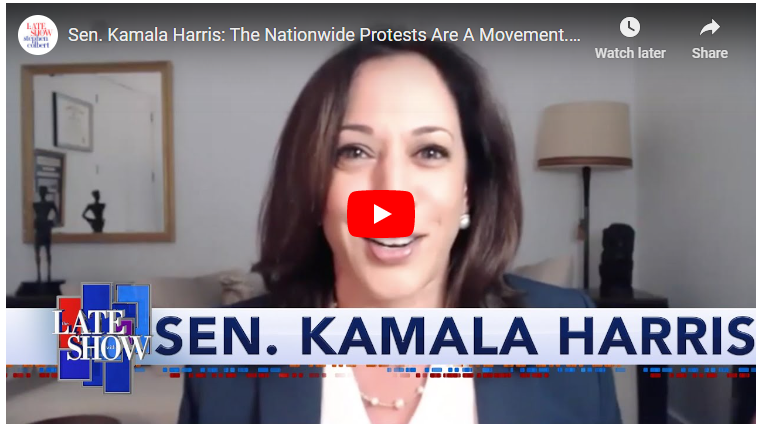 Pelosi doesn’t let up, either, and this brings us to some advice she has for Trump. “If I had to leave him a note, it would be very short. Man up. Concede the election, nothing more,” she said, the Mail further relates.

This is interesting because four months into President Trump’s term, Pelosi tweeted the following:

A month later, a leftist tried to assassinate Republicans at a congressional baseball practice.

Add to this that Pelosi helps lead the party of prenatal infanticide, and it seems there may be plenty of accessory-to-murder charges to go around. So whence comes the self-righteousness, Nancy?

Then again, maybe she believes what Joseph Stalin articulated thus: “When you kill one man, it’s murder. When you kill 50,000, it’s a strategy.”