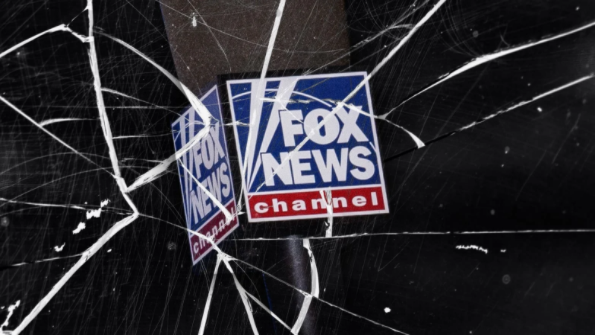 Fox laid off at least 16 staffers, including Chris Stirewalt, who defended the election-night call that pissed off Trump. Insiders say the firings are part of an ideological purge.

By Diana Falzone and Lachlan Cartwright

Fox News on Tuesday fired the political editor who was tasked with defending the network’s election night decisions that especially angered President Donald Trump and his allies.

Politics editor Chris Stirewalt’s exit from the network coincided with the sacking of at least 16 digital editorial staffers, including senior editors. People familiar with the situation said the layoffs—a “blood bath,” as multiple Fox News insiders described it—were perpetrated by Porter Berry, the Sean Hannity crony now in charge of remaking Fox’s digital properties in the image of its right-wing opinion programming.

In addition to Stirewalt—the Fox News “nerd” who became the face of the network’s election-night projection for Joe Biden to win Arizona, which angered much of the network’s MAGA viewership and led to the rise of an even more obsequious, pro-Trump alternative in Newsmax—sources confirmed that long-time digital editors and reporters, some of whom had been with Fox for a decade or more, were among those laid off. (Additionally, on Monday morning, Fox News senior vice president and D.C. managing editor Bill Sammon, who is in his early 60s, announced he is “retiring at the end of the month.”)

Officially, the network claimed the layoffs are merely part of a “restructuring” initiative. “As we conclude the 2020 election cycle, Fox News Digital has realigned its business and reporting structure to meet the demands of this new era,” a spokesperson said in a statement. “We are confident these changes will ensure the platform continues to deliver breakthrough reporting and insightful analysis surrounding major issues, both stateside and abroad.”

But a dozen current and recently departed Fox News employees who spoke with The Daily Beast all said the “purge”—as a few characterized it—was part of the network’s larger effort to pivot its website from straight-news reporting to right-wing opinion content in the mold of Fox’s primetime programming.

“There is a concerted effort to get rid of real journalists,” said one recently departed Fox staffer. “They laid capable people off who were actual journalists and not blind followers.”

Others said it was an attempt to silence leakers from speaking to outside media about the changes being instituted by Porter Berry, a former producer for Hannity and Bill O’Reilly, who recently transitioned from the TV side to running Fox’s digital properties.

“Porter’s uncomfortable around and is suspicious of experienced editors,” one Fox News insider remarked to The Daily Beast. “They make him feel inept because his background is entirely in TV.”

“Porter is at the helm,” one current employee declared of the layoffs, while a recently departed staffer said: “This is all Porter. Both an ideological purge and a purge of people he was threatened by.”

“It’s essentially the final nail in the coffin for digital journalism at Fox,” another recently departed staffer declared.

Even before this round of layoffs, Berry’s management and editorial style had resulted in the departures of several key employees, such as Jason Ehrich, former executive vice president of audience development and strategic partnerships, and Greg Wilson, the former managing editor of the Fox News website, among others.

As The Daily Beast reported, Berry’s influence over the network’s online properties has raised eyebrows among staffers, largely because he continues to act as a “shadow executive producer” for Hannity—yet another sign of the increasingly blurred lines at Fox between the network’s right-wing opinion commentary and its so-called news division.

The ouster of Stirewalt came months after he publicly defended the Fox decision desk’s early (and accurate) election-night projection of Joe Biden winning Arizona’s votes. The on-air call immediately infuriated President Donald Trump, as such a projection by his then-favorite network inhibited his plans to prematurely declare victory that evening. “Jared, you call the Murdochs! Jason, you call Sammon and Hemmer!” Axios reported Trump shouting that night at his son-in-law Jared Kushner and top adviser Jason Miller.

Immediately following the Arizona call, which has been linked to angry Trump fans abandoning the network for even more fact-free, right-wing outlets like Newsmax, Stirewalt was repeatedly grilled on-air over the projection and asked whether his team would reverse its call. “Not that I see,” Stirewalt said, standing by decision desk director Arnon Mishkin’s analysis.

“Lawsuits, schmawsuits,” he said the day after the election. “We haven’t seen any evidence yet that there’s anything wrong.”

Though the network never backed off its Arizona call, and followed other major news outlets in calling the entire election for Biden days later, Stirewalt soon apparently found himself on the outs at Fox News.

Despite having been a regular on-air presence for years—including playing a pivotal role in the Fox’s 2012 election night drama in which he was forced to go on-air to defend effectively calling the election for Barack Obama—Stirewalt did not make a single network appearance after November 16.

Stirewalt’s final contribution for Fox News was a Monday afternoon digital post, titled “Put that in your Hot Pocket.”

—Maxwell Tani, Justin Baragona, and Andrew Kirell contributed additional reporting. Diana Falzone was an on-camera and digital reporter for FoxNews.com from 2012 to 2018. In May 2017, she filed a gender discrimination and disability lawsuit against the network and settled, and left the company in March 2018.