Biden will use bureaucracy to advance green energy boondoggles 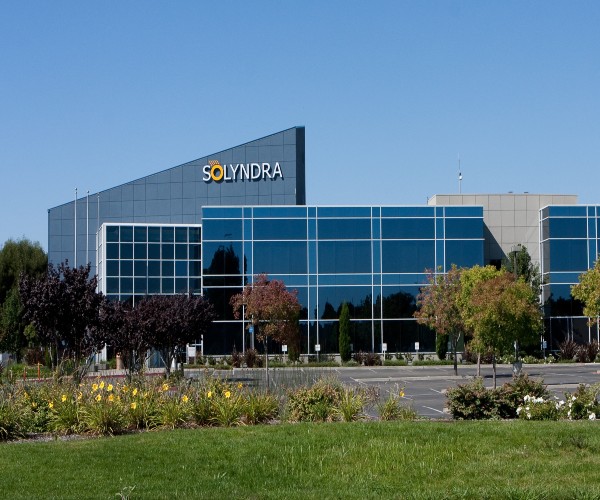 The closed status at one of the Solyndra buildings after suspending operations. Solyndra laid off about 1100 full-time and temporary employees, and filed for Chapter 11 bankruptcy. Solyndra made photovoltaic solar power units. Sept. 19, 2011. (Duane R. Stevens/Dreamstime.com)

Biden will use bureaucracy to advance green energy boondoggles

In case you’ve forgotten, it was a California solar panel developer that defaulted on a $535 million Obama-Biden administration Department of Energy stimulus loan guarantee that, along with four other bankrupted companies, collectively left U.S. taxpayers on the hook for more than $2.2 billion.

According to documents obtained by The Washington Post, the White House had pressed the Office of Management and Budget to greenlight the loan in a hurry.

In response, OMB officials reportedly expressed concern that they were being rushed to approve the company’s project without adequate time to assess the risk to taxpayers.

Energy Department and OMB analysts had reportedly questioned the wisdom of the loan which analysts determined, based upon Solyndra’s own numbers, would rapidly run out of cash.

Another of those bankruptcies involved a 2019 DOE $528.7 million loan it gifted to Fisker Automotive, a start-up company promoted by then-Vice President Joe Biden in his backyard of Newport, Delaware.

According to then-Energy Secretary Steven Chu, Fisker would develop two lines of plug-in hybrid cars that would ”save hundreds of millions of gallons of gasoline and offset millions of tons of greenhouse gas emissions by 2016,” and ”result in approximately 5,000 jobs created or saved for domestic parts suppliers and thousands more to manufacture a plug-in hybrid in the U.S.”

When their green-energy boondoggle went belly up, zero cars had been manufactured in the United States — despite the hefty cost footed by America.

Whereas intricacies of the deal are tangled, bankruptcy documents related to Fisker’s fiscal failure curiously listed Joe Biden’s son, [Robert] Hunter, along with a brother of Delaware Attorney General Beau Biden as creditors.

Also, curiously, Fisker was later purchased at auction by Wanxiang, a Chinese conglomerate, after being ”enticed” by Fisker creditors.

Wanxiang also reportedly has ties to Hunter Biden. The foreign company had invested $1.25 billion into a different company that was a client of Seneca Advisors, Hunter’s consulting firm.

In February 2009, Doerr, whose firm, Kleiner Perkins managed a $100 million tech fund, had been appointed by the Obama-Biden administration to sit on an economic recovery board. CNET reported of his appointment: ”Not-so-coincidentally, Doerr has lobbied for laws at the state level — and, more recently, as part of the ‘stimulus’ proposal — that would benefit his portfolio by moving toward smart grid, solar, and other technology.”

Although a Biden staffer told The Wall Street Journal that he made ”no direct appeals” to DOE prior to the loan’s approval, the agency’s reportedly had ”repeated discussions with Vice President Biden and his staff.”

When Secretary Chu ran into Biden at an event, he reportedly told him, ”I know, I know — Fisker.” The loan was approved five days after that conversation.

Joe Biden’s new nominee to head DOE is former Michigan Gov. Jennifer Granholm, Biden’s selection for Energy secretary who brings lots of her own experience in the boondoggle department.

During her governorship from 2003 to 2011, Granholm handed out hundreds of millions of dollars to politically favored startups to create ”green jobs,” of which many failed.

One of those companies was A123 Systems, a fledgling electric-car battery manufacturer that received a $249 million DOE grant plus another $125 million in Michigan state tax credits.

Then, as coincidences never seem to cease, A123 went bust in 2012 about the same time its customer — none other than Fisker Automotive also did — and also, like Fisker, its assets were purchased by China’s Wanxiang group.

Granholm also offered battery manufacturer LG Chem $125 million on top of the $150 million in DOE stimulus dollars it received. LG Chem apparently ran out of clean energy when its employees were caught watching movies and playing games around the clock because they ostensibly had little productive to do.

Mascoma, a biofuels startup, got $20 million from Granholm and up to $100 million from DOE for a plant that was never built to convert biomass into cellulosic ethanol.

Granholm also approved $100 million for a renewable energy park that was scrapped.

According to the Mackinac Center, a Michigan think tank, only 2.3% of Granholm’s investments in the state’s main incentives program met their job creation promises.

Perhaps there is a history in all of this worth learning from as Democrats promise once again to finally save the planet from billions of years of climate change and create millions of green jobs with boatloads of green taxpayer cash.

Before we buy into that $2 trillion Green New Deal, let’s demand a credit history reference report.