12,400 People in Israel Tested Positive for Coronavirus AFTER Being Injected with the Experimental Pfizer COVID Shot 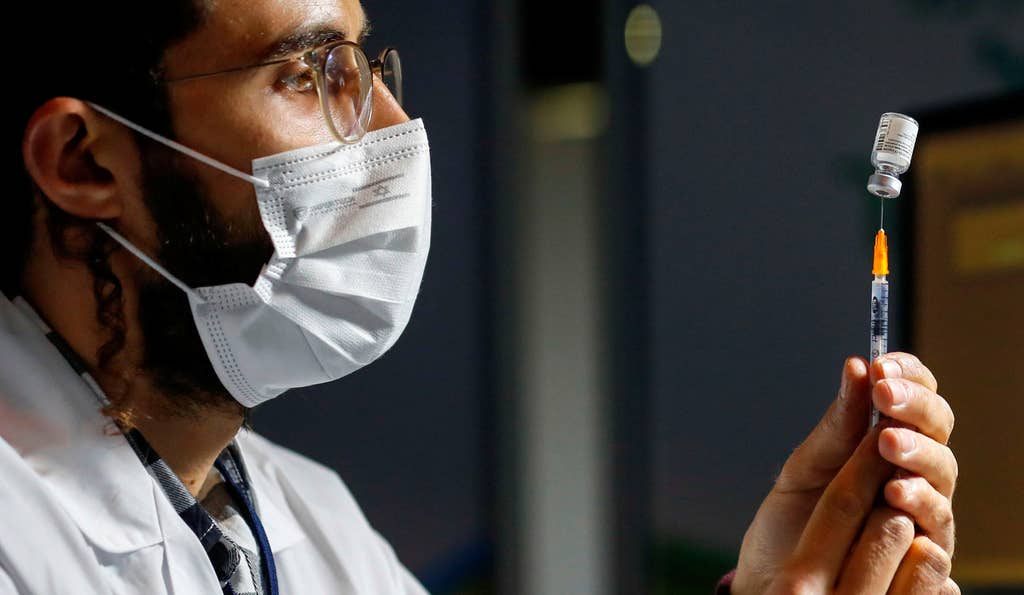 An Israeli healthcare worker prepares a dose of the COVID-19 vaccine for people queuing at the Kupat Holim Clalit clinic in Jerusalem, on January 14, 2021.Credit: AHMAD GHARABLI – AFP

12,400 People in Israel Tested Positive for Coronavirus AFTER Being Injected with the Experimental Pfizer COVID Shot

By Ido Efrati and Ronny Linder

Over 12,400 Israeli residents have tested positive for COVID-19 after being vaccinated, among them 69 people who had already gotten the second dose, which began to be administered early last week, the Health Ministry reported.

This amounts to 6.6 percent of the 189,000 vaccinated people who took coronavirus tests after being vaccinated.

According to the ministry’s data, 5,348 people were found infected up to a week after getting the vaccine, of the 100,000 people who were vaccinated and then tested a week later – an infection rate of 5.4 percent of those vaccinated during that time.

Another 5,585 people tested positive for the virus between the eighth and 14th day after getting the first vaccine – 8.3 percent of the 67,000 people who were vaccinated and tested during that post-vaccination period.

People were also testing positive more than two weeks after getting the first dose, between the 15th and 21st day, a period during which partial immunity is already meant to be in effect. Of the 20,000 people tested during this post-vaccine period, 1,410 people tested positive, some 7.2 percent. Of the 3,199 people who took coronavirus tests between day 22 and day 28 after the first vaccine, 84 were found to be positive (2.6 percent), including 69 people who had already been vaccinated twice.

Some 2.15 million people have been vaccinated in Israel over the past month, of whom 300,000 have already gotten a second dose.

Read the full article at Haaretz.com.

Doctors Around the World Issue Dire WARNING: DO NOT GET THE COVID VACCINE!!

Louisiana Woman Convulses Uncontrollably after Being Injected with the Experimental Pfizer COVID Shot – “I can’t stand to see my mom this way it makes me want to cry knowing I can’t do anything to help her.”

Is the Tennessee Nurse Who Passed Out on Live Camera After the COVID Vaccine Still Alive?

Having problems receiving our newsletters? See:

How to Beat Internet Censorship and Create Your Own Newsfeed

We Are Now on Minds.com, MeWe, Gab, and Parler (currently down)!

If our website is seized and shut down, find us on Minds.com, MeWe, Gab, and Parler for further instructions about where to find us.

Is God’s Judgment About to Fall on America? What is the “Mark of the Beast”?

The Satanic Roots to Modern Medicine – The Mark of the Beast?