MyPillow Being “Cancelled” Because Founder Questions the Stolen Election 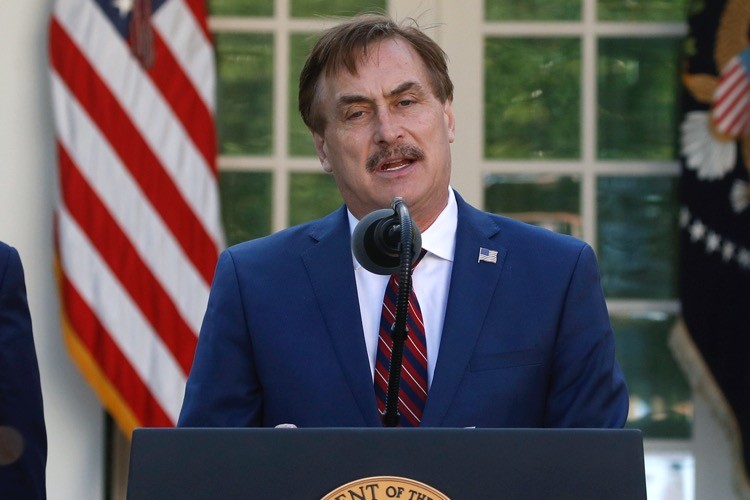 MyPillow Being “Cancelled” Because Founder Questions the Stolen Election

If it really is true that the “softest pillow is a clear conscience,” we may have to wonder how the executives at Bed Bath & Beyond, Kohl’s, H-E-B, and Wayfair will be sleeping in the near future. For governed perhaps by fear and lust for money, these retailers are now refusing to sell the popular MyPillow products. The reason?

MyPillow founder and CEO Mike Lindell is a Trump supporter who visited the White House Friday to sound the alarm about the stolen 2020 election.

Lindell revealed the cancel-culture effort during a Monday interview with commentator Brian Glenn on Right Side Broadcasting Network. “‘Just got off the phone with Bed Bath & Beyond. They’re dropping My Pillow.… Kohl’s, all these different places,’ Mr Lindell said in the interview,” relates the Independent.

“‘These [companies], they’re scared, like a Bed Bath & Beyond, they’re scared. They were good partners. In fact, I told them, ‘You guys come back anytime you want,’ he added,” the paper continues.

Lindell had also attracted attention because, during his White House visit, he was reportedly holding notes relating to the possibility of invoking the Insurrection Act to deal with possible foreign interference in the election. Lindell stated on Monday’s Tucker Carlson Tonight, however, that he was carrying a large packet of documents and that the Insurrection Act possibility was just one of many scenarios presented by those helping compile the information.

Sadly, Lindell’s plight is yet another example of how this is no world for honest men — and how, today, you get no credit for epitomizing the American dream if you oppose an anti-American scheme. Lindell’s is quite the story, too. As CNBC reported in 2017:

Mike Lindell says there aren’t many crack addicts who’ve become successful, but he’s one of them.

“It can be done, people,” he laughed.

The self-made multimillionaire and infomercial superstar created the MyPillow empire from scratch in 2004. He did it while addicted to drugs. “People say all the time that’s one of the biggest miracles ever.”

He’s been clean and sober for over eight years, but his path from rags to riches — and almost back to rags — is an amazing American success story.

Lindell quit college after one quarter in 1979 or ’80 and tried earning money in various ways, from carpet cleaning to card-counting at Las Vegas casinos to raising hogs to running a lunch wagon to owning a bar. But he didn’t really hit pay dirt until the idea for MyPillow came to him in a dream.

“‘I got up in the middle of the night — it was about 2 in the morning — and I had ‘My Pillow’ written everywhere in the kitchen and all over the house,’” he said, CNBC relates. When Lindell asked his daughter what she thought about the idea, however, her reaction was priceless. “That’s really random,” she said, before walking away. The rest is history.

Transitioning from dreams to nightmares, there’s nothing random about the way Lindell — and, more significantly, credible election-fraud claims — have been demonized by a Borg-like, monolithic mainstream media (MM). Read the relevant reportage, including in the Independent cited above, and you’ll see that the phrase “election-fraud claims” is always modified with “baseless” or “false.”

In fact, with how such terms consistently pepper MM articles, you could think these journalists were comparing notes. This wouldn’t be surprising, either, since they’ve been exposed doing precisely that in the past.

Just consider the 2010 JournoList scandal, in which it was discovered that 400 left-wing journalists, academics, and other assorted pseudo-intellectuals were conspiring via a private, online Google group to prop up then-president Barack Obama.

So the MM do have great knowledge of falsity — by way of its practice. For another example, figures at CNN were caught in hidden video in 2017 admitting that the Trump-Russia-collusion narrative was nonsense. This didn’t stop them from pushing it, though.

Yet after spreading a nation-rending falsehood for years — that Russia helped Trump steal the 2020 election — and sparking rioting and general discord, the MM now are helping put the last nail in our Republic’s coffin: They’re conspiring to prevent the uncovering of an actual stolen election, of what was essentially a coup d’état against a sitting president.

In this, the Left argues triumphantly that Republicans’ election-fraud cases have been “laughed out of court.” Yet note here that a “competent rhetorician need have nothing at all to do, they say, with truth in considering things which are just or good, or men who are so,” as ancient Greek philosopher Plato put it. “For in the courts they say, nobody cares for the truth about these matters, but what is convincing.”

One of American history’s most notorious gangsters was Al Capone. Yet the government could never prove his great crimes — whether murder, extortion, theft, or something else — in court. All they could do, finally, was get him on tax evasion.

As for Lindell, though, he may get his day in court (for whatever that’s worth now). In a letter dated December 23, attorneys for Dominion Voting Systems asserted that Lindell has been defaming them and demanded he cease and desist, under threat of legal action. Dominion has been making the rounds issuing this threat to various entities (including at least one for which I sometimes write).

Yet unbowed, Lindell said he welcomes the suit. “I want them to sue me. Please. Because I have all the evidence, 100%,” CBS News reports him as saying. “I want all the American people and the world to see the horrific things that these (Dominion voting) machines are capable of and what they did to our country and what — they’re allowing other countries to steal our election and just to hijack our election.”

So we’ll find out if Dominion is truly aggrieved or is bluffing. Because this time they’re up against a man whose principles are as firm as his pillows are soft.