Does Joe Biden Mean What He Says About Healing And Unity? 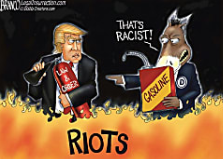 Does Joe Biden Mean What He Says About Healing And Unity?

A couple of contradictory things I’ve heard Joe Biden say recently show that he has been lying to America.

He stated not long ago that he wants to “heal” America and end our division. But his party has been on a cancel culture rant since the November 3rd election and has forced companies like AT&T and Marriott to deny their services and employment to any Trump supporters. This type of get-even policy cannot lead to healing and will only lead to further division between Americans. But Biden has said nothing contrary to his party’s official statements of hate and disgust for Trump and his supporters and has not told his party members to stop this divisive action.

Another area of confusion pertaining to Joe Biden is his long-time verbal support for the Defund The Police movement, while in his televised speech on Thursday (January 14, 2021), he specifically expressed sorrow for the police officers, and other unfortunate Americans, who are out of work due to the covid lockdown in Democrat states. So which is it: does he want full employment for police forces, or does he want to unemploy all of them? Does he want unity and healing in America, or does he intend to punish all supporters and voters of the previous president?

All of this, of course, depends on whether or not Joe Biden knows what day it is or if he thinks he’s still a Senator rather than being a newly-elected president. If the mild-mannered Biden is in charge and means what he’s said, then he needs to talk to his staff and act like he wants to restore unity, otherwise, we’ll have to assume that leftist radicals dedicated to Kamala Harris are in charge of the Biden administration and that it’s full pedal-to-the-metal demonization of the seventy-four million Americans who did not vote for Biden in 2020, and will not vote for him in the next election, assuming that Democrats intend to allow a “next election” to be held.

Is Biden in charge of his administration or is his persona of being a kind old man just being used by leftist radicals to get power and then push the old guy aside and rule as leftists the world over always rule?

Does Biden have plans for the future beyond breakfast tomorrow morning, and what are those plans? The months he spent “campaigning” in his basement, and the few actual questions that the leftist press lobbed at him, along with the evasive answers he gave to these non-threatening, softball questions, gave us no idea as to what he believes about anything of substance. So that leaves people believing that he only believes what he’s told to believe, so the future for Americans under his administration is unknown and frightening to anyone who understands the threats posed by the political left, and to those who value our constitution and our liberties.

At the present moment, there is definitely an air of totalitarian flavor in the forecast for America, based on the way Democrats are behaving. And to all appearances, based on the way they intend to rule once they are in office, Joe Biden knew what he was talking about when he predicted a “dark winter“ ahead for America, and especially for American Republicans.