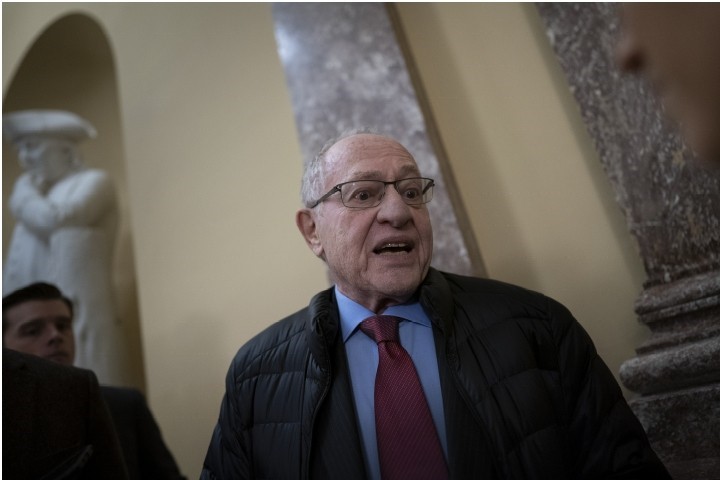 “We all hear that the president is not above the law,” Dershowitz explained, “but Congress is not above the law: When Congress impeached the president earlier this week, they committed six independent violations of the Constitution.” Dershowitz is not a conservative Republican, but rather a well-known liberal Democrat, providing additional weight to his opinion that Congress’ impeachment of Trump flies in the face of the provisions of the Constitution on the issue of impeachment of a president.

While impeachment can be used against executive-branch officers or judicial-branch judges, if members of Congress violate the Constitution, there is no real way to hold them accountable other than voting them out, Dershowitz explained: “But the only sanction is to vote them out of office and to bring them to trial in the court of public opinion. Senators and congressmen are immune from lawsuits for what they do or say on the floor of the Senate, so there can’t be any personal lawsuits.”

Dershowitz argued that Trump’s effort to challenge the results of the Electoral College in the House is not grounds for impeachment. “How can you impeach a president for a speech that is constitutionally protected?”

“The Constitution is very clear,” Dershowitz continued, “the purpose of impeachment is removal,” and Trump will be out of office before any trial will be held in the Senate. He cited the historical example of President Richard Nixon, who resigned when it became clear that he would be impeached by the House and then convicted by the Senate, noting that Nixon’s resignation ended any such proceedings in Congress.

Why? “The Senate cannot try an ordinary citizen.”

Earlier in the week, Dershowitz called the effort to impeach Trump so as to stop him from running again in 2024 “an absurd, ridiculous, unconstitutional argument.”

The Democrat argument for impeaching Trump is that his claims that there was rampant election fraud led some of his supporters to invade the U.S. Capitol on January 6, while Congress was meeting inside the building debating whether to reject some of the electoral votes from states such as Arizona.

“It’s unconstitutional to impeach a president when you can’t put him on trial while he’s still the president. The jurisdiction of Congress to try a president or anybody else is limited to somebody who is sitting in the office,” Dershowitz said on Spicer & Co, another Newsmax TV program.

“It [the Constitution] says the president and vice president shall be removed from office on impeachment. So, if he’s already out of office, he cannot be tried. You can’t impeach him just in order to try and stop him from running. If they could, they could impeach you, Sean, they could impeach me…. Could they hold me in front of the Senate and say we’re impeaching you solely to make sure you don’t run in 2024?”

“It’s the right to petition government for a redress of grievances. To turn that into impeachable offense is to turn the Constitution on its head,” Dershowitz concluded.

Byron York of the Washington Examiner wrote, “Democrats started trying to remove President Donald Trump from office before he entered office. Now they are proposing to remove him from office after he leaves office.”

York is a conservative columnist who has criticized Trump on occasion, but he also views this attempt to try private citizen Trump as unconstitutional. He cited J. Michael Luttig, a former judge on the U.S. Court of Appeals for the Fourth Circuit, in support of his contention.

“It’s the impeachment that is the authority for the disqualification,” Luttig said. York added, “And a former president, by definition, cannot be removed from office.”

It would require a two-thirds vote of the Senate, or 67 votes, to remove Trump from office and to disqualify him from ever holding office again. The Senate is equally divided, 50-50, and Vice President Kamala Harris would have no vote. (The vice president is, by the Constitution, the president of the Senate, but in any impeachment trial of the president, the Chief Justice of the Supreme Court presides over the Senate instead.)

It is highly unlikely that the 17 Republican votes necessary to convict could be obtained. And, even if Democrats were able to get 17 Republicans to vote to convict and add the disqualification from ever holding office again, York said it was likely that Trump would take the case to court. Luttig does not think the federal courts would refuse to hear such a case in deference to the legislative branch because such a step would raise a highly contentious constitutional question, not just a “political question.” Furthermore, if 17 Republican senators do vote to convict and remove Trump from office, it could destroy the Republican Party as we know it, especially if Trump takes the case to court and wins and runs again in 2024.

Steve Byas is a university instructor of history and government and the author of History’s Greatest Libels. He may be contacted at byassteve [at] yahoo.com.