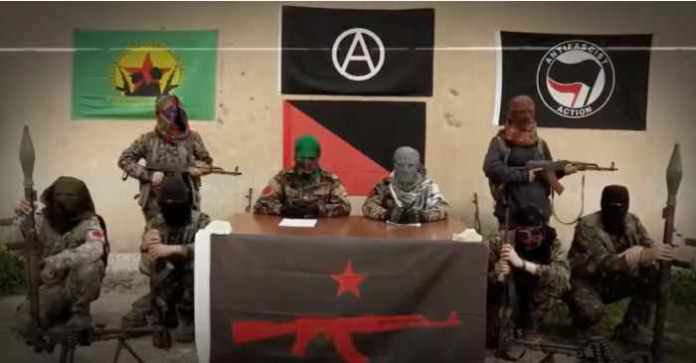 Some Antifa, the Democrat brown shirts, trained in Syria with the terrorist group, YPG. Jack Posobiec made an Antifa movie including the information, but he was dismissed for making an issue of it. YouTube and Vimeo censored the movie. You can watch it on BitChute.

Now we have Daniel Allen Baker under arrest for planning an attack on Trump supporters on Inauguration Day in Florida. Baker trained in Syria and participated in the 2020 CHAZ occupation of Seattle.

HE ASKED OTHERS TO JOIN HIM

“Baker issued a call to arms for like-minded individuals to violently confront protesters gathered at the Florida Capitol this Sunday,” federal prosecutors said. “He specifically called for others to join him in encircling any protesters and confining them at the Capitol complex using firearms.”

Baker posted links to CNN on his “Call to Arms” to kill Trump supporters and police officers on Inauguration Day. He wanted to stockpile AK-47s and build bombs in CHAZ to start “the revolution.”

CHAZ IS THE ‘SUMMER OF LOVE’

If you will remember, the Democrats who run the state and the city didn’t have a problem with this for most of its existence. It was merely Mayor Jenny’s “summer of love.” They railed against any Federal involvement and blamed their police any time the terrorists of CHAZ complained. The police couldn’t do their job.

It was the summer of tough love with Antifa launching mortars, setting fires, pelting cops with rocks, and smashing stores.