The Capitol Hill Riot Was Pelosi’s Fault, Not Trump’s 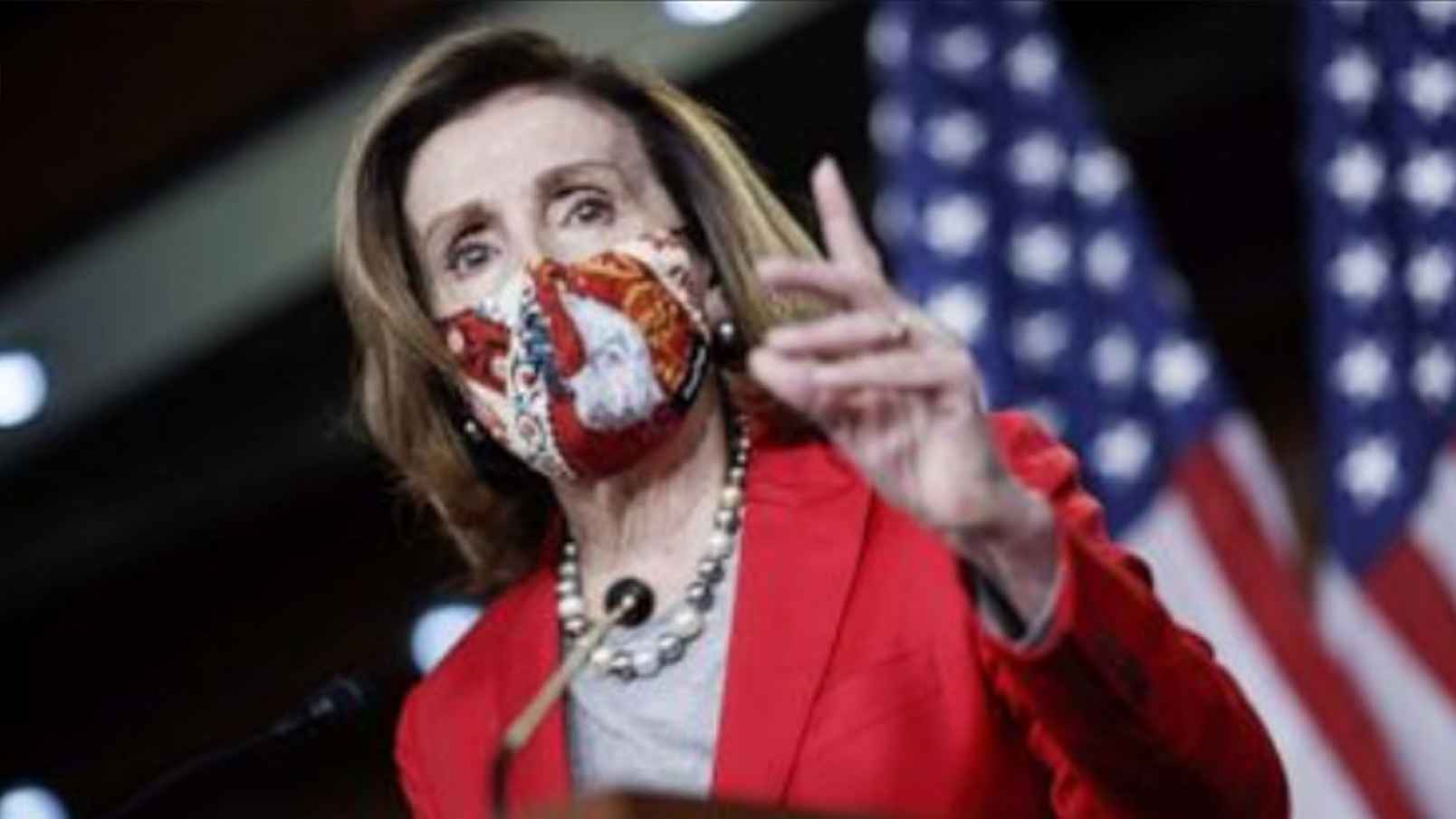 The Capitol Hill Riot Was Pelosi’s Fault, Not Trump’s

The Capitol Police have over 2,000 sworn officers. A police force dedicated to protecting Capitol Hill has more personnel in its service than the police forces of most of the country.

Congress’ private cops are the 19th largest police force in the country. It’s a larger force than the police forces of Atlanta, Baltimore, Denver, or Milwaukee with a massive $460 million budget.

It’s the only legislative federal force in the country that is answerable exclusively to Congress.

While Democrats advocated defunding the police, their private police force budget shot up from $375 million in 2016 to $460 million in 2020. After the Capitol Hill riot, expect it to go higher.

The media claimed that the Capitol Police were overwhelmed by a massive riot. Except that the number of violent rioters was, at most, in the hundreds, while the Capitol Police could deploy a force the size that protects entire cities to protect a few buildings from hundreds of people.

Media narratives have blamed President Trump for not calling out the National Guard, but the military should not have been needed to supplement a police force as big as those of Atlanta or Denver, but was not tied down with an entire city to police, and really only had one simple job.

And it catastrophically failed at that one job.

When Black Lives Matter rioters, incited by Democrats and the media, besieged the White House, 60 members of the Secret Service’s Uniformed Division were injured holding the line while President Trump and his family were taken to a bunker. 11 members of the Service were hospitalized due to the violence of the BLM riot that Democrats falsely claimed was peaceful.

Much of the heavy lifting was done by the Park Police, another one of the innumerable mini police forces swarming the city, which has only 641 sworn officers spread across three cities.

65 Park Police officers were wounded in the BLM riots and 11 had to be hospitalized.

This roughly matches the 60 Capitol Police and 58 D.C. cops injured in the Capitol riot.

Attorney General Barr listed a figure of 150 officers injured in total in the BLM riots in D.C.

That puts the lie to the false Democrat claim that those riots were peaceful and these weren’t.

The only objective metric for measuring what is and isn’t a riot is the amount of violence involved. Both sets of riots targeted a center of government, the White House for BLM and Capitol Hill for the alt-right, and the BLM riot was objectively more destructive.

In the Capitol riot, Brian Sicknick, a pro-Trump veteran, was struck on the head, suffered a brain clot and died. During the BLM riots, law enforcement officers suffered concussions. None died, but that’s a matter of luck, not restraint on the part of BLM thugs using clubs and bricks.

Despite the heavy toll on the injured officers from the Secret Service and the Park Police, Democrats and the media falsely accused both forces of violently assaulting “peaceful protesters”. Instead of condemning the violence which included bricks, bottles, fireworks, and bodily fluids being thrown at law enforcement officers, Democrats formed a lynch mob.

Rep. Grijalva demanded that White House fencing come down and that the head of the Park Police come down to testify. The Park Police were attacked for using tear gas. The Washington Post assailed a Secret Service officer for using mace against a BLM rioter attacking him.

Unlike the Capitol Police, the Park Police and the Secret Service did not kill a single BLM rioter despite provocations and bodily injuries. The same can’t be said of Congress’ keystone cops who managed to kill an unarmed woman who was not physically assaulting them at the time.

During the BLM riots, Democrats and their media considered mace against a violent assailant an overreaction, but think that shooting an unarmed woman who was not attacking anyone to be an underreaction proving that it’s not about policing, but that leftist lives matters, others don’t.

But the tactical question is why the Capitol rioters got into Congress and the BLM rioters never made it inside the White House. Intruders have gotten into the White House before, but the Secret Service and the Park Police kept the violent racist mob from getting through.

The White House has better security, but the question is why is Congress’ security so bad?

It’s not for a lack of money or manpower. The Capitol Police force is ridiculously huge. It has a massive budget. But it also has virtually no oversight except from a corrupt congressional system. The last time anyone paid attention to the Capitol Police, they were bungling the Awan investigation under pressure from Congressional Democrats. But that’s what the ‘Caps’ are for.

The Capitol Police are a patronage force. Things have improved since the days when joining meant knowing the right people. But not by that much. The level of professionalism of the various D.C. forces is fairly low, and the Capitol Police are notorious as the worst of them.

There’s very little oversight of the Capitol Police whose leadership is notorious for ignoring information requests and complaints. The massive force answers to Congress and it acts less like a police force than as bodyguards for a fairly corrupt organization with no accountability.

But that’s what it is.

When the FBI raided Rep. William ‘Cold Cash’ Jefferson’s office, there was outrage and Rep. Nancy Pelosi signed on to a statement demanding that the feds return the papers that they had “unconstitutionally” seized from the corrupt Dem’s office. The issue at stake was the FBI, which answers to the executive, was not supposed to operate on Capitol Hill and on Pelosi’s turf.

“Not anyone here is above the law,” Pelosi argued. But that was exactly the point. Congress had its own private police and the FBI was not supposed to set foot in her domain.

Now, Pelosi is complaining that the executive didn’t dispatch a force quickly enough to her aid.

President Trump, despite false claims by Democrats and the media, did not tell anyone to attack Congress. Like Pelosi and other Democrats, he supported political protests. The violence began while President Trump was giving his speech and had nothing to do with his words.

It was up to Congress and its private police force to secure the premises and stop the violence.

The Capitol Police failed badly where the Secret Service and the Park Police had prevailed against BLM’s attack on the White House. They failed in ways that are baffling and inexcusable.

The most obvious problem is that some Capitol Police appeared to allow many of the protesters inside. Why this happened is a subject of heated debate, but the range of possibilities include an environment where leftist protesters storming and occupying Capitol Hill had been normalized, sympathy by the police, provocation by some higher authority, or miscommunication. All of this reflects badly on Congress and on its private police force.

The Capitol Police had the manpower and the budget to secure Congress. And there’s no excuse why Congress could not and should not have been secured. There was no brilliant strategy here. And the Capitol Police, despite being praised as heroes, behaved ineptly and showed no coherent plan, some trying to deescalate, while others lashed out violently.

These mixed messages may have been due to the Black Lives Matter effect, a successor to the Ferguson Effect, which left many police officers afraid to resist criminals for fear of losing their jobs and even going to jail. When the White House came under attack, Attorney General Barr and national security officials rallied law enforcement personnel to make a strong stand.

When Capitol Hill came under siege, there was no congressional leadership to respond to it. Instead of taking command of the situation, House members panicked, squabbled, and let their private police flail with the situation while they hid away. The sharp contrast between President Trump and Attorney General Barr in Lafayette Square, and members of Congress waiting for their police force to protect them isn’t just ideological. It’s a basic question of crisis leadership.

Democrats and the media falsely claimed that what happened in Lafayette Square was a photo op for which peaceful protesters were gassed, but it’s how you show leadership in a riot.

Congress waited for their private police force to protect them whose members knew that whatever happened, they would be blamed for overreacting or underreacting to the protest by a leadership that doesn’t understand what they do and is sacrificing them to cover its asses.

President Trump, AG Barr, and administration officials gave clear orders to federal law enforcement to stand their ground. Administration officials then protected officers from the fallout as the same Democrats howling for the heads of Capitol rioters were howling for the heads of Secret Service and Park Police leaders who were holding back the hordes of racist BLM rioters.

Capitol Police members had no sense that Pelosi or that members of Congress were behind them. They were operating in a BLMized law enforcement environment in which violent attacks against police and timid responses to them by the authorities had been normalized. They had no clear orders, they were divided by their own political sympathies and by internal politics.

The Capitol riot should have been just another stressful encounter that would have been contained at the expense of injuring some officers and rioters without breaching Congress.

The media has constructed a false narrative in which the White House overreacted to BLM and underreacted to the Capitol riot. But it wasn’t the White House’s job to protect Congress. That’s why Congress has a force of 2,300 people and a $460 million budget with just one job to do.

The question of why it failed at that job ought to be directed to Pelosi and congressional leaders.

The Capitol riot is Pelosi’s disaster and she’s making the most of it by blaming it on everyone else. Her private police force had the resources and the people to keep out the Visigoths, never mind a few hundred people, and instead turned what should have been a riot into a disaster.

Whether that was intentional or not is a question that pits Hanlon’s Razor “never attribute to malice that which is adequately explained by stupidity” against Washington D.C. cynicism.

But there is little question that Speaker Pelosi and the Democrats have massively profited from their mismanagement, initiating proposals to impeach President Trump, expel legislators, purge Republicans from social media platforms, and to cut off corporate donations to them.

While the media propaganda blares non-stop, heads are quietly rolling at the Capitol Police, but don’t expect that to do anything except lower morale and water down the force even further.

Meanwhile the party of police defunding will see to it that the Capitol Police budget tops those of most major cities, that its ranks continue to swell, and that it remains as incompetent as ever.

And then the next disaster in Congress will also be blamed on someone who isn’t in Congress.

Why couldn’t Congress’ private police force of 2,000 protect it from a mob of hundreds? Don’t ask Congress. Just pay the $460 million, cry over the headlines, and keep your mouth shut.