The Burning of the Reichstag (1934) or Rioting in our Capitol – Big Problem: The Democrat Reign of Terror Begins 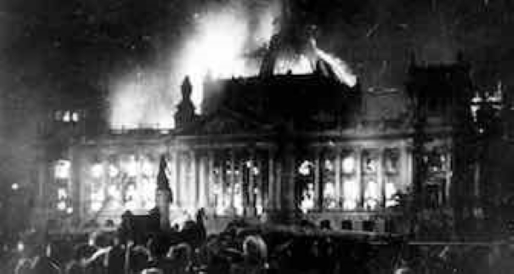 The Burning of the Reichstag (1934) or Rioting in our Capitol – Big Problem: The Democrat Reign of Terror Begins

Mark Twain once said “History doesn’t repeat itself, but it often rhymes.”

The Democrats and the Far Left are using the Reichstag Fire of 1933 as their model to limit or curtail our liberties. They have no intention of creating unity with the Right, only demanding surrender, the end of a two-party system.

In 1933, the Reichstag, home of the German parliament in Berlin, was the subject of an arson attack. A German court found that a Dutch communist was responsible, although it still remains a mystery. Some theorize that Hitler’s Brown Shirts were responsible or at least had a hand in it. In any case, the Nazi Party used the incident as a pretext to claim that communists were plotting against the government and were planning a violent uprising. Hitler urged President von Hindenburg to pursue a ‘ruthless confrontation’ with the Communist Party of Germany. It spelled the end of the Weimar Republic’s democracy and the beginning of Hitler’s National Socialism.

Germany halted freedom of expression, along with freedom of the press, freedom of association and public assembly

Soon after the confrontation began, Germany halted freedom of expression, along with freedom of the press, freedom of association and public assembly. The Nazis used gun ownership records to confiscate guns, but many managed to stash away weapons well into the late 30s.

Our modern tyrants are using the same playbook

They, in fact, did less than nothing. People like Kamala Harris defended the actions of Antifa and BLM, raised money to have these terrorists released from their jail cells. Democrats also released other violent criminals back onto the streets because of COVID, only to commit other violent crimes.

Our modern tyrants are using the same playbook. They find an incident they can use to their advantage, then magnify it, exploit it to the full, and don’t let it go to waste. They get companies like Walmart to withdraw financial support of the GOP. Publishers are canceling book deals of former Trump allies. They’re getting Big Tech to silence their platforms of all conservative debate, and close down competitors, but still allow mullahs to chant ‘death to America.’ The road to full censorship has now been paved.

They propose a no-fly list of enemies and all Trump conservatives they accuse of going against their grain. People are being fired from their jobs because of their political beliefs. Does any of this sound even vaguely historically familiar? If Biden is indeed inaugurated it will get much worse. They have just begun.

One riot vs. the Democrats’ 275 riots

All this rage from the media wasn’t because of the 25 or 30 innocent people killed over the summer in ‘mostly peaceful protests’. They couldn’t care less. It was because some foolish people got carried away, instigated by Antifa, entered the Capitol, the turf of the politicians, let in, mysteriously by the Capitol police, I might add.

One riot vs. the Democrats’ 275 riots. And don’t forget the constant incitement to violence by Democrat politicians and the media these last four years.

Passions are aroused, especially with all the proof of election fraud no one wants to look at. 71% of Trump voters believe a civil war is on the horizon. 40% of Biden supporters agree. What does Pelosi do?…impeaches President Trump without a hearing or allowing a defense…and without a chance of a conviction in the Senate. You can’t find this kind of stupidly just anywhere. You have to go to Washington, D.C.