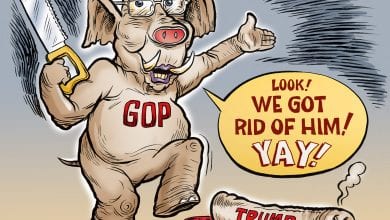 Unlike Trump’s first impeachment in early 2020, several Republicans have signaled that they will support the Democrat-led effort the second time around.

House Speaker Nancy Pelosi introduced the sole article of impeachment on Tuesday accusing President Donald Trump of inciting insurrection. On Jan. 6, a pro-Trump mob clashed with Capitol Police and stormed the Capitol itself, forcing lawmakers into hiding and resulting in the deaths of five people.

Here are the congressional Republicans who either publicly support Trump’s second impeachment or have reportedly considered backing the measure.

New York Rep. John Katko became the first House Republican to say publicly that he would vote to impeach the president, telling Syracuse.com that “to allow the president of the United States to incite this attack without consequence is a direct threat to the future of our democracy.”

“For that reason, I cannot sit by without taking action. I will vote to impeach the president,” he added.

Katko was shortly followed by Illinois Rep. Adam Kinzinger, called for Trump to be removed from office who last week and has long criticized the president and other members of his party who amplified claims of voter fraud.

“There is no doubt in my mind that the President of the United States broke his oath of office and incited this insurrection,” Kinzinger said in a statement Tuesday.

“If these actions — the Article II branch inciting a deadly insurrection against the Article I branch — are not worthy of impeachment, then what is an impeachable offense?” Kinzinger said.

The highest profile House Republican to back the impeachment bid was House Conference Chair Liz Cheney, who has also broken from the president in the past, particularly with regard to foreign policy.

“The President of the United States summoned this mob, assembled the mob, and lit the flame of this attack. Everything that followed was his doing,” Cheney said in a statement.

“None of this would have happened without the President. The President could have immediately and forcefully intervened to stop the violence. He did not. There has never been a greater betrayal by a President of the United States of his office and his oath to the Constitution.”

Cheney, the only member of House Republican leadership so far to back Trump’s second impeachment, was followed by Michigan Rep. Fred Upton and Washington Rep. Jaime Herrera Beutler, both of whom said that they would vote to impeach as well.

“I would have preferred a bipartisan, formal censure rather than a drawn-out impeachment process,” Upton said in a statement on Tuesday. “But it is time to say: enough is enough.”

He was echoed by Beutler, who said that while she understood “the argument that the best course is not to further inflame the country or alienate Republican voters… I see that my own party will be best served when those among us choose truth.”

“I believe President Trump acted against his oath of office, so I will vote to impeach him,” Beutler said.

Michigan Rep. Peter Meijer also said on Tuesday that he was strongly considering impeachment, and multiple reports said that over a dozen House Republicans could ultimately vote in favor of the measure.

Several Republican senators have publicly said that they would consider any articles of impeachment passed by the House, while others, including Senate Majority Leader Mitch McConnell, have reportedly weighed backing the measure as well.

Nebraska Sen. Ben Sasse, who has also emerged as one of Trump’s biggest GOP critics, told “CBS This Morning” on Friday that he would be open to supporting any articles presented after the riot last Wednesday.

“The House, if they come together and have a process, I will definitely consider whatever articles they might move,” he said.

Alaska Sen. Lisa Murkowski has not explicitly said that she would consider articles passed by the House, but called on Trump to resign in an interview with the Anchorage Daily News on Friday.

“I want him to resign. I want him out. He has caused enough damage,” she said.

Pennsylvania Sen. Pat Toomey conceded that he thought Trump “committed impeachable offenses,” but added that he was “not sure it’s desirable to attempt to force him out… a day or two or three prior to the day on which he’s going to be finished anyway.”

Multiple reports said that McConnell was also privately leaning toward convicting the president, though he has not commented publicly.

Though he has stuck with Trump throughout his term, he sharply rebuked congressional Republicans’ effort to overturn President-elect Joe Biden’s victory, and has reportedly not spoken with the president since.