Anti-Commandeering, The Legal Basis for Refusing to Cooperate 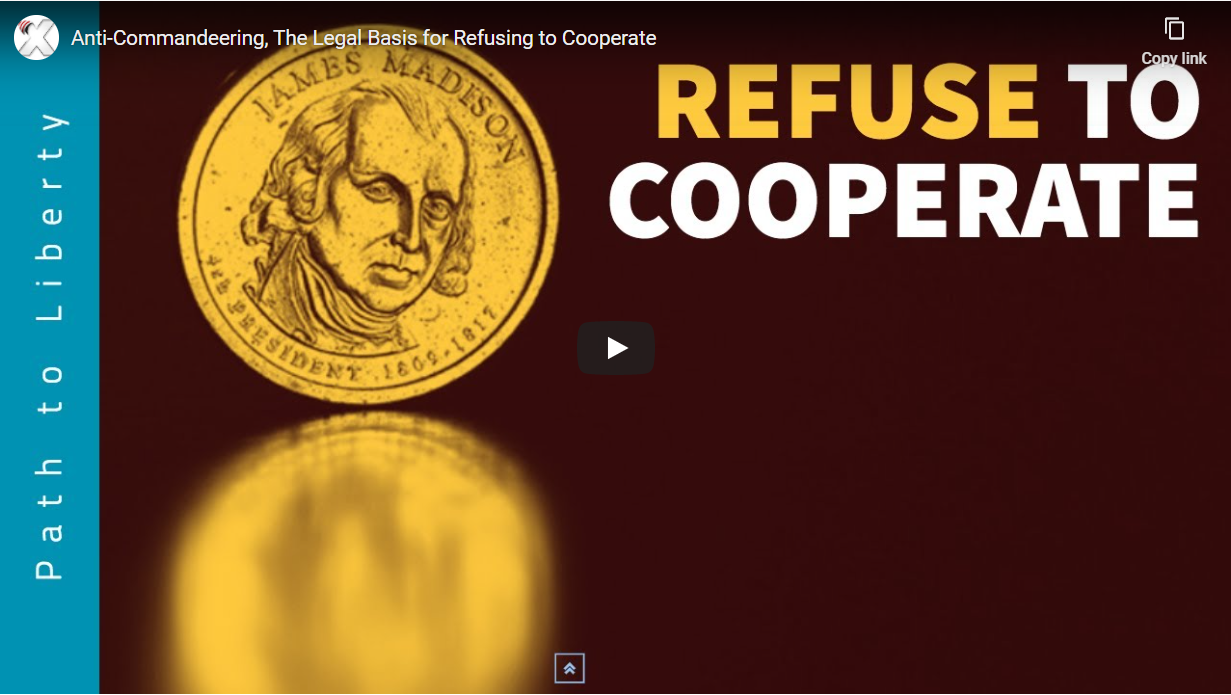 Anti-Commandeering, The Legal Basis for Refusing to Cooperate

The most effective way to nullify federal programs is to use James Madison’s advice, “a refusal to cooperate with officers of the Union.” In legal circles, this is known as the “anti-commandeering doctrine” today – and states have been increasingly using it in recent years.

Question 1: What is Anti-Commandeering?

Anti-commandeering is a longstanding Supreme Court doctrine. In a nutshell, it prohibits the federal government from “commandeering” state personnel or resources for federal purposes.

In effect, the federal government is constitutionally prohibited from requiring states to do anything to enforce federal laws or implement federal acts or regulatory programs.  For instance, the ATF cannot force the sheriff’s office to participate in a federal gun control enforcement effort.

As an aside, there are plenty of federal gun control measures on the books – dating back to 1934. Learn about them here.

Question 2: Where does it come from?

In his blueprint for resisting federal power in Federalist 46, James Madison offered a number of actions, but most significantly, he suggested that a “refusal to cooperate with officers of the union” would be a powerful tool to stop federal overreach.

“Should an unwarrantable measure of the federal government be unpopular in particular States, which would seldom fail to be the case, or even a warrantable measure be so, which may sometimes be the case, the means of opposition to it are powerful and at hand. The disquietude of the people; their repugnance and, perhaps refusal to cooperate with officers of the Union, the frowns of the executive magistracy of the State; the embarrassment created by legislative devices, which would often be added on such occasions, would oppose, in any State, very serious impediments; and were the sentiments of several adjoining States happen to be in Union, would present obstructions which the federal government would hardly be willing to encounter.” [Emphasis added]

Question 3: Does this actually work?

Yes. Absolutely. In fact, we consider this approach the most effective way to reject, resist and nullify federal acts.

James Madison, the “Father of the Constitution,” included this as part of his 4-step strategy too – which you can learn about in more detail here.

Surprisingly, even Alexander Hamiltlon stumbled upon this strategy while arguing in favor of more central power. Writing in Federalist 16 – what Mike Maharrey calls “the seeds of nullification”

If the interposition of the State legislatures be necessary to give effect to a measure of the Union, they have only NOT TO ACT, or to ACT EVASIVELY, and the measure is defeated

But it’s not just theory – we’ve been rolling up our sleeves every single day for years to put these principles into practice. You can see the results so far in our annual State of the Nullification Movement Report: https://tenthamendmentcenter.com/report/

Question 4: Isn’t determining constitutionality the job of the supreme court?

The short answer is it doesn’t matter. Constitutionality isn’t part of the equation. The anti-commandeering doctrine doesn’t depend on a finding of constitutionality. States can refuse to provide personnel or resources for any federal activity regardless of its constitutionality. The utilization of state resources, funds and personnel are totally at the discretion of the state government.

In Murphy v. NCAA (2018), the Supreme Court again reaffirmed this Madisonian principle and held that Congress can’t take any action that “dictates what a state legislature may and may not do” even when the state action conflicts with federal law. Samuel Alito wrote, “a more direct affront to state sovereignty is not easy to imagine.”

Question 5: What are the supreme court cases?

The anti-commandeering doctrine rests on five landmark cases, the first dating back to 1842.

The fundamental principle applicable to all cases of this sort, would seem to be, that where the end is required, the means are given; and where the duty is enjoined, the ability to perform it is contemplated to exist on the part of the functionaries to whom it is entrusted. The clause is found in the national Constitution, and not in that of any state. It does not point out any state functionaries, or any state action to carry its provisions into effect. The states cannot, therefore, be compelled to enforce them; and it might well be deemed an unconstitutional exercise of the power of interpretation, to insist that the states are bound to provide means to carry into effect the duties of the national government, nowhere delegated or instrusted to them by the Constitution

Want to learn about all five cases in more detail? Check out this podcast – Anti-Commandeering, The Legal Basis for Refusing to Cooperate

The federal government can withhold funding related to any action that a state refuses to take, but with some significant limitations and caveats. For instance, if the state refuses to enforce federal marijuana laws, the federal government can possibly cut some funding relating to drug enforcement. But it cannot cut unrelated funding to punish the state. In other words, Congress couldn’t cut education funding to punish a state for not cooperating with marijuana prohibition.

Learn more about what they consider encouragement vs what is considered coercion here.

Citing court cases is not our normal approach. But when they get it right for more than 150 years in a row – which isn’t very often – it makes our job a little less difficult.

But should the federal courts decide to change course on this in the future – we’ll still need to hold the line and do what’s right – whether they agree with us or not.

At the end of the day, it’s up to “We the People” to learn how to exercise our rights whether they the government want us to or not.

I hope you find this interesting and educational – as we push forward into 2021, we’re rolling up our sleeves every single day to take a stand for the Constitution and liberty against the largest and most powerful government in the history of the world.

Getting the job done won’t be easy, but no matter what the odds, it’s essential to do what’s right. And for us at the TAC, that’s the Constitution: Every issue, every time. No exceptions, no excuses.

Together with your help, we’ll continue setting the foundation for liberty now and in the years to come. Thank you for being here with us! 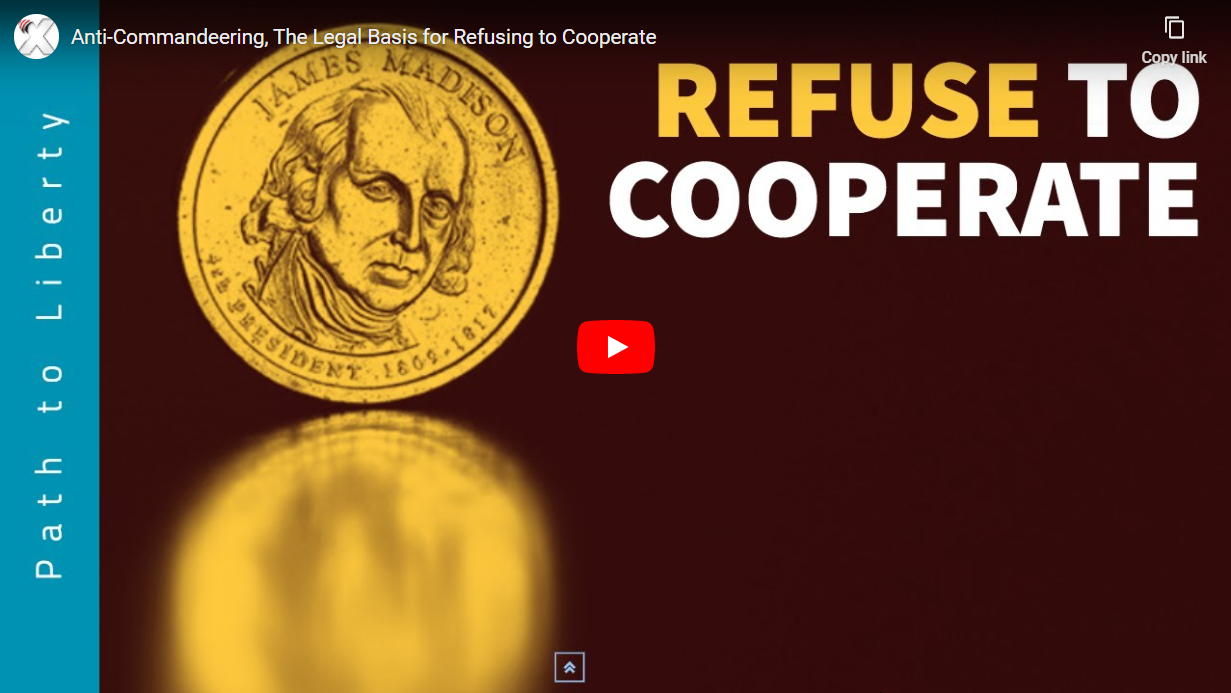