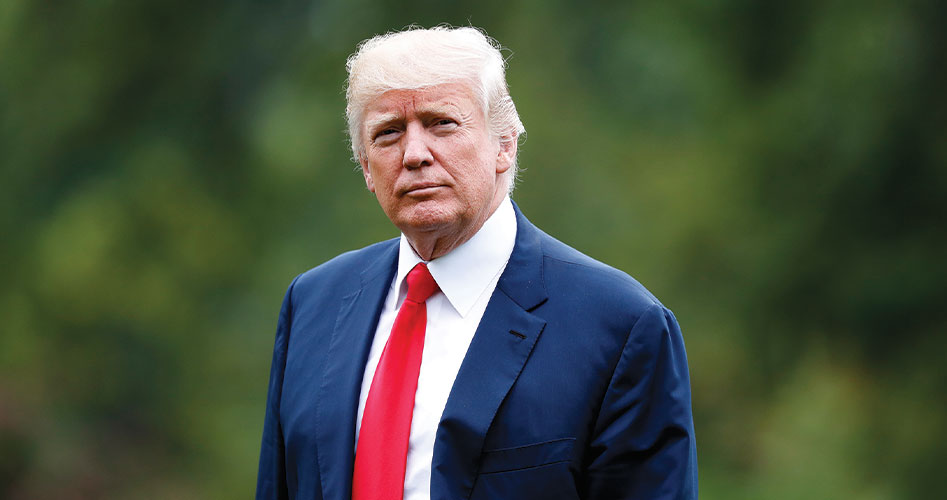 Though President Donald Trump has some significant flaws — in policy and personality — he has accomplished more than any president in recent decades.

From the perspective of those of us who favor a limited constitutional government, President Donald Trump’s four years in office were not perfect. But to paraphrase Alexander Hamilton’s opinion about the Electoral College, Trump’s policies may not have been perfect — but they were excellent.

Before the Chinese-based COVID-19 virus arrived in the United States, Trump was headed for a solid reelection. The economy was booming, as entrepreneurs, left to themselves and not fearing extra burdens placed upon them by an overbearing federal bureaucracy, were driving an American economy that set all types of records.

Since Trump’s election in 2016, the economy had created four million new jobs, 400,000 of these in manufacturing, which grew at the fastest rate seen in decades. Unemployment claims were the lowest they had been in a half-century. And the wages that Americans received were buying more as median household income exceeded all previous records.

The economic surge benefited those considered at the lower end of the economic spectrum, as blacks and Hispanics had the lowest unemployment rates ever seen. Americans without a high-school diploma enjoyed their lowest-ever rate of unemployment. As Eric Morath and Jeffrey Sparshott wrote in the Wall Street Journal, “Wages for low-skilled workers have accelerated since early 2018.”

Small businesses enjoyed the lowest top marginal tax rate seen in more than 80 years. Certainly, the cut in income tax rates helped, but just leaving the economy alone and allowing the free enterprise system to do its work was even more important. Trump made a conscious effort to relieve the burden on the backs of American business.

During Trump’s tenure, eight and one-half regulations were eliminated for every new rule promulgated, which — highly unusual for political promises — far exceeded the campaign pledge to cut two government regulations for every one new regulation. According to a report by the libertarian think tank Cato Institute, these efforts “slashed regulatory costs by nearly $50 billion, with savings reaching $220 billion once major actions are fully implemented.”

This means a savings for the average American household of more than $3,000 per year.

Under Trump’s leadership, Congress repealed the penalty for violating the individual mandate in the Affordable Care Act. Congress also authorized oil and gas drilling in the Arctic National Wildlife Refuge on Alaska’s North Slope (which would have gone nowhere had Trump not been willing to sign such legislation). Trump directly took on the radical environmentalists with his support of fracking, which has made the United States not only energy independent, but a net exporter of cheap natural gas for the first time since the 1950s.

Not buying into the myths of the climate-change activists (that unless the world’s economy and our standard of living are severely curtailed, human-caused global warming is going to cause severe damage to the climate), Trump pulled America out of the Paris Climate Accord. According to National Economic Research Associates, had the United States complied with its heavy-handed restrictions, it would have cost the country 2.7 million lost jobs by 2025, including more than 400,000 manufacturing jobs.

Beyond the horrific economic implications of compliance, the Paris deal posed a serious threat to American national sovereignty. Trump, far more than any recent president, cared about preventing the United States from being swallowed up in some globalistic New World Order. While Trump did not go as far in the area of nonintervention as many of us would have liked, no longer did we hear anything such as the globaloney voiced by President George W. Bush in his second inaugural address (in which he called for a global crusade to “end tyranny in our world”).

While an actual exit from NATO, a deal that obligates the United States to go to war if any one of its member nations is attacked, would have been best, at least Trump called for the compact’s mostly European countries to provide more financial support to the pact. No phrase angers globalists more than Trump’s often-enunciated “America First.” This reluctance to intervene in foreign nations’ internal affairs and wars earned Trump the undying hatred of the neoconservatives, the Never Trumpers, the American intelligence community, and all of those who favor reducing American national sovereignty in favor of some sort of world government.

One reason that Trump’s support for stronger controls of immigration elicited such a strong response was that open borders are an integral part of the push for world government. Yet, Trump’s dogged pursuit of tightened borders has shifted the debate so much that, generally speaking, neither the Democrats nor their allies in the mainstream media dared to raise this as an issue during the 2020 campaign.

Contradiction: Despite the prediction that President Trump’s strong immigration policies would cost him votes from American Hispanics, the truth is that both Trump and other Republican candidates increased their share of support in that community. Trump also had the largest percentage of black voters than any Republican presidential candidate in the past 60 years. (Photo credit: AP Images)

Neither was abortion a major issue in the campaign, although Trump’s actual policies made him perhaps the strongest pro-life president in U.S. history. While Ronald Reagan wrote a book (Abortion and the Conscience of a Nation) promoting the cause of the unborn, Trump took every opportunity to promote the cause with policy. Trump barred federal planning dollars from going to any organization that provides abortions or refers patients to abortion clinics. He not only reinstated the Mexico City Policy (which prevents any U.S. government global health funds from going to foreign groups that provide abortion), he expanded it.

Despite his insistence that American foreign policy be guided by the concept that it should put America first, Trump did engage with other nations. Largely because of the efforts of the Trump administration, Israel and four Arab nations have agreed to treaties that greatly reduce the prospect of wars in the Middle East.

Trump had the misfortune of being president when the COVID-19 virus, which originated in Communist China, was introduced into the United States. While castigated for months as cases and deaths mounted, Trump did about all that a president could be expected to do in such a situation. Even Dr. Anthony Fauci — hardly a strong public backer of Trump — admitted that Trump’s swift action in banning travel from China probably saved thousands of American lives.

While future presidents may not pursue his positive steps with the economy, energy, and opposition to globalism, Trump has left a lasting legacy in the federal court system. In addition to adding three new members to the U.S. Supreme Court, one-fourth of all federal judges were selected by him. Considering, for example, that Justice Clarence Thomas has been on the Supreme Court since 1991, Trump’s impact on the federal judiciary will be felt for years to come.

Trump also grew the Republican Party, receiving the highest percentage of votes from African-Americans that any Republican has received since 1960. Working-class Americans of all races and religions flocked to Trump. A majority of Roman Catholics abandoned their traditional support of the Democratic Party to support him. He also increased the percentage of support from Hispanics. Whether other Republicans can build on that increase will largely depend on whether they adopt many of the policies that Trump championed.