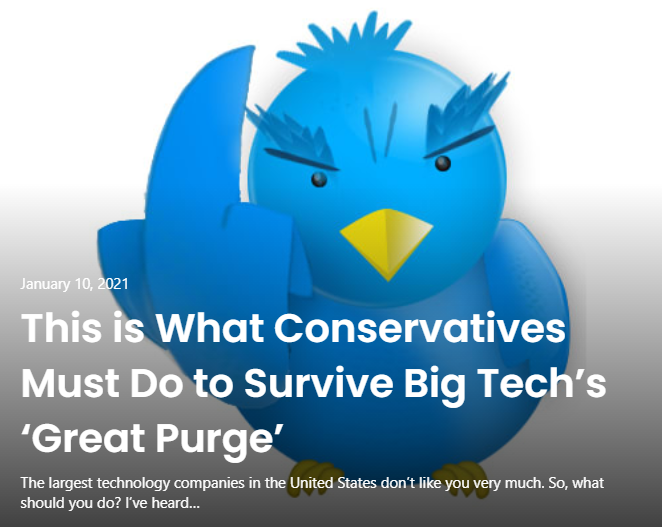 The largest technology companies in the United States don’t like you very much. So, what should you do?

I’ve heard from a ton of people that believe their fate is sealed. Conservatives will have their voices silenced just like the dissenters in Taiwan.

Strategy to Survive “The Purge”

Start by recognizing that you can’t fix the tech platforms that are bent on eradicating your point-of-view. You’ll have to go elsewhere or be exiled. So consider alternative social media platforms like Parler, Gab, Rumble, etc.

These social media sites focus on freedom of speech.

Google kicked Parler off it’s app store because it disagreed with posts that users published. Weak, lame, silly, petty. Yeah, but it is what it is. You can’t fix Google, so avoid it.

DuckDuckGo is a fantastic search engine, they don’t track you, don’t sell your data and do not have the algorithmic political bias that Google does. Go HERE to see how to change the search engine you use from Google to ANYTHING else.

Apple and Google kicked free speech company Parler off of its app store. If you have an iPhone or a Pixel, you’re financially supporting their actions.

While Samsung still uses Google’s Android OS, picking a phone not made by Apple or Google nets the monopolistic demons much less revenue than buying their phones.

You could also “de-Google” your Android phone to completely release you from Big Tech’s grasp:

The ultimate idea is to make sure you aren’t stuck on a single platform, with a single provider, on a single device. You must decentralize your communications so that you can get the information you need.