The “Others Unknown” In The U.S. Capitol 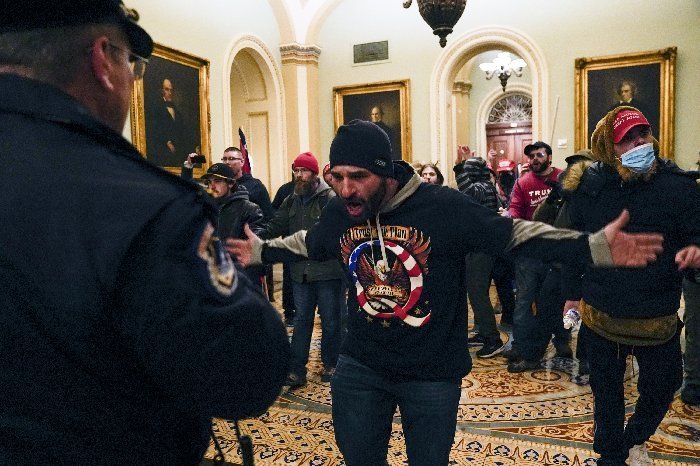 The “Others Unknown” In The U.S. Capitol

Democrat Terry McAuliffe, running again for Virginia governor, is raising money by referring to the “deadly terrorists who stormed the U.S. Capitol” in an “attempt to overthrow our democratically elected government.” One of those so-called “deadly terrorists,” a U.S. military veteran, was murdered by a police officer. She was unarmed. Actual terrorists, by the names of Bill Ayers and Bernardine Dohrn, raised money for Barack Hussein Obama when he ran for president. McAuliffe was silent about that and backed Obama.

Before we get to the critically important issue of “others unknown” in the events in the Capitol, consider the common lie that Obama backers Ayers and Dohrn and other members of the Weather Underground bombed property, not people, in order to protest the Vietnam War. That’s how the media excused their violence. But that’s actually two lies in one. First, they specialized in anti-personnel bombs using heavy metal staples. Second, Ayers and Dohrn were not opposed to the war, only to a U.S. victory.

During the 2008 presidential campaign, when Obama tried to distance himself (with help from the media) from Ayers and Dohrn, who had sponsored his political career, we told the truth in a series of press conferences. Larry Grathwohl, an FBI informant in the Weather Underground, had testified that Ayers told him personally that fellow Weather Underground member and future wife Bernadine Dohrn set the bomb that killed San Francisco Park Police Sergeant Brian McDonnell in 1970.

In terms of what happened on Wednesday, a pro-Trump activist on the scene of the Save America rally reported, “All the protestors I saw were very peaceful. The Capitol police let them in and even escorted some through the building. I know something got out of hand, but I do feel like there were agitators in the crowd that were Antifa. They were heavy in the streets the night prior.”

Based on what she and others say, it is apparent that some peaceful Trump supporters were allowed into the Capitol and were then caught up in the violence instigated by others unknown.

Video of the protesters showed some of them in genuine amazement over being allowed into the Capitol. Hence, stories about a so-called “breach” of the Capitol by protesters is very misleading.

Columnist J.C. Hawkins believes the “invasion and disruption in the Capitol was pre-planned” by elements of the Deep State with the following three objectives in mind:

“It succeeded on all three levels, just as planned,” he notes. “It was able to happen with the cooperation of the Capitol Police, who in some circumstances permitted and facilitated access into the building by moving barricades and directing the protestors inside the building.  Those actions have been filmed on phones and released on the Internet.”

What is clear is that Trump did not encourage violence. Trump actually said to the Save America rally that, “We have come to demand that Congress do the right thing and only count the electors who have been lawfully slated, lawfully slated. I know that everyone here will soon be marching over to the Capitol building to peacefully and patriotically make your voices heard. Today we will see whether Republicans stand strong for integrity of our elections, but whether or not they stand strong for our country, our country. Our country has been under siege for a long time, far longer than this four-year period.”

A so-called “conservative,” with big backing from various “conservative” foundations, denounced President Trump, saying that he “incited” the “thugs” trying to “disrupt the peaceful transfer of power…”

In a press release, Jeanne Allen, CEO and founder of the Center for Education Reform, said, “He has failed in every respect to govern this nation in its most trying times. He nearly toppled the checks and balances that are the hallmark of the United States; he has seeded distrust in the workings of this the best nation on earth. This is a terrible lesson for our children.”

She ignores the evidence of election fraud that drew hundreds of thousands of people to Washington, D.C.

You can find a list of her supporters here.

The rush to frame Trump for the violence ignores the role of the Capitol police in letting people inside the building and then overreacting when things got out of hand by shooting a U.S. military veteran.

Hawkins adds, “What remains at issue is what possessed police to shoot an unarmed woman inside the Capitol.  She turned out to be an Air Force veteran and staunch Trump supporter named Ashli Babbitt.  The major media have shown absolutely no curiosity or outrage over who shot her and why. Maybe if she had been an armed minority drug dealer they would be all up in arms.”

It’s absolutely necessary to identify the “others unknown.” This was a set-up.