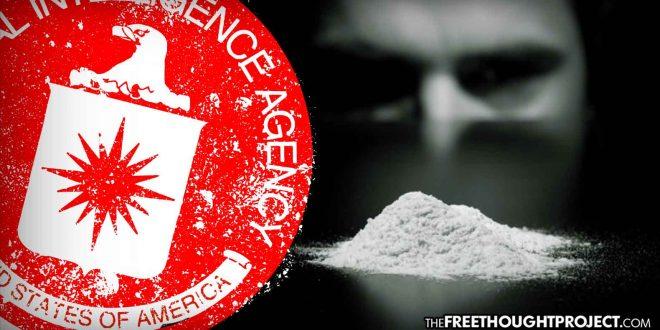 Richard Nixon, in his effort to silence black people and antiwar activists, brought the War on Drugs into full force in 1973. He then signed Reorganization Plan No. 2, which established the Drug Enforcement Administration (DEA). Over the course of five decades, this senseless war has waged on. At a cost of over $1 trillion — ruining and ending countless lives in the process — America’s drug war has created a drug problem that is worse now than ever before.

This is no coincidence.

For years, those of us who’ve been paying attention have seen who profits from this inhumane war — the police state and cartels.

This horrendously corrupt and violent drug war has gotten so bad, that it is getting pushed into the mainstream. In a Netflix Documentary that will be released this month, Stanley Nelson explores how the mainstream media and the CIA worked together to push crack in black neighborhoods across the country, creating a hellish prison state.

Promising to be one of the most explosive documentaries in recent history, the show touches on the CIA’s connection to the crack epidemic. According to an article from the Daily Beast who screened the documentary before its release on January 11, the documentary’s broad scope ties racial and economic disparities; inner city poverty and crime; media reporting and sensationalism; political and legislative campaigning and action; mass incarceration and exploitation; and personal and communal responsibility together to paint a devastating picture of the American drug conspiracy.

Cops’ disinterest in combating crack’s infiltration into Black American communities gets brief mention, as does the police’s corrupt participation in the drug economy, be it by stealing or taking payoffs from dealers. No in-depth investigation into this is forthcoming, alas; it’s merely another of the doc’s many bullet points to be dealt with in fleeting fashion. That’s also true of the long-standing theory—first popularized by a 1996 San Jose Mercury News series of articles—that the CIA was either tacitly or actively responsible for the 1980s influx of cocaine and crack into the American inner city, through its efforts to help fund Nicaragua’s Contras in their war against the Sandinista government. A quick history lesson about the Iran-Contra scandal, married to clips of a 1996 Watts, California town hall meeting in which Black American citizens railed against then-CIA chief John M. Deutch, suggests—along with National Security Archives senior analyst Peter Kornbluh’s bold interview claims—that the U.S. government is chiefly to blame for crack’s ubiquity.

If the CIA trafficking cocaine into the United States sounds like some tin foil conspiracy theory, think again. Their role in the drug trade was exposed in 1996 in a critical investigative series “Dark Alliance” by Gary Webb for the San Jose Mercury News. The investigation, headed up by Webb revealed ties between the CIA, Nicaraguan contras and the crack cocaine trade ravaging African-American communities.

The investigation provoked massive protests and congressional hearings, as well as overt backlash from the mainstream media to discredit Webb’s reporting. However, decades later, officials would come forward to back Webb’s original investigation up.

Then-senator John Kerry even released a detailed report claiming that not only was there “considerable evidence” linking the Contra effort to trafficking of drugs and weapons — but that the U.S. government knew about it.

In the book, “Pablo Escobar In Fraganti,” Escobar, who lives under the pseudonym, Juan Sebastián Marroquín, explains his “father worked for the CIA selling cocaine to finance the fight against Communism in Central America.”

Going even further down the rabbit hole, a History Channel series also addressed how US involvement in Afghanistan turned the country into a virtual heroin factory and how the drug war empowers cartels.

The final chapter of the series examines how the attacks on September 11thintertwined the War on Drugs and the War on Terror, transforming Afghanistan into a narco-state teeming with corruption. It also explores how American intervention in Mexico helped give rise to El Chapo and the Super Cartels, bringing unprecedented levels of violence and sending even more drugs across America’s borders.

The reason why the drug war actually creates a drug and violence problem is simple. And those who profit most from the drug war — drug war enforcers and cartels — all know it. When the government makes certain substances illegal, it does not remove the demand. Instead, the state creates crime by pushing the sale and control of these substances into the illegal black markets. All the while, demand remains constant.

This is why the Free Thought Project and other open-minded groups all advocate bringing this bloody and criminally ineffective drug war to a sudden and grinding halt.

Hopefully, this new documentary will push others to question drug laws. Hopefully, the documentary wakes people up to the idea that legality does not equal morality and that government force, via kidnapping, caging, and killing, is no way to solve an addiction problem. Hopefully.

Matt Agorist is an honorably discharged veteran of the USMC and former intelligence operator directly tasked by the NSA. This prior experience gives him unique insight into the world of government corruption and the American police state. Agorist has been an independent journalist for over a decade and has been featured on mainstream networks around the world. Agorist is also the Editor at Large at the Free Thought Project.