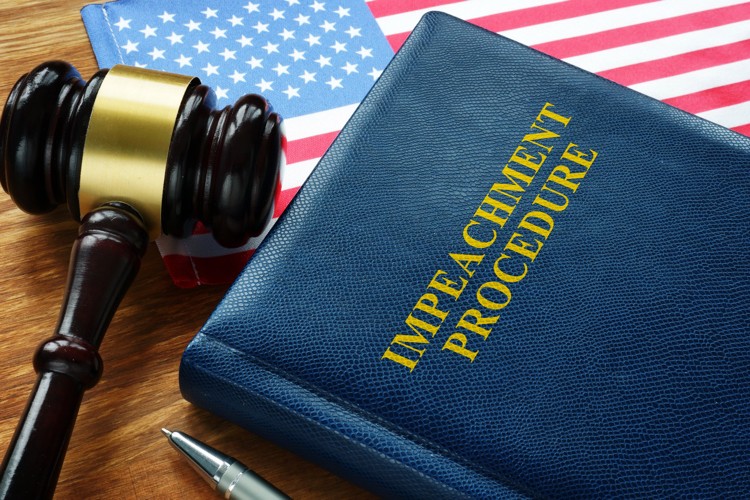 Newly-sworn Representative Cori Bush of Missouri beclowned herself yesterday in what was, apparently, her very first official act as an elected representative after taking the oath of office. Her first resolution calls for the expulsion of colleagues who challenged certification of the electoral college vote for “President-elect” Biden.

Meanwhile, Representative lhan Omar of Minnesota continued beclowning herself by tweeting the articles of impeachment she introduced against President Trump.

Both congressladies think their measures are an appropriate response to the surge of mostly peaceful protesters who stormed the U.S. Capitol yesterday.

Bush likely doesn’t know it, but a congressman cannot be expelled for doing what congressmen often do. Nor does Omar apparently understand that with 13 days left before Biden takes office, impeachment is most unlikely.

At Twitter, Bush bills herself as a “nurse, activist, organizer, single mom, & pastor.” And, she tells her followers, she is “leading with radical love, fighting for regular people.”

Those credentials might be one reason she doesn’t understand that congressmen routinely object to certifying an election, as leftist Democrats did in 2005 and 2016.

Be that as it may, Bush — no relation President George W. Bush — sallied forth with this tweet: 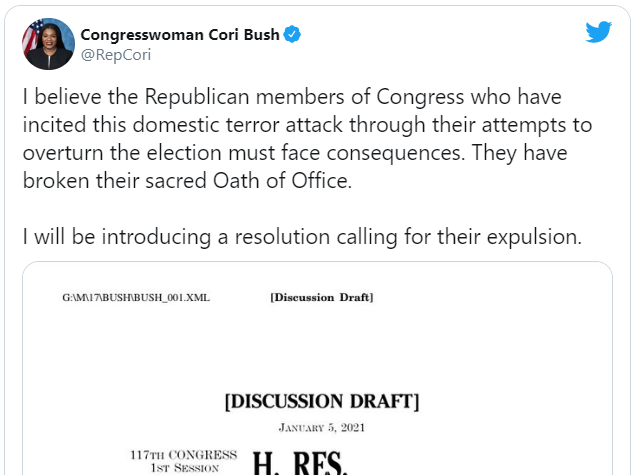 Oddly, the resolution says nothing about congressmen who “incited this domestic terror attack,” although its language borders on the preposterous:

Why Bush conflates those congressmen who challenged the electoral vote with yesterday’s mostly peaceful protesters is a mystery. After all, the resolution is dated January 5, the day before the so-called domestic terror attack.

Bush’s colleague from Minnesota wants the House and Senate to take another tilt at the impeachment windmill again.

“I am drawing up Articles of Impeachment,” she tweeted yesterday: 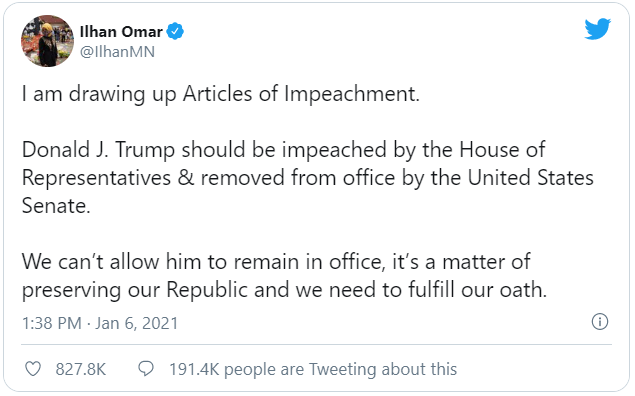 Today, she introduced them. “We need to move quickly to remove this President from office,” she wrote. 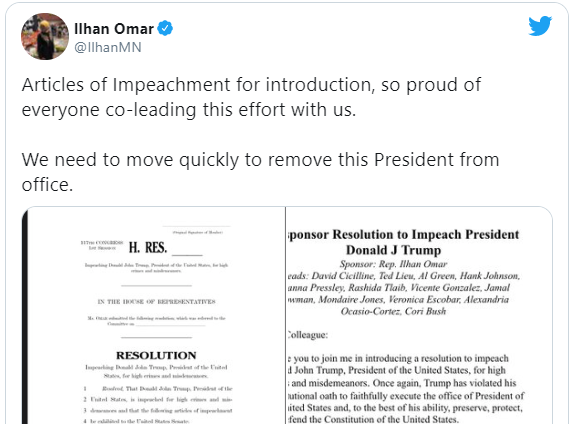 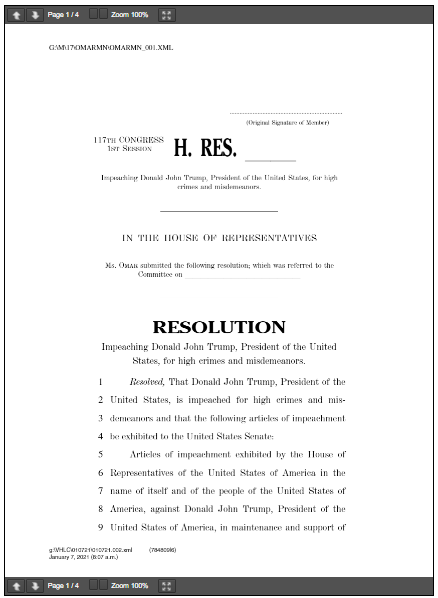 Shockingly, Representative Alexandria Ocasio-Cortez, another of Congress’ young-yet-bright constitutional scholars, thinks Trump’s cabinet should invoke the 25th Amendment and that Congress should impeach him.

“Our republic is in great danger, and it is imperiled further without swift action to protect it,” the brainiac tweeted:

The President incited an attack on Congress. He is deeply unstable. The Cabinet must invoke the 25th amendment.

Congress must also pursue impeachment and removal of the President.

Joining this ridiculous crusade — again, just 13 days before Trump leaves office — are socialists such as Bush, Ayanna Pressley, Rashida Tlaib, and others.

Omar’s accusing someone of bad behavior is particularly rich.

Lifted from African squalor by American taxpayers, the radical refugee is credibly accused of marrying her brother to commit immigration and student-loan fraud.

As well, she’s a home-wrecker who shacked up with a Democrat political consultant after kicking over his marriage, and she sent millions in campaign “consulting fees” to his consultancy. That, of course, is a form of self-dealing.

She has also landed in hot water for campaign-finance high jinx. State officials fined her for misspending campaign funds, while the Federal Election Commission has been sniffing around her campaign accounts as well.

At the time, Minneapolis police announced they were investigating the claim. “The MPD is aware of the allegations of vote harvesting,” the department tweeted. “We are in the process of looking into the validity of those statements. No further information is available at this time on this.”

The congressladies were unconcerned when “most peaceful protesters” left Washington, D.C., in flames in late May.

Indeed, Bush seemed to encourage the possibly fatal arson and violence on Twitter. She sent a mixed message to so-called protesters as well, describing herself as non-violent, but not peaceful.

R. Cort Kirkwood is a long-time contributor to The New American and a former newspaper editor.