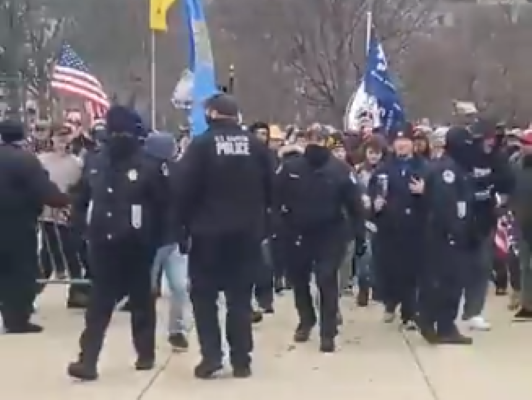 Yesterday, Rep. Mo Brooks (R-AL) implored Americans to not fall for the mainstream media’s bait and rush to judgment about the events that transpired yesterday in D.C. He also warned that Antifa would be posing as Trump supporters as part of an “orchestrated Capitol attack.” 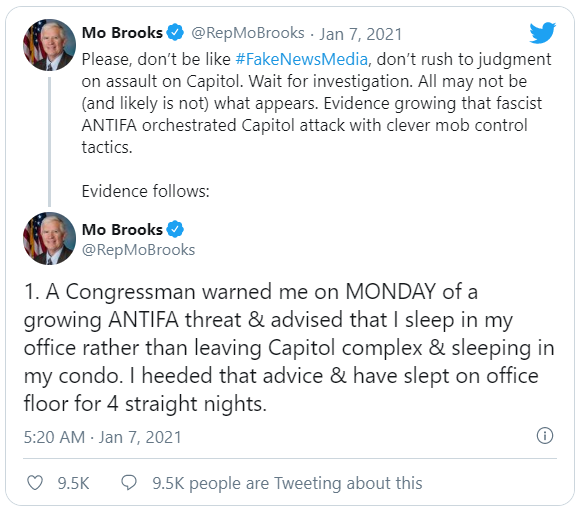 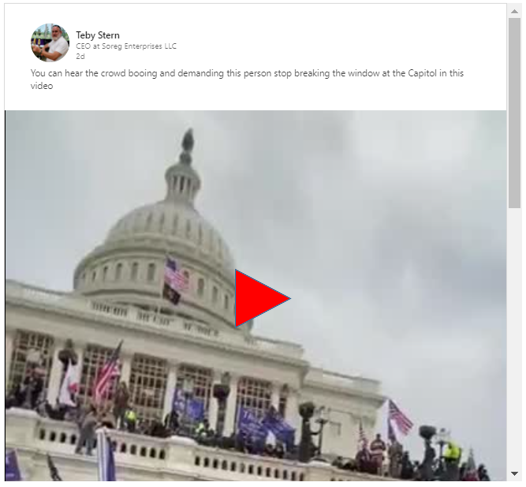 Who were these people, all dressed in black that were breaking the Capitol windows as Trump supporters demanded they stop? Does the mainstream media have any curiosity at all about what really happened that day, or is it enough that President Trump is blamed for it and that the voter fraud issues in several states have all disappeared?

In a tweet, journalist Paul Sperry reported intel he received from a former FBI agent on the ground at the Capitol who told him that a busload of Antifa thugs had been dropped off at the rally.

The video below Sperry’s tweet, shared by “Sage + Honey,” could be very useful to anyone who truly cares about what happened in the Capitol building that day.

We have broken down the incredible video that looks more like a bad B-movie into 8 segments:

In the video, a VERY GOOD videographer is coming down the stairs of the Capitol building.

#1. The camera zooms in on a police baton lying on the ground in the lobby.

#2. The camera then moves to a single police officer who is standing in a doorway. Standing in front of the police officer is a male dressed in a black t-shirt, black pants, and a black hat. His t-shirt has some sort of message or logo, but it’s unclear what it says. One thing is clear; he is not wearing any Trump gear. The male who appears to be leading a group of protesters attempting to infiltrate the Capitol building is either the most lethargic patriot to ever exist, or he’s simply a very bad actor. He’s not at all aggressive like one would expect from someone who just broke into the Capitol building determined to save America from a group of anti-American lawmakers hell-bent on stealing the election from President Trump. Nope, not this guy; he’s very relaxed and, at most, does a lot of shaking his head as the cop tells him to “stand back!”

#3. The police officer is shouting at the group from the doorway, and then suddenly, like in an awful movie, he realizes his baton is on the floor and reaches over to pick it up from the ground. Of course, by this time, it’s too late; the lethargic patriot and his posse have entered the lobby. Instead of calling for backup, the police officer decided to run up the stairs. 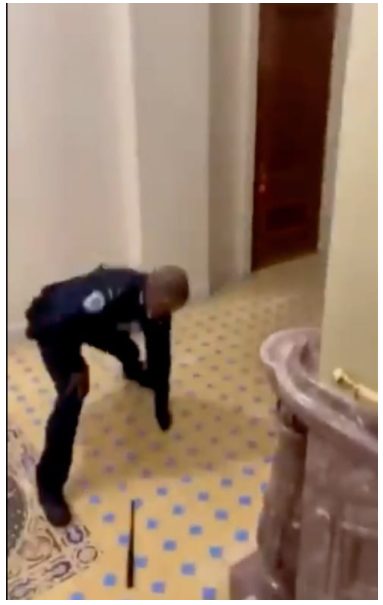 #4. The group’s lethargic leader dressed all in black follows the police officer up the first flight of stairs. Anyone who’s ever been in the Capitol building knows how confusing it is to navigate, so, fortunately, for the lethargic patriot, he’s got a pretty good tour guide.

#5. The police officer stops at the top of the first flight of stairs, warns the crowd led by the lethargic leader, and repeats his halfhearted warning to “back it up,” as he lifts his baton twice to let them know he means business.

It should be noted at this point that the cameraperson filming the entire event appears to know exactly where the police officer will lead the “violent mob of Trump supporters” in advance. As I mentioned earlier, the Capitol building is difficult to navigate. The cameraperson, however, seems to know exactly where the cop will go next. Instead of leading them to a dead-end down a hallway where they can be easily captured, he leads them directly to the Senate Chambers rotunda.

#6. The police officer only pauses briefly at the top of the stairs before he begins to run up another set of stairs. As he’s running, he can be seen shouting into his radio, “Second floor!” (which is where the entrance to the Senate Chambers is located). He hasn’t lead the “violent protesters” to the second floor quite yet; he’s just letting them know he’s almost there. 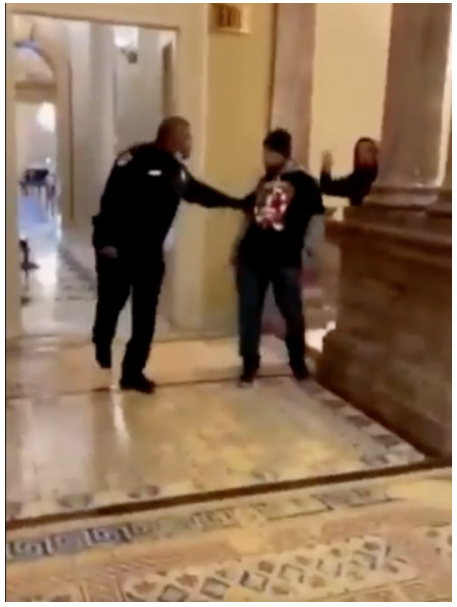 #8. Like a good tour guide, the police officer leads the group into the Senate Chambers’ rotunda, where 3 more cops are waiting for their arrival. “They here!” the police officer announces, as the 3 police officers slowly approach them, telling them to “Leave now!” Instead of following their orders, the group tells them, “No,” adding, “This is our America.”

Thankfully, the cameraperson knew exactly where the police officer would go and, while running backward, knew exactly where to stop to capture the exchange between the police officer and the “violent mob of Trump supporters.” The cameraman was so good at his or her job, that much like the police officer, he or she was able to help the “violent mob” reach the exact location the media warned about—the Senate Chambers where the evidence of voter fraud was about to be presented and several brave lawmakers were about to stand up to the theft of our elections.

We’re not conspiracy theorists, and we’ve never believed all of the videos about actors involved in 9-11 or mass shootings in schools. Still, this video needs to be seriously looked at by anyone who cares that this event took the world’s eyes off the voter fraud evidence that Trump promised would be revealed in the Joint Session of Congress. 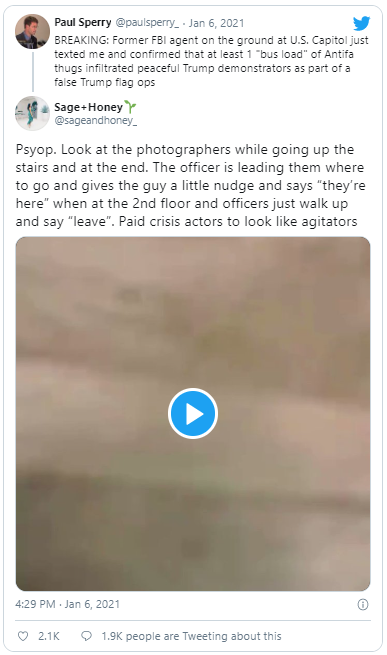 These “radical” protesters who entered the Capitol by force never harmed a single innocent person inside. Every video and every first-hand account of the people who got inside revealed no evidence of violence or even direct threats. So, why are Trump’s cabinet members, like Mitch McConnell’s wife, Elaine Chau, leaving his administration? Why are Democrats trying to impeach Trump or use the 25th Amendment to remove him from office? Could it be that they fear he will run again in 2024? 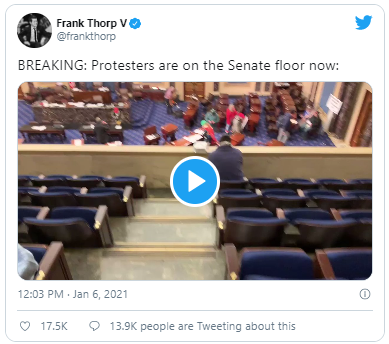 And finally, in yet, another incredible and unexplainable clip, massive groups of people who have broken through the fencing appear to be waved into the secure area at the front steps of the Capitol building by a police officer. We cannot confirm or deny that the police officer was directing people to the front steps, but it sure looks like what he’s doing.

You be the judge: 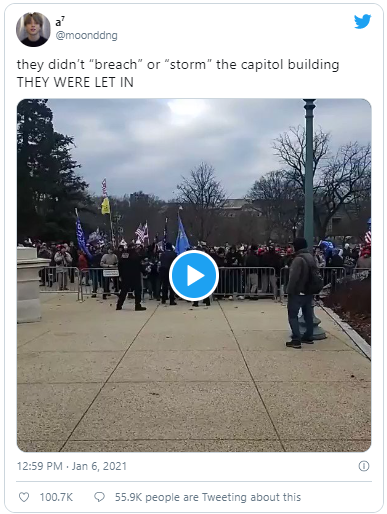 It should also be noted here that the first person to be positively ID’d as being inside the Capitol building, is Antifa/BLM activist John Sullivan who called for an armed revolution on Instagram. He is also a leader of a radical group Insurgence USA .

Here’s a video from Insurgence USA that talks about how “It’s up to us to prevent a second Trump term.”

Imagine how different our would be if we had a media that actually cared about reporting the truth!