Vice President Pence Can Stop The Steal And Keep The Peace 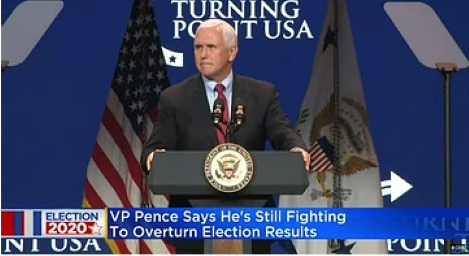 Vice President Pence Can Stop The Steal And Keep The Peace

“All that is necessary for the triumph of evil is that good men do nothing.” (Edmund Burke)

I suspect Vice President Mike Pence has quoted that many times. January 6 might be his opportunity to live out his day to be the good man who stopped evil.

About half of our nation understands that Trump’s outperforming any prior president, his state and county victories that are historically indicative of a national victory and outperforming any Republican candidate among minorities since the 1960s make it a statistical impossibility that Joe Biden could have won. At least same are quite aware of the numerous credible allegations of massive fraud, the first in our nation’s history of vote counting coming to a stop in what appears to be coordinated across the battleground states, followed by statistically impossible vote hikes in Democrat controlled cities. Even being confident of that, many have abandoned the battle. Perhaps they see avoiding conflict as a path to peace, but the reality is there is no peace through an illegitimate election. And as I wrote here, Joe Biden created a situation where he has no path to a legitimate victory.

Allowing the election to be stolen would rip our nation apart. We must work this out now. While the genius of our Constitution provides numerous mechanisms to do that, most people in such roles have looked the other way and failed their constitutional duty. They are either crooks or cowards. We may indeed be down to the last one, which is the role of the Vice President as the presiding officer over the Electoral College vote count on January 6.

The U.S. Constitution states, “The President of the Senate shall, in the Presence of the Senate and House of Representatives, open all the Certificates, and the Votes shall then be counted.” Nowhere in that language is counting the votes delegated to anyone and it would take a constitutional amendment, not simply statutory language, to accomplish that. History shows that the count being determined by the President of the Senate was well understood, even in potentially controversial situations in 1796 and 1800 and it has served our nation well as this 2004 article (linked below) points out, while trying to make the case for a change.

There is no person who does not have a bias, but while both John Adams and Thomas Jefferson had the most to gain in their respective situations, they also had the most to lose if they made the wrong decision for the nation. So as this article argues they both made a decision that resulted in the most peaceful outcome, which has benefited generations of Americans and people throughout the world. While this article tries to argue that luck ruled, I believe a mix of providence and wisdom is more fitting. (Sources: U.S. Constitution and Virginia Law Review article titled, THOMAS JEFFERSON COUNTS HIMSELF INTO THE PRESIDENCY)

That is a very strong precedent and reasoning and once again for the sake of peace in our nation, unless the alleged election fraud is dealt with by the state legislatures and they appoint electors before January 6, Vice President Pence has a constitutional and moral duty to reject electors from states with two slates of electors and unresolved fraud allegations or that followed unconstitutional election laws. Constitutionally he could also add the Trump electors in his count, like what Adams and Jefferson did. The case for him doing that in Georgia is now solid: see data expert report at GA legislative hearing.

With what looks like a coordinated fraud, what was discovered in Georgia is surely elsewhere. Pence should demand the same data investigation, among other things, be done before he counts any of these states for Biden. Indeed, the burden has clearly shifted to where he needs proof for Biden, not Trump.

What Vice President Pence should not do is allow any votes in either chamber, on any state, to dictate how he counts the elector votes. He must reject the politics and do his duty, which is to use his best judgement to count electors according to what an honest election would have delivered. Anything less will disenfranchise nearly half of the voters of their vote and will be forever remembered as evil prevailing because he chose not to stand in its way when his time came.

It is weighty, until it is understood that personally the Vice President truly has much to lose and little to gain and so is best positioned to want to put country above himself, just as Adams and Jefferson came to terms with. At the end of the day Mike Pence needs to know he did all he could to deliver a count that represents an honest election.

Rejecting Biden electors may be disputed to SCOTUS, but then perhaps they will finally have to look into the serious allegations of widespread fraud, including election law-making by state entities other than the legislature.

Counting fraudulent electors would disenfranchise about 50% of voters and be a slap in the face to our fellow Americans who at great personal risk formally stood up against election fraud. These folks deserve a hearing and Vice President Pence must stand up for these good men and women who did take their stand against evil.

In hockey lingo, the Vice President as the presiding officer over the Electoral College count is the goalie. His five teammates on the ice have all fouled out and are in the penalty box and only he is left to keep Biden’s team (including the MSM and big-tech oligarchs) from pushing their puck (Joe Biden) into the goal. The noise is loud and distracting, yet the outcome will allow an election wrought with fraud to determine if our government thinks in terms of individual people and individual nations or if it falls to a collectivist viewpoint with misguided views that a single global order can deliver peace.

The Biden campaign has had plenty of time to help clear up these highly suspect elections, but they have shown no interest. As such, they are wholly responsible if things are not resolved before the elector envelopes are opened on January 6, as are each of the other constitutional safeguards that failed when called upon to guard our elections, including the press. It should be made clear that these failures in duty are why challenged electors cannot be counted.

Perhaps some passed on their duty out of concern of the far-left mobs that showed their destructive capabilities this year. However, the worst option would be to cower to those small mobs that cowardly terrorized unprotected localities. These people should have no opportunity to influence the direction of our government.

The patience of the Trump voter cannot be overstated. For decades they have tried the normal political processes, but normal failed. The courts have failed again and again. So 68 million Americans bet on a man who was outside the Washington political establishment and that turned out to be an incredibly good bet. If this election is allowed to be stolen, we will no longer be a nation run by the rule-of-law. All peaceful options will have been exhausted for the majority of Americans who are law-abiding citizens.

Unlike the small mercenary mobs we have seen this year, America will have tens-of-millions of rightly angry Americans defending their very way of life – their family, their property and their faith – from an outlaw-government. The seriousness of our situation cannot be overstated. The election must not be allowed to be stolen. The only thing that will allow Joe Biden to continue pretending he won the election after January 6 is if the good man presiding over the Electoral College count does nothing with the constitutional power wisely given to him to do good for his country.

We must help our fellow Americans come to terms with what is at stake and together build a wave that lifts as many Americans as possible to their feet to defeat this crime against all citizens of our nation.

The Honorable Mark Shepard served two terms in the state senate (2003-2006) of his home state of Vermont. He has published regular and occasional columns promoting limited-constitutional-government and free-market perspectives in print and online media since 2001.His major public arena focus since serving in public office has been to help move education from the state monopoly model to a free-market model, where parents can find an education model that matches well with their children and their worldview and protecting against the dangers of the state being in a position to control the thinking of future generations.