Living Beneath a “Vanilla Sky” 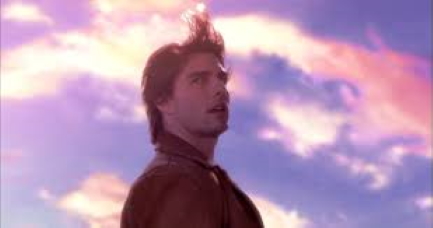 Living Beneath a “Vanilla Sky”

As I reviewed the latest round of “stimulus” and the budget, I was reminded of a movie I watched in the early 2000s. It was called “Vanilla Sky” and starred Tom Cruise, Penelope Cruz, and a talented supporting cast. For those of you who haven’t seen it, it is wonderfully done and well worth a watch, although, — I will be upfront, — it is not a “feel good” movie. It is about making the wrong choices. It is necessary to explain some of the movie in order to draw parallels to our country’s situation today, so if you have plans to watch it, — you may wish to finish reading this missive after you have had the opportunity to do so. If not, it is still a thriller and will hold your attention anyway. As an aside, the language is “salty” at one point in the beginning, then settles down. It is not for young ears, but it does make a point.

The film is an English-language adaptation of a 1997 film “Open Your Eyes.” Penelope Cruz starred in the original Spanish version, and was asked to play the role of Sofia Serrano in the English version, as well. Tom Cruise plays the part of David Aames, a wealthy playboy by inheritance. He has recently fallen in love with Sofia. A self-indulgent David has made some very bad choices prior to meeting Sofia. A former girl friend, Julie Gianni played by Cameron Diaz, has been used by David for his own self-indulgent purposes. Julie is hurt badly, and intentionally crashes a car she is driving with David in it. Julie dies, and a once handsome David is badly disfigured. He is left extremely depressed for obvious reasons.

The full picture of what is happening is not revealed right away. David’s face and other injuries are reconstructed, but he has flashes of a prosthetic face and a time when he is still badly disfigured. What David doesn’t realize, — he had opted for cryonic suspension until the medical science of reconstruction would catch up to his badly disfigured face and body. Patients are kept in a lucid dream state in order to exercise their mind during suspension. David opted for a dream based on the “vanilla sky” from a Claude Monet painting, “The Seine at Argenteuil,” hence the title of the movie. The problem? David, at times, is experiencing being pulled from his dream state, and back to his disfigured and badly damaged self. Eventually David realizes that it is 150 years later, and he is in a dream state. The love of his life and motivation for living, Sofia, is gone. He has a choice, — either stay in a dream state, or take a leap of faith and return to reality. The leap of faith requires him to leap from a very tall building in his dream. He does, and his entire life flashes before him. Needless to say, he has many regrets. Despite his wealth, he had not avoided the consequences of bad decisions.

The movie could be a metaphor for the badly damaged and disfigured country we are today, — far from our original Constitutional Republic. A majority of elected representatives at many levels, federal, state, and local, — along with many citizens, — are living in a dream state. In 2020, we have what has amounted to state sanctioned Antifa riots on the part of some governors and mayors, race riots with some elected officials promoting the concept of systemic racism, and destruction of the private middle class. Monetary and fiscal policy have been used to enable it. It is only a salve in a festering wound.

I have heard more than one person and representative say, “We are the richest nation on earth.” To which I respond, “We are the most indebted country in history.” It is nothing to brag about. When these lockdowns began, I was trying to point out to those around me that the printing of money, and borrowing it into existence will not be an answer. It does not create anything. The currency is only a means of exchange for goods and services. The Nation’s wealth is measured in GDP (Gross Domestic Product). What is called Nominal GDP is a function of money (currency) times velocity. The overall health of an economy can be measured by the velocity of money through the economy. Keeping it simple, — the more vibrant the economy, the faster each dollar is moving through various levels of the supply chain. If we are not able to move about freely, the economy slows and becomes less vibrant. Demand for products contracts, production of real things slows, supply chains are disrupted, and inventories shrink. Economies do not start and stop at the flick of a switch. It is a perfect storm for eventual inflation when currency units are created in an effort to prop up the economy while goods and services are disappearing and freedom of movement is restricted.

I am still scratching my head over the idea that “stimulus” is the treasury issuing checks for a combined $1,800 per eligible person over a year, and some being paid under the PPP (Payroll Protection Program) with little value being created. Simultaneously, we are told to close our businesses, or restrict access, carry all the risk in the private sector and be content to believe all that we are told. Meanwhile, some of our elected officials and technocrats don’t follow their own guidelines. Are we to believe, as some tell us, that this is the new normal?

But it gets worse. What bankrupt country sends money to foreign countries? The answer is us. “After adding up all of the programs that could be considered foreign aid under the Consolidated Appropriations Act of 2021, tens of billions of dollars were approved.” This was spending that was in the latest Omnibus Spending Bill passed in conjunction with another Covid Stimulus package. I was trying to think of the last foreign country that taxed its citizens and/or borrowed on their children’s future, and then sent the money to the United States. Hmmmmm! How about NO ONE! The latest “Consolidated Appropriations Act 2021” was 5,593 pages. I wonder how many voting on it took time to read it? It is full of special interest spending. One can read the entire appropriation bill here if you have six months or so of free time on your hands.

We are not living in reality, but seem suspended in a dream state under a vanilla sky. Our representatives are a reflection of many, irresponsible and self-indulgent. Eventually a slumbering citizenry will be required to take a leap of faith, and all of our bad decisions will be laid bare. We will not have a choice. Just as in David’s case, there will be no quick fixes. Let’s just hope we do not lose the love of our life as he did, — liberty. To this point, we have not had to pay a price, but this dream state is patently unsustainable.

2 Corinthians 2:11 — “Lest Satan should get an advantage of us: for we are not ignorant of his devices.”