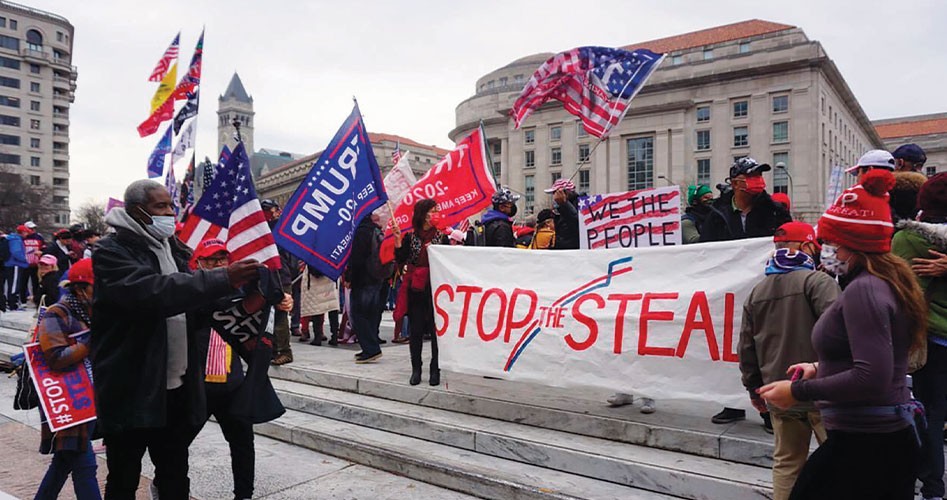 A lot of people hate President Donald Trump. Intensely. Insanely. Especially the coalition of ruling elites and wannabe ruling elites from Big Government, Big Business, Big Media, Big Social Media, Big Academia, Big Labor, Big Foundations, Big Entertainment, and Big Tech. From Wall Street to Hollywood and from the D.C. Beltway to Silicon Valley, this coalition of haters has been doing everything within its collective power to overthrow the results of the 2016 election. They have subjected President Trump to a nonstop avalanche of malice and vitriol in attacks that are unprecedented in both quantity and intensity when compared to the experiences of any of our previous presidents.

While denouncing Trump and his supporters for spreading “conspiracy theories,” they held America hostage and crippled the new administration for four years by relentlessly pushing their baseless Trump-Russia conspiracy theory. They did this in spite of the failure of congressional investigations and the combined witch hunts of Special Counsel Robert Mueller and the Hate-Trump media to find any evidence to substantiate the ludicrous charges. And this in spite of the fact that they knew early on that the whole Trump-Russia conspiracy theory had been concocted by Hillary Clinton and her Deep State allies — in collusion with Russia! Incredibly, they even continue to play the Trump-Russia card, as we’ve seen in the case of Hunter Biden’s laptop. Prior to the 2020 election, the censors of Big Media and TwitFaceGoogYou completely spiked the story, claiming it is Russian disinformation. Thus was Joe Biden saved again from having to deal with public exposure of the Biden family crime syndicate prior to the election?

In addition, we’ve had the phony impeachment travesty; the trumped-up sex scandals; sabotage by the Obama “Resistance” inside the bureaucracy; a steady stream of felonious (and treasonous) leaks by Deep State operatives in the Intelligence Community to their co-conspirators in the media; devastating, opposition-financed riots that torched our cities and whipped up racial hatred and turmoil; and finally, the Chinese Communist Party’s COVID virus that not only has wiped out much of the phenomenal economic rebound brought about by Trump, but is also radically transforming our society into a carbon copy of the Orwellian Beijing dictatorship.

Why do they hate him so? They say it is because he is not only “unpresidential,” he is also evil incarnate: a brutish, boorish, bigoted, crass, greedy, narcissistic, corrupt, misogynistic, nationalist, fascist, racist, xenophobic, white supremacist. Oh, and (they say) he’s also immature, ignorant, and incompetent to boot. Yet this incompetent “racist, xenophobic, white supremacist” has managed, under the most trying of circumstances, to do what none of his Democratic or Republican predecessors had done: create a rising economic tide that lifts all boats, including producing historic record lows of unemployment among blacks, Latinos, Asians, and women. He also attracted record numbers of black, Latino, and Asian voters and candidates to his banner and to the Republican Party, confounding and defying his enemies who had gone to such absurd lengths to vilify him in the eyes of those voter cohorts. Trump’s 2020 Republican National Convention speaker schedule was a super-diversity lineup of rainbow ethnicity, leaving his antagonists to fume and sputter because he was destroying their race-baiting campaign.

Granted, President Trump’s personality does not suit everyone. OK, hate him if you must, but don’t let the anti-Trump globalists use hate to steal the election.