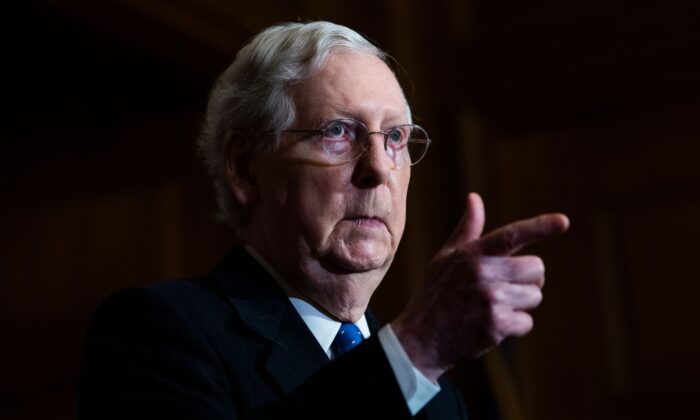 The upper house on Friday afternoon passed the bill without the president’s signature with an 80–13 vote—the first time a Trump veto has been overridden. The debate over the bill was ended earlier in the day with the same result.

The House voted late Monday to override Trump’s veto with a 322–87 vote.

Senate Majority Leader Mitch McConnell (R-Ky.) has indicated early this week that his chamber would vote to override Trump’s veto. He urged the Senate Republicans to pass the bill breaking away from the president.

The president said that the Republicans lost a chance to abandon Section 230 after the Senate override.

“Our Republican Senate just missed the opportunity to get rid of Section 230, which gives unlimited power to Big Tech companies,” he stated in a Twitter post.

Trump vetoed the NDAA on Dec. 23 for a number of reasons, including wasteful spending overseas and because the bill failed to remove Section 230—the liability shield that protects social media companies.

He said he’s unhappy with the bill also because it requires the renaming of historic military installations, restricts the president’s ability to use military construction funds for national emergency use, and contradicts his efforts to bring the U.S. troops back from overseas.

“For all of these reasons, I cannot support this bill,” Trump said in a statement on Dec. 23.

The president emphasized that despite his veto, he’s a strong supporter of the military.

“No one has worked harder, or approved more money for the military, than I have—over $2 trillion,” he wrote in his statement. “During my 4 years, with the support of many others, we have almost entirely rebuilt the United States military, which was totally depleted when I took office.”

“My Administration has taken strong actions to help keep our Nation safe and support our service members,” he added.