ARE WE HEADED FOR A CIVIL WAR? 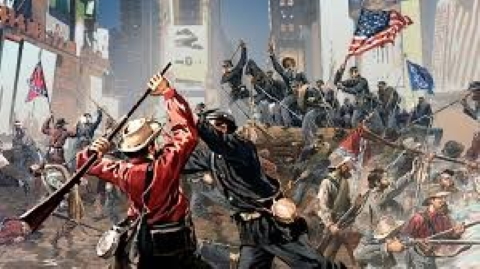 ARE WE HEADED FOR A CIVIL WAR?

Lately people have been asking me again if I think we are headed for a civil war usually referring to the Lockdown, the fraudulent election, the forced vaccines, the attack on the 2nd Amendment and the Constitution or a combination of all four.

Since I am not good at quick responses I usually just mumble something like “no I don’t think so” or “maybe.”  I have been asked that question for years.  After all it seems like every time a Democrat got elected going all the way back to Jimmy Carter, then Clinton , then Obama  people have been asking me are we headed for a civil war.

Just two weeks ago I realized that my stumbling block to answering that question stemmed from equating civil war with the civil war of the 1860’s. Actually I learned years ago that the War Between the States was a very uncivil war as was the War for Independence, both with Americans divided and fighting each other.  We have really been involved in a civil war, a fight for the heart and soul of America, since the founding of our nation.

It has mainly been a war of ideas and beliefs, pitting good against evil and right versus wrong and has usually remained civil, not violent, like the recent uncivil riots, attacks on police and businesses as well as individuals and private property.

The Pilgrims were involved in a church and state civil war with the King of England and were forced to leave for Holland and then came to America. Our founding fathers fought many civil battles with the king and his ministers mainly over the Biblical teachings on the proper roles and balance between self-government, family government, church government, and civil government. After Patrick Henry’s Liberty or Death speech in March of 1775 actual open warfare began at Lexington when the British made a move from Boston April 19, 1775 to capture the supply of gun powder, rifles and shot stored at Concord.

Once you explain to people that we are already in a civil war you have to find out how involved they are and how equipped they are.  Then are they willing to become more involved and better equipped.  I answered yes to both those questions years ago in the following way.

I became involved in the role of God and the Bible in civil government thru the church I was attending in the 1970’s.  In 1980 I read a book by John Stormer, Death of a Nation.  In the back it listed some organizations to contact for additional information, which I did.  The only organization that responded was The John Birch Society in the form of a visit from the area coordinator Art Thompson.  He suggested I subscribe to the Review of the News and or the American Opinion magazine.  I subscribed to both as well as reading more and more books.

The Bible says we need to put on the full armor of God so as to be equipped to stand firm against the schemes of the devil. That involves much study, prayer and fellowship or joining with other believers in a local church.  Many Christians and conservatives study and pray but make the mistake of not joining with others to more effectively fight the enemy.  They very often become discouraged, feel all alone, and leave the field of battle.  I didn’t want to make that mistake so I joined the John Birch Society (JBS) in 1981 and have been an active member ever since.

A good example of why we should join groups to be more effective happened just last week. Gun Owners of America asked all their members to contact the ATF to oppose the ATF plan to limit the use of pistol braces.  Tens of thousands of GAO members contacted the ATF and they decided not to implement that measure. I always sign letters and petitions from organizations so that politicians know that many thousands of people are either supporting or opposing their agendas.

In the late 80’s and 90’s in addition to many Birch activities I joined with friends in organizing study groups using the God and Government books by Gary DeMar, the Constitution course by John Eidsmoe, and the Fundamentals for American Christians study course put together by Rus Walton of the Plymouth Rock Foundation.  So we have to educate ourselves and then begin to educate others on the issues.  I have done this through selling, sharing and giving  books, magazines, flyers and reprints from the JBS and many other organizations to people at fair booths, gun shows, at church, parades, the American Opinion Bookstore, online, speaker programs, local public access TV, letters to the editor, meetings at my home and at work.

I consider the JBS to be the most important group I belong to because they understand the satanic conspiracy that we face, they are very organized with a full time field staff, a monthly bulletin that keeps every member nationwide focused on specific issues that need to be acted on in a coordinated effort, and they have the educational materials in many forms to educate myself and to share with others.

An example of sharing with others is, I know, several, JBS members who order 100’s of extra New American magazines to sell or give away. This fall I have been stopping at homes with Trump signs and in most cases they were not familiar with the New American and were happy to take a copy.  I gave two copies to a contractor at Lowes who had a Trump bumper sticker on his truck and have given several Lockdown Madness TNA issues to people complaining about wearing masks.

So the shorter answer to give when people ask me now if we are headed for a civil war is this.  We are already engaged in a civil war of ideas and beliefs.  We all need to get more involved in creating sufficient understanding so that we can use our soap boxes to win this civil war at the ballot box and the jury box and avoid resorting to the cartridge box in an uncivil war that whether won or lost will result in needless loss of lives and property.

I don’t make New Year’s resolutions but every year I encourage myself and I am encouraging you to become more engaged in this civil war, a real fight for the future of America.  Please consider  better equipping yourself  by subscribing to The New American magazine , reading books from Shop JBS, or John Eidsmoe, Gary DeMar, Rus Walton or many other fine authors,  using online sources such as JBS.org, TheNewAmerican.com, InlandNWReport.com, FaithandFreedom.us by Gary Randall  and many many more, as well as ChristianRadioNetwork on Facebook and on radio at 630 AM.

There are many fine groups and organizations out there.  Below is a list of some of the organizations I belong to and support and I encourage all of you to consider joining them.

Some books I highly recommend are The War between the States America’s Uncivil War, God and Government by Gary DeMar, To Pledge Allegiance On the Road to Independence by Gary DeMar, Christianity and the Constitution by John Eidsmoe, To the Victor Go the Myths and Monuments by Art Thompson, and The Fight for America by Joseph McCarthy.

Please make it a point to talk to more people and share more information with them personally and by e-mail.  And most importantly please join a group and get involved with them in this truly civil war battle so that we might become more effective in avoiding an uncivil war.