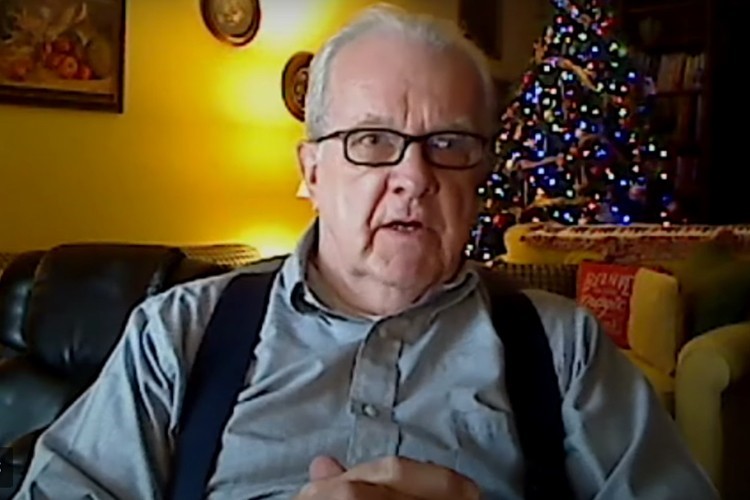 Is all talk about the use of CIA computer programs called Hammer and Scorecard to digitally change millions of votes and steal the election for Joe Biden sheer “nonsense”? It is according to Snopes, as well as the other establishment-anointed “fact checkers” such as PolitiFact.com, FactCheck.org, BuzzFeedNews.com, and MSN.com. So that settles the matter, right? Actually, it does not.

As has been reliably shown in critical reports by diverse sources (see here, here, here, and here), including The New American (see here), Snopes is notorious for its left-leaning bias. Ditto for many of the other “fact checkers” that comprise the gaslighting chorus that pretends to debunk any claim that contradicts the party line laid down by the Fake News industrial complex: “Nothing to see here, just silly conspiracy theories, move along.” (We’ll return to Snopes and the Big Media-aligned coterie of fact-check fraudsters later on.)

In an interview with The New American’s senior editor William F. Jasper on December 21, National Security Agency (NSA) whistleblower J. Kirk Wiebe discussed the massive vote tampering that took place in the 2020 presidential election. He included evidence of vote fraud done via computer describing the criminal use of the CIA-developed Hammer and Scorecard programs, which many voices in the Fake News echo chamber claim don’t exist. He also discussed the Dominion Voting Systems software and machines used in many states, and the abysmal state of security and integrity of our voting system, a point that many independent studies by nonpartisan experts have been warning about for years.

Wiebe served in the NSA for decades and has been a key sentinel in many major national security crises and challenges. Together with the legendary Dr. William Binney and Ed Loomis, he helped develop many of the software programs and technologies that are crucially important in finding, monitoring, and tracking terrorists globally, as well keeping tabs on foreign state actors such as Russia, China, Cuba, and Iran. Wiebe, Binney, and Loomis were pioneers in the computer age for Signals Intelligence (SigInt).

For his many contributions to our nation’s security, Wiebe was awarded the Meritorious Civilian Service Award, NSA’s second highest distinction. Wiebe, Binney, and Loomis left the NSA when they learned that programs they had helped develop to keep America safe from foreign enemies were being used illegally by the NSA to spy on virtually all Americans. The trio became whistleblowers to alert American elected officials and the American people that the federal alphabet spy agencies are out of control.

Much of the media that treated them as heroes when they were exposing the illegal surveillance-state operations of the Republican Bush administration had little to no interest in their continued warnings when the Democrat Obama administration continued — and expanded — the illegal surveillance. Obama’s Director of National Intelligence (DNI) James Clapper publicly lied and committed perjury in congressional hearings when he stated that NSA has not/does not illegally spy on and collect data (including phone calls, texts, and emails) of millions of Americans. Yet, not only was Clapper not prosecuted for perjury and criminal violation of the privacy rights of tens of millions of Americans, he was rewarded with a commentator job at CNN. Meanwhile Wiebe, Binney, and Loomis continue to be considered media outcasts because they refuse to go along with the party line narrative of Big Media and the Deep State “Intelligence Community” (IC).

On November 11, The New American conducted a video interview with Lt. General Thomas G. McInerney (USAF, retired), who has been the most high-profile expert warning about the digital side of the election rigging in tandem with the more traditional vote-stuffing methods. The three-star general, a highly decorated Vietnam War fighter pilot (over 400 combat missions) and top USAF/NORAD commander and DOD official, emphasizes that what we have recently experienced is not simply vote fraud, but actual cyber warfare carried out by “enemies foreign and domestic.” General McInerney laid out the criminal use of the secret Hammer-Scorecard program by the Obama administration (including DNI Clapper, CIA chief Brennan, and FBI director Comey) to throw U.S. elections. 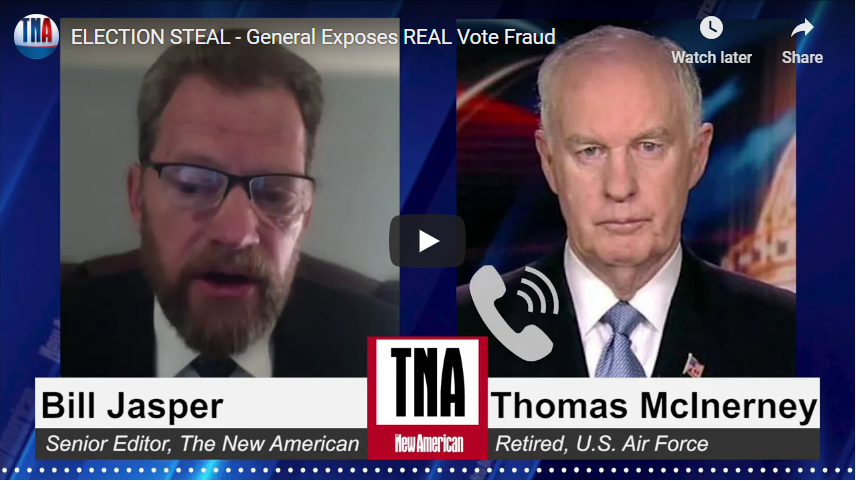 Using his vast national security experience and hi-tech knowledge, Kirk Wiebe has joined together with General McInerney, General Paul Vallely (USA, retired), Dr. Binney, and other military and national security professionals to expose this existential threat to our Republic and our freedom. Wiebe argues that this massive election fraud, on an unprecedented scale, is the latest step in the ongoing, treasonous coup effort against President Trump by members of the Deep State, including high-level members of the Intelligence Community, which he served for many years.

Snopes and the “Factchecker” Posse Fail in Their Debunking Effort

Back to Snopes. The title for its November 9 attack on the Hammer-Scorecard thesis is, “Is There a ‘Hammer and Scorecard’ Operation to Manipulate Vote Counts?” Snopes then answers its own question with a subtitle that reads: “The director of the U.S. Cybersecurity and Infrastructure Security Agency (CISA) called the rumors ‘nonsense.’”

The body of the article begins:

In the days after news outlets called the 2020 U.S. presidential election and projected that Joe Biden would be the 46th president of the United States, the internet was flooded with various unfounded claims about voter fraud. One popular rumor concerned something called “Hammer and Scorecard.” While this rumor was wide ranging, it basically held that a “deep state” supercomputer named “Hammer” and a computer program called “Scorecard” were being used to alter vote counts.

Reiterating, in the next paragraph, that the existence of Hammer-Scorecard is only a “rumor,” Snopes goes on to state, “We should note that Christopher Krebs, the director of the Cybersecurity and Infrastructure Security Agency (CISA) in the U.S. Department of Homeland Security — a position he was nominated to in 2018 by U.S. President Donald Trump — has called the ‘Hammer and Scorecard’ rumors ‘nonsense.’”

Snopes then imbeds a tweet from Krebs at CISA: 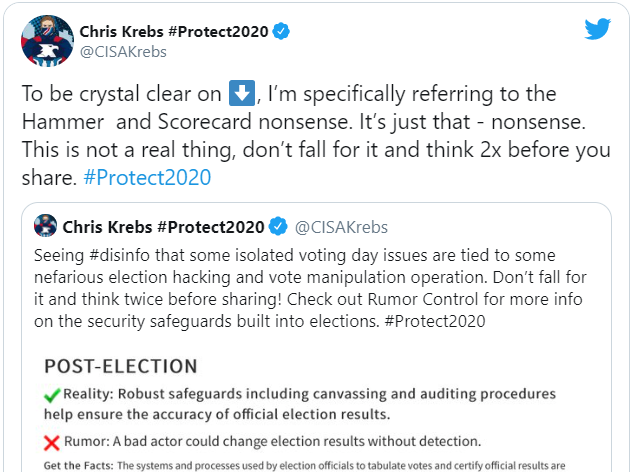 Is Chris Krebs a Reliable Authority?

Snopes appears to believe that an argument from authority (especially a biased authority with conflicts of interest) can pass for dispositive evidence. Chris Krebs may appear to be an impressive authority by reason of his (former) position, but as we have shown (“Media Darling and Fired Cyber Security Chief Chris Krebs Is a Deep State Operative”), Krebs cannot be reasonably considered an impartial, nonpartisan observer. First of all, as we pointed out, Krebs and his agency have no competence or authority to issue any pronouncements concerning election fraud, as CISA and Krebs have acknowledged — after the fact, though the Krebs-CISA admissions have not received even a scintilla of the coverage that the media have lavished on their statements denying there was any election fraud.

Secondly, publicly available evidence indicates that Krebs (along with his CISA deputy, Matt Travis) is indeed a very partisan political hack, with deep ties to James Clapper, Michael Chertoff, Bill Gates, and other virulently anti-Trump individuals and groups. All of which is, naturally, completely ignored by Snopes, PolitiFact and the rest of the “fact checker” posse. They all rely heavily on the Krebs/CISA statements to “debunk” Scorecard-Hammer.

On the other hand, we have Generals McInerney and Vallely and NSA cyber experts Wiebe and Binney making very specific charges and assertions about Scorecard-Hammer — and providing evidence, along with their acknowledged expertise. Do Scorecard-Hammer exist? Snopes/Krebs say it’s just “rumor.” Well, the shortcut to a superabundance of solid evidence, including court documents, affidavits, court rulings, and testimony, showing that the program was indeed created by the CIA, can be accessed through the meticulously researched, in-depth reporting by investigative journalists Mary Fanning and Alan Jones at TheAmericanReport.org, which we will be covering in greater detail in forthcoming articles and interviews.

In short, among the evidence Fanning and Jones cite is the March 3, 2018 ruling by U.S. District Judge Richard J. Leon in the case of Dennis Montgomery, et al, Plaintiffs, v. James Comey, Defendant, in which Judge Leon states that counsel for the government assured the court that Montgomery’s hard drives are being kept in a “secure facility.” Dennis Montgomery is the CIA contractor/inventor/technical whiz (his detractors say “con man”) who invented Hammer for the CIA for the “War on Terror.” Judge Leon states that the government counsel, representing James Comey and the FBI, “represented to this Court that the ‘hard drives are in a secure facility with the Intelligence Community’s Office of Inspector General” and that there was “no risk” that they were “going to be destroyed anytime soon.” Montgomery’s 47 hard drives reportedly contained over 600 million pages of illegally harvested surveillance data.

In his interview with The New American, Kirk Weibe stated that earlier this year, nearly eight months before the November election, he, along with his wife and Dr. Binney, delivered a thumb drive with 85,000 documents from Montgomery’s hard drives to the House Intelligence Committee in Washington, D.C. The purpose of providing the documents to Congress, he said, was to show them the gravity of our current situation and to warn them that these capabilities could be used in the November election. His warnings, apparently, went unheeded.