Ted Cruz on Those Who Committed Voter Fraud: “Put Them in Jail” 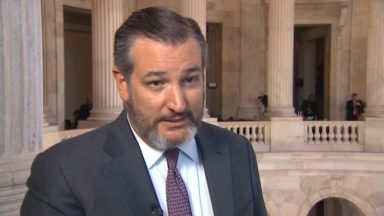 Ted Cruz on Those Who Committed Voter Fraud: “Put Them in Jail”

At a rally in Savannah, Georgia this weekend, Sen. Ted Cruz (R-TX) said that it’s essential to have all hands on deck to make sure that anyone and everyone involved in committing fraud in the 2020 election is held fully accountable for their actions.

Cruz’s argument comes hot on the heels of a tweet from lawyer Lin Wood, who suggested last week that President Donald Trump may need to bring the justice hammer down on Georgia officials like Gov. Brian Kemp and Secretary of State Brad Raffensperger.

“President Trump @realDonaldTrump is a genuinely good man. He does not really like to fire people. I bet he dislikes putting people in jail, especially ‘Republicans,’” Wood tweeted. “He gave @BrianKempGA & @GaSecofState every chance to get it right. They refused. They will soon be going to jail.”

It should be noted that the president himself retweeted Wood’s suggestion.

No state in the 2020 contest was closer than Georgia. The final tally gave the state’s total to Joe Biden by a margin of only 12,000 votes, which translates to 0.2 percentage points. Trump claims that, were it not for undetected fraud in the election, he would have easily reigned victorious over his opponent.

“They cheated, and they rigged our presidential election, but we will still win it,” Trump said earlier this month. “And they’re going to try and rig this election, too.”

“This election,” of course, refers to the upcoming runoffs that will determine who controls the U.S. Senate for the next two years. Republican incumbents David Perdue and Kelly Loeffler are defending their seats against Democrats Jon Ossoff and Raphael Warnock. On Saturday, Cruz implored Georgia Republican voters to remember the ultra-high stakes of the race.