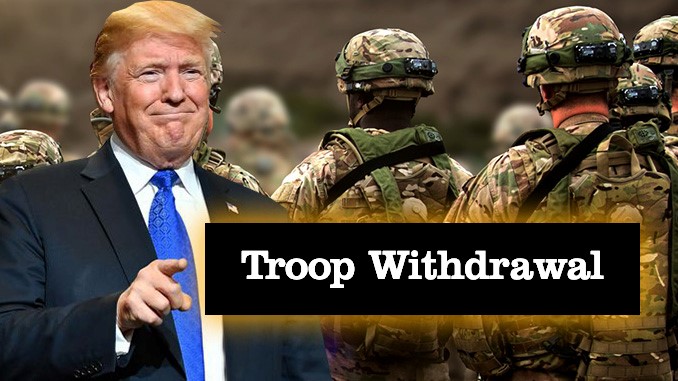 It may have come late in his presidency, but President Donald Trump appears determined to end this term in office by following through on his promise to pull as many troops out of Afghanistan and Iraq as possible.

He is making the move against opposition from generals and leading figures in Congress, including the likes of Majority Leader Mitch McConnell. If this decision is to be a swansong of a kind at the end of this presidency, it will speak directly to promises he made to his voters and to the nation to finally bring our troops home from the two major conflict zones that have cost America much in blood and treasure, and led to the deaths of hundreds of thousands of civilians in those two countries. He has never deviated from his stated aim to draw down troop strengths, leading to eventual withdrawal, and it now appears the draw-down has been successful. It should allow him to achieve his objective early in the new year. He had planned a withdrawal by Christmas, but that goal may well have been thwarted by some in the Pentagon who purposefully slowed the process.

There are those claiming that this is an effort by the president to create complications for a Joe Biden presidency, but such a charge lacks credible evidence. In fact, President Trump could well be doing Biden a favor because Biden is on record advocating for the moves the president is now making. Unlike Biden and Barack Obama, however, President Trump is following through on promises he made. He may well have chosen to act now because he knew that he would face opposition from neocons on both sides of the aisle on Capitol Hill. That may be the very reason why he did not open up the policy debate, but instead decided to act, using his executive powers.

There are, however, imponderables, and it would be unwise to dismiss them, given that the history of our commitment to Iraq and Afghanistan has never been smooth, and any decisions regarding withdrawal inevitably come with considerable risks. There is also the fact that, just as President Trump made an impetuous decision to abandon the Kurds in Syria, this sudden move came without consulting his military leaders or his allies, especially NATO. That alone can have consequences leading to a weakening of the alliance—an alliance many America-firsters don’t approve of anyway. Many NATO service members died in Afghanistan and Iraq supporting American-led wars, but, in the long run, the U.S.-NATO relationship will survive this episode in our history.

The real imponderables are: Who is likely to benefit from a U.S. withdrawal and what does withdrawal really mean? Does it mean disengagement? The latter question is difficult to answer, particularly with regard to Iraq. Israel is going to press Congress to keep an advisory force there because of Iran, or to maintain a sizeable mercenary force at U.S. bases in both Iraq and Afghanistan. Presently, it is difficult to determine how many contractors are based in Iraq. If the Pentagon knows the exact figure, it is not revealing it. Therefore, it is possible that a withdrawal will not mean disengagement. Instead, it will require a compromise built around maintaining a small contractor force with the stated purpose of training Iraqi Special Forces. Iran will undoubtedly be thrilled, but it is clear that President Trump felt that withdrawal was now fully justified, given that the reason given that we had troops in Iraq was to support the war against ISIS. This reason no longer applies since ISIS no longer holds territory in Iraq or in neighboring Syria.

That leaves the Afghan withdrawal, which will effectively be total disengagement. Managing an end to this conflict has proved contentious because many observers believe the Taliban leadership is an untrustworthy peace partner, and that once Taliban leaders see the backs of the American forces, they will allow al Qaeda to return as a permanent force. Pakistan, which has been a malign influence in Afghanistan, will also reassert its control over the Taliban and large swaths of the country. Some have speculated that India may move in and take over the U.S. role of training the Afghan army. That may be wishful thinking and would be something Pakistan would oppose militarily, if necessary.

A former Russian diplomat who worked in Pakistan told AFP off the record that any speculation about what may happen when the U.S. withdraws from Afghanistan is futile, and that it was long past time an American president ended U.S. involvement in Afghanistan.

“Donald Trump is doing something his predecessors lacked the courage to do,” he added. “It is well past time the Americans learned from our disastrous role in Afghanistan. The Taliban knows that even if America leaves, should it feel threatened, it can strike at a moment’s notice and the next time it will bring all its assets to bear without putting one soldier on the ground. Russia, China, and India will be watching, too. If al Qaeda is reinstated as a partner by the Taliban it will end badly for the Taliban. Trump is doing the right thing.”

Richard Walker is the nom de plume of a former New York mainstream news producer who grew tired of seeing his articles censored by his bosses.