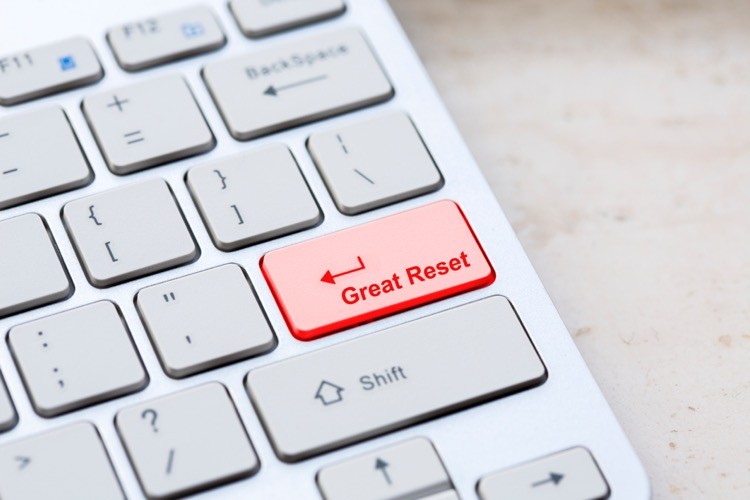 It really is no secret. Prime Minister Justin Trudeau did, after all, say during a September United Nations conference that the coronavirus pandemic could be used to advance a “reset” — and he did actually use that word. But while the Canadian leader delighted in the prospect, another prominent figure who spoke of the scheme took a very different view.

In fact, warned top Catholic prelate Cardinal Raymond Burke, the China virus is being used by supporters of “The Great Reset” to promote an “evil agenda.”

Burke is warning that the World Economic Forum’s “Great Reset” initiative in response to the coronavirus pandemic is an attempt to manipulate “citizens and nations through ignorance and fear” at the same time that Marxist materialism is taking hold in the United States.

Burke, the former archbishop of St. Louis and now a member of the highest judicial authority in the Roman Catholic Church, made his comments in his homily on the Feast of Our Lady of Guadalupe on Dec. 12, Rome correspondent Edward Pentin writes on his website.

“The worldwide spread of Marxist materialism … now seems to seize the governing power over our nation,” Burke said of the U.S., adding that other nations are also undergoing a similar crisis. “To attain economic gains, we as a nation have permitted ourselves to become dependent upon the Chinese Communist Party, an ideology totally opposed to the Christian foundations upon which families and our nation remain safe and prosper.”

COVID-19, he said, is being “used by certain forces, inimical to families and to the freedom of states, to advance their evil agenda. These forces tell us that we are now the subjects of the so-called ‘Great Reset,’ the ‘New Normal.’”

The cardinal also pointed out in his sermon (video below) that just when “we need to be close to one another in Christian love, worldly forces would isolate us and have us believe that we are alone and dependent upon secular forces, which would make us slaves to their godless and murderous agenda.” 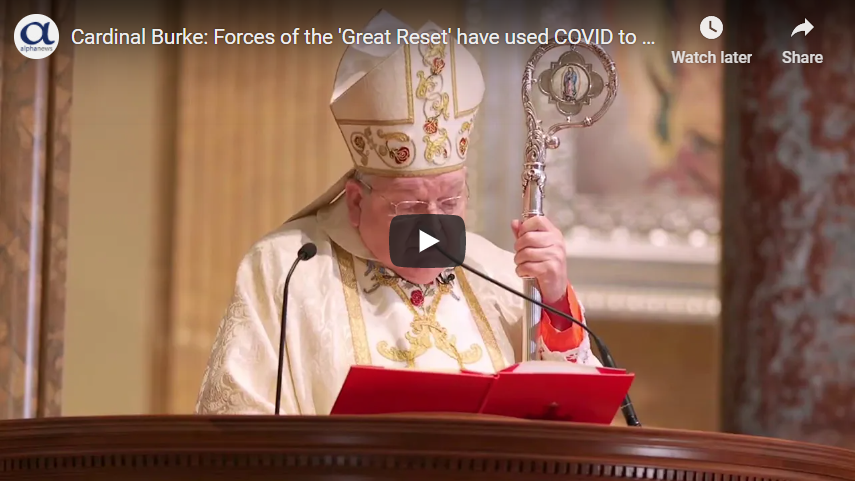 Burke’s conclusion is entirely rational. After all, many governments have shut down church services, even at times arresting those who dare gather to worship, while allowing liquor stores and abortion mills to remain open, claiming they’re “essential.” Politicians have also with a wink and nod encouraged large and violent BLM protests/riots while disallowing peaceful anti-lockdown demonstrations.

Then there are the leaders — Governor Gavin Newsom (D-Calif.), Representative Nancy Pelosi (D-Calif.), Dianne Feinstein (D-Calif.), and Mayor Lori Lightfoot (D-Chicago) among others — who’ve been caught blithely violating the China virus regulations (e.g., mask wearing, social distancing) they imperiously foist on the “little people.” So does it really seem as if they’re taking SARS-CoV-2 seriously?

Perhaps they’re mindful of how most people contracting the virus will have a 99.5-plus percent survival rate. And perhaps, just maybe, they believe what curiously ignored studies show: that asymptomatic China virus spread is rare to nonexistent.

As for Cardinal Burke, he isn’t the first Catholic prelate to sound the COVID Con alarm. In November, “Archbishop Carlo Maria Viganò wrote an open letter to President Trump claiming that the COVID-19 pandemic is part of a plot to impose a ‘health dictatorship,’” News Punch reminds us.

“‘We see heads of nations and religious leaders pandering to this suicide of Western culture and its Christian soul, while the fundamental rights of citizens and believers are denied in the name of a health emergency that is revealing itself more and more fully as instrumental to the establishment of an inhuman faceless tyranny,’” the site also quotes Viganò as having written.

“He added that The Great Reset sought to inflict ‘the imposition of liberticidal measures, hidden behind tempting promises of ensuring a universal income and cancelling individual debt,’” News Punch continues.

As mentioned earlier, the “reset” agenda is not mere suspicion, but was revealed by leftist Prime Minister Trudeau himself in late September. Speaking via video (below; relevant portion begins at 2:05) he unabashedly told the U.N., “This pandemic has provided an opportunity for a reset; this is our chance to accelerate our pre-pandemic efforts to re-imagine economic systems.” (As with the police, “re-imagine” has become a popular leftist buzzword.) 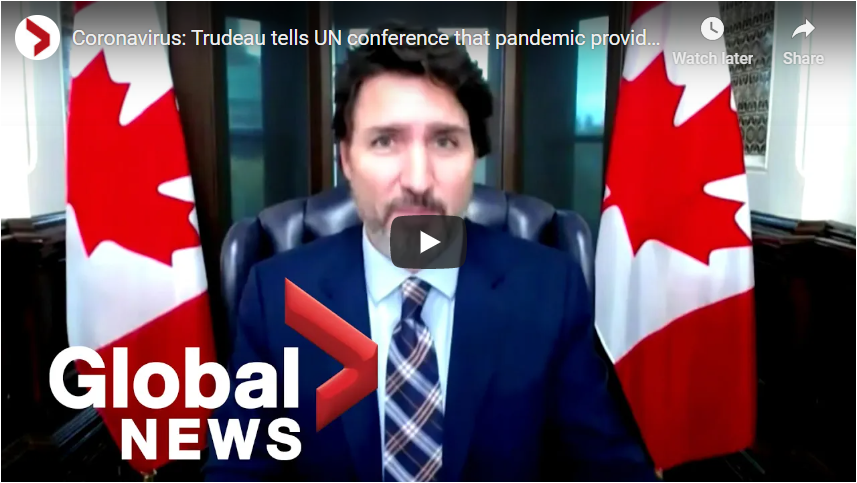 Yet such machinations are nothing new. Resurrecting an infamous quotation that he’d first uttered in 2008, former Chicago mayor and ex-Obama administration official Rahm Emanuel said of the China virus in March, “Never allow a crisis to go to waste.”

As to this, “The world is approaching a tipping point on climate change when protecting the future of civilization will require dramatic interventions,” wrote MarketWatch’s Mariana Mazzucato in late September. “Avoiding this scenario will require a green economic transformation — and thus a radical overhaul of corporate governance, finance, policy, and energy systems.”

“Under a ‘climate lockdown,’ governments would limit private-vehicle use, ban consumption of red meat, and impose extreme energy-saving measures, while fossil-fuel companies would have to stop drilling,” she continued. “To avoid such a scenario, we must overhaul our economic structures and do capitalism differently.”

But while Mazzucato may actually believe this is just about saving the Earth, those pulling the strings may take a different view. Just consider how Saikat Chakrabarti, chief of staff for Alexandria Ocasio-Cortez (D-N.Y.), reportedly said in early 2019, “The interesting thing about the Green New Deal is, it wasn’t originally a climate thing at all.… Because we really think of it as a how-do-you-change-the-entire-economy thing.”

So for the power mongers, it all often comes down to what a Students for a Democratic Society (SDS) radical admitted in the 1960s: “The issue is never the issue. The issue is always the revolution.”

It may be tempting here to quote FDR’s line that there’s “nothing to fear but fear itself,” but that’s no truer now that when he uttered it. The fear is a tool, but the despotic monster it’s being used to create should definitely be feared — but not nearly as much as it’s loathed.