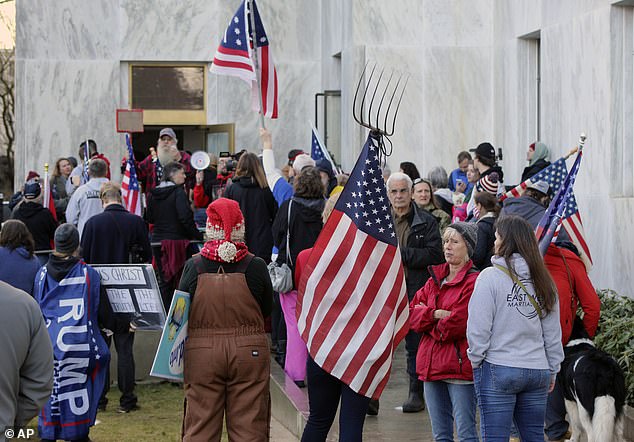 A group of anti-lockdown, pro-Trump protesters forced their way into the Oregon Capitol Monday. One report shows some of the protesters were armed with rifles, handguns, and even a pitchfork.

A large group forced their way into the capitol as the legislature met on the opening day of the state’s third special session. The protesters expressed opposition to the state’s ordering of certain businesses to close.

While legislative sessions are normally open to the public, today’s was closed to anyone other than lawmakers, police, some staff, and reporters, the Oregon Statesman-Journal reported. Legislators met to attempt to pass pandemic-relief measures including landlord and tenant assistance.

Reports on social media show the group of protesters gathered outside the Oregon Capitol on Monday morning.

Salem Reporter journalist Jake Thomas tweeted a video showing a woman urging protesters to enter the capitol. One man reportedly shouted that people should be willing to get maced or arrested. 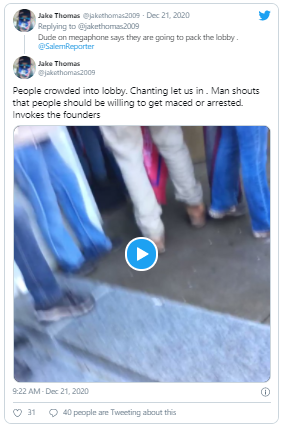 State police pushed the crowd back and at one point deployed blue pepper spray. 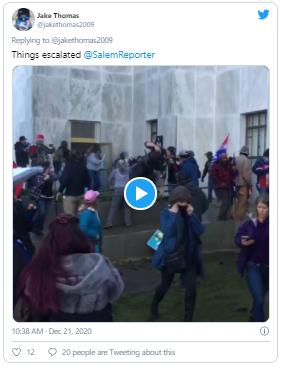 Police say the pepper spray was used in response to officers being sprayed by the protesters.

“At one point we used pepper balls. I don’t know what else,” Salem Police Lt. Teven Upkes told the Statesman-Journal. “When people attempted to come in to the building they actually used pepper spray and other things on officers. In return we used those to separate ourselves and get them to hold that spot. So I don’t know what all was used but I know at least pepper ball was used.”

At one point, Oregon State Senator Dallas Heard (R-Roseburg) came out and addressed the protesters. 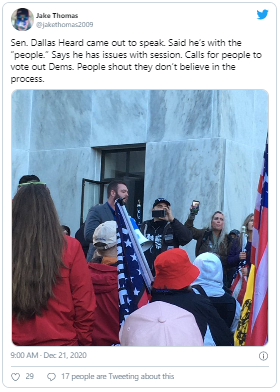 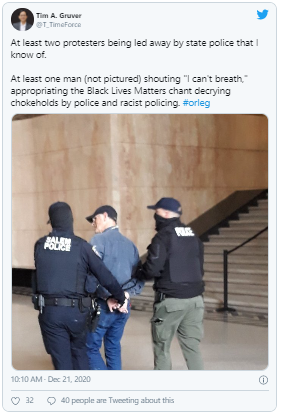 During the session, Senator Heard accused Oregon Governor Kate Brown of carrying out a “campaign against the people and children of God.” He stood for a 30-second moment of silence, one Twitter user posted. 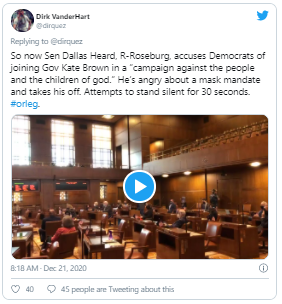 “This is yet another illegitimate session in which you, the democratic majority, have declared the people unfit to participate in person in their own Capitol building,” Heard said on the floor of the Senate, according to KEZI ABC9. “Let the record reflect that I am in fierce opposition to any legislation that this illegitimate assembly may pass today. You will be held accountable for this in the coming years.”

“I declare my right to protest against your false authority and remove my mask,” the senator said while taking off his mask. “I will stand here for 30 seconds while you decide if you are fascists willing to use the government to force and override my rights or to prove that you are nothing more than bullies and false authorities.”

The Daily Beast and the Daily Mail reported some of the protesters gathered outside the capitol were armed with “black rifles” and handguns. Photos in both articles show a woman armed with a U.S. flag on a pitchfork.

Another video tweeted by Oregon Statesman reporter Abigail Dollins shows protests trying to force their way through a locked door. 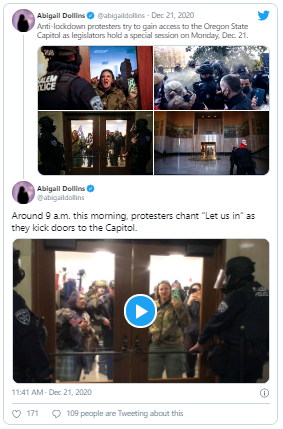 Salem Statesman photojournalist Brian Hayes tweeted a video showing some of the protesters who succeeded in gaining entry inside the capitol. At least one of those protesters appears to be armed with a rifle. 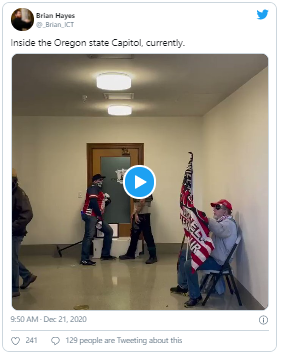 He also tweeted a video showing protesters tearing down a covering on a vandalized marble relief outside the capitol. 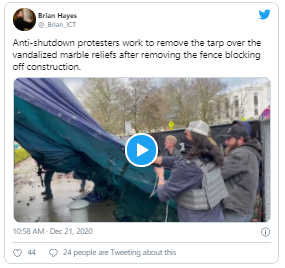 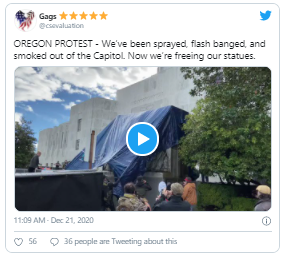 Bob Price serves as associate editor and senior news contributor for the Breitbart Texas-Border team. He is an original member of the Breitbart Texas team. Price is a regular panelist on Fox 26 Houston’s What’s Your Point? Sunday-morning talk show. Follow him on Twitter @BobPriceBBTX and Facebook.