Trump And Pence Are Still Fighting – So Must We 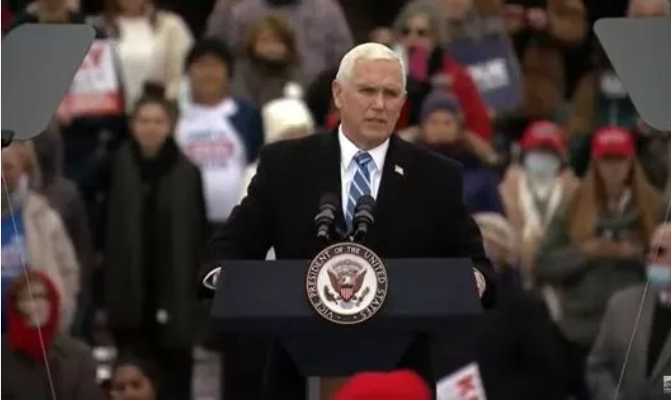 Trump And Pence Are Still Fighting – So Must We

Every time a spineless judge refuses to hear the evidence of election fraud in the 2020 presidential election or even admits it, but claims there’s nothing that can be done, and every time spineless Republican legislative leaders say they won’t fulfill their constitutional duties or use their constitutional power to appoint Electors untainted by fraud, a chorus of pundits burst forth with demands that the President throw-in the towel and admit defeat.

President Trump and Vice President Pence, to their great credit, are having none of it and have determined they will fight the election until every avenue to cleanse the tally of illegal votes has been exhausted.

And so should we.

What’s more, as Mike Pence noted, the election contests are far from over, despite what the establishment media wants you to believe.

Jesse R. Binnall* of Harvey & Binnall, testified recently that his team of investigators identified 130,000 UNIQUE instances of voter fraud in Nevada. He testified the data scientists made these calculations, not by estimations or statistical sampling, but by comparing the list of ACTUAL voters, with other lists, most of which are publicly available. To put it simply, they explained their methods so that others could check their work. And his evidence has NEVER been refuted, only IGNORED.

Furthermore, Mr. Binnall testified that two Clark County, Nevada technical employees came forward, completely independent of each other, and explained that they discovered that the number of votes recorded by voting machines and stored on USB devices would CHANGE between the time the polls would close at night, and when they were re-opened the next morning.

In other words, votes were literally appearing, and disappearing, in the dead of night. When Mr. Binnall’s team attempted to verify the integrity of these voting machines on behalf of President Trump, they were allowed only a useless visual inspection of the outside of a USB drive. They were denied a forensic examination. When they tried to obtain testimony or documents from Clark County, Nevada officials, they obstructed and stonewalled. When they filed suit, state officials and even courts delayed proceedings for days, but the offered the Trump lawyers merely hours to brief and argue their cases.

These cases, and others with similar evidence and similarly oppressive procedural biases, should be pursued to the fullest extent of the law before any “Republicans” even think about throwing-in the towel.

And the litigation in various state and federal courts doesn’t even take into consideration the plan of Rep. Mo Brooks** to invoke the direct constitutional power of Congress to make the final determination of which slates of Electors should be recognized as the legitimate Electors for the contested states of Arizona, Georgia, Pennsylvania, Wisconsin, Michigan, Nevada and New Mexico.

Mike Pence was right, the presidential “election contest continues in courthouses across the land” and if Trump and Pence are going to keep fighting until every illegal vote is thrown out so should we conservatives.

*In addition to working on the Trump vote fraud litigation, Mr. Binnall was a member of the team defending General Mike Flynn.

** We constitutional conservatives must find a Senator with the same level of principled commitment to follow the Constitution that Rep. Mo Brooks is displaying. That means conservatives must call, email and visit their Republican Senators to demand that they object to the same slates of Electors to which Rep. Brooks objects. Call the toll-free Capitol Switchboard (1-866-220-0044), tell Republican Senators to object to the same slate of Electors that Rep. Mo Brooks objects to including Arizona, Georgia, Pennsylvania, Wisconsin, Michigan, Nevada and New Mexico.