‘Temporary President’ Biden Leading The Free World Off To The Gulag 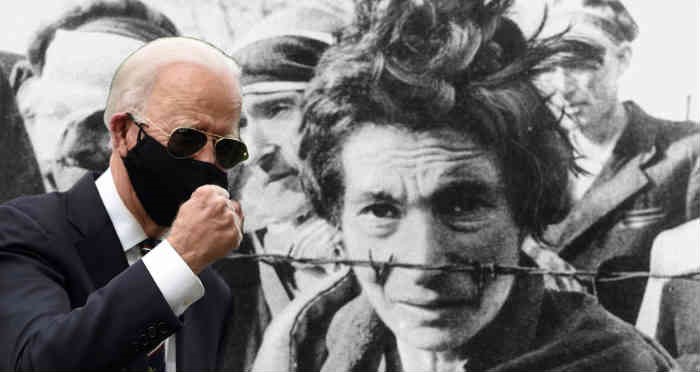 ‘Temporary President’ Biden Leading The Free World Off To The Gulag

Meanwhile, the only way to never hear the horrible clank of the Gulag Gates behind you, is to defiantly refuse to go there

Take your warmest life memories with you if and when the inauguration of ‘Temporary President’ Joe Biden makes way for the opening of the Gates of Hell—the Gulag—for all of humanity.

Memories are all the masses will have left—and over time the same bolsheviks who openly stole the 2020 Election will steal those too, whenever they find the way.

The saddest part about going into the Gulag is that your children and grandchildren with all the innocent toys of childhood are going with you, leaving you to wonder what will happen to them after you’re gone.

In this dark new era of the Great Reset, Washington power brokers will come at you live streamed over the ‘Net

All of the above went along with the Communist globalists—even while knowing that the first thing the regime mandates is getting rid of the useful idiots who brought them into power.

Much as so very many do not wish to hear it, government-mandated lockdowns were only the waiting room for the coming Gulag.

In Russian accents they say: “No God in Gulag”.

No hope, no change, as soon as the last of Hillary’s deplorables have been rounded up.

During the past 10 months, authorities wanted to assure themselves that there would be no public uprising over the lockdowns—and there never really was.

In this dark new era of the Great Reset, Washington power brokers will come at you live streamed over the ‘Net.  No need for town halls while everyone’s in lockdown watching television.

Life Before Gulag (LBG) will be wiped out as part of the Cancel Culture, along with the American Dream cherished by millions in many other nations.

There will not be any Bravehearts or Aleksandr Isayevich Solzhenitsyns in the Gulag where everyone will be equal; spoon-fed Fake News daily by the MSM and social media just as prisoners of another day were fed bread and water.

Aleksandr Solzhenitsyn, winner of the Nobel Prize in Literature, who survived eight years of Gulag incarceration, gave the term its international repute with the publication of The Gulag Archipelago in 1973. The author likened the scattered camps to “a chain of islands,” and as an eyewitness he described the Gulag as a system where people were worked to death. In March 1940, there were 53 Gulag camp directorates (colloquially referred to simply as “camps”) and 423 labor colonies in the Soviet Union. Many mining and industrial towns and cities in northern and eastern Russia and in Kazakhstan such as Karaganda, Norilsk, Vorkuta and Magadan, were originally blocks of camps built by prisoners and subsequently run by ex-prisoners. (Wikipedia)

Led from the fetid swamp by a 79-year-old millennial “President Elect” who hid out in his own Delaware basement during all of Election Year, the millennials dependent on promises of “free stuff” will go all too willingly into the Gulag.

Millennial Queen Alexandria Ocasio Cortez, by dint of wearing $30-a-tube crimson lipstick, is already a capitalist pig, whose Green New Deal is being promoted by 99% of the media.

School age children, whose imaginations were not so long ago, nourished by Grimm’s Fairytales, are now living the nightmares of Death by Pandemic and Global Warming.

Captives of the modern-day Gulag lost that ability by reading the purloined news and a steady diet of cable television.

Biden’s presidency will be short-lived, as he passes the presidential mantle on to Kamala Harris before stumbling off the world stage on his broken foot, but a live streamed Harris is only a front for Barack Hussein Obama, who sees her as his long-coveted Third Term.

But while the masses are confined to the new Lock Down, known as the Gulag, all of those who brought the Gulag about, will soon disappear as the Communists ‘disappear’ all their useful idiots.

Solzhenitsyn got out of the Gulag Archipelago—but only after years of unimaginable inhumane torment.  The reason for his ultimate survival was that he never stopped thinking for himself.

Captives of the modern-day Gulag lost that ability by reading the purloined news and a steady diet of cable television.

Hard to believe that while waiting for the gates to shut behind all those coming into the Gulag, they were reading stories about how so-and-so looked “stunning” in a bikini at age fill-in-the-blank, or that Melania Trump broke the rules by reading to children without wearing a mask.

Tragic beyond belief that, thanks to the thieving Democrat Obama holdovers and their surrogate media, the masses never saw—or even suspected—that the Gulag was coming down the pike.

It will someday be the Irony of Ironies that In the fullness of time, all of those who bought into the visceral hatred of President Donald J. Trump will hate far more Every Day Life in the Gulag.

By that time, not a single soul trapped in the Gulag will be saying “Thanks for leaving us here”.

Meanwhile, the only way to never hear the horrible clank of the Gulag Gates behind you, is to defiantly refuse to go there.

Judi McLeod is an award-winning journalist with 30 years’ experience in the print media. A former Toronto Sun columnist, she also worked for the Kingston Whig Standard. Her work has appeared on Rush Limbaugh, Newsmax.com, Drudge Report, Foxnews.com.