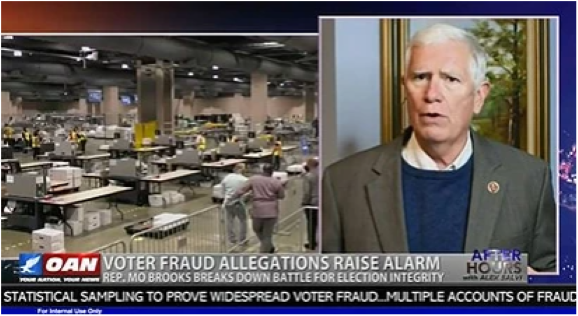 We say if any Senator wants the MAGA vote now or in the future, when Congress gathers to count the electoral votes on Jan. 6, they should join Rep. Brooks, and object to the slate of presidential electors from multiple states. With the support of a single senator, Brooks could disrupt the certification of the election and expose the massive election fraud by forcing both the House and Senate to debate and vote on the challenge.

Under federal law, a member of the House or Senate can contest the Electoral College results from any state, forcing the House and Senate to separate for up to two hours of debate and vote on whether to accept a slate of electors. A majority of both chambers would have to support the motion to successfully challenge a given slate of electors, according to a Congressional Research Service reported by ABC News.

“If the vote count was limited only to lawful votes cast by eligible American citizens, then Donald Trump won a majority of the Electoral College votes and was reelected to a second term,” Brooks said in an interview.

“It’s Congress’ responsibility to render the final verdict on all federal election contests, not the Supreme Court or any inferior court,” Brooks told ABC.

That means if a Senator joins Rep. Brooks Congress will be the final arbiter of the seating of Electors for Arizona, Georgia, Pennsylvania, Wisconsin, Michigan, Nevada and New Mexico.

In an appearance on CSPAN Rep. Brooks explained the process this way:

Rep. Brooks identified several states where the vote was so tainted by fraud Congress should intervene. And now the Trump Electors for Arizona, Georgia, Pennsylvania, Wisconsin, Michigan, Nevada and New Mexico have met to cast their votes and give him the support he needs to keep the challenge alive.

When asked why he was launching this rare, but not unprecedented challenge Rep. Brooks told the CSPAN audience:

“I can either surrender or fight to protect the integrity of our system. I’m choosing to fight. In my judgment, we have flaws with our election system that have resulted in millions of votes being cast in voter fraud… It is my teaching to protect our Republic and the underlying condition of any Republic is the right to vote and to have that vote accurately counted. Which only count lawful votes cast by eligible citizens and nobody else. That is clearly not happening in the United States [today].”

We agree with Rep. Brooks’ interpretation of the role Congress has as the final arbiter of all challenges to the seating of a state’s Electors and the counting of their votes, but for Rep. Brooks’ challenge to succeed two things must happen:

We constitutional conservatives must find a Senator with the same level of principled commitment to follow the Constitution that Rep. Mo Brooks is displaying. That means conservatives must call, email and visit their Republican Senators to demand that they object to the same slates of Electors to which Rep. Brooks objects.