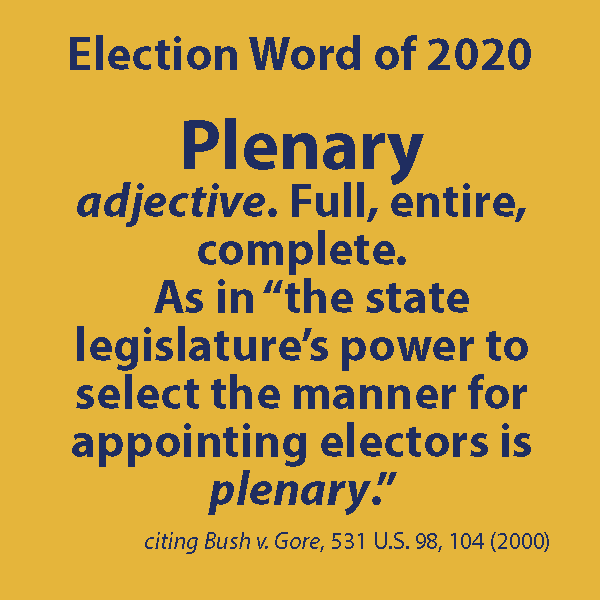 What is the meaning of the word ‘plenary’?

States under the Constitution Article II, Section 1, 2nd paragraph states: ‘Each state shall appoint in such manner as the Legislature thereof may direct…etc.’ This is stated in regard to the election of the President and the Vice-President.

In McPherson v. Blacker, rendered 10/17/1892, the Supreme Court gave in part in Item 18 of its Judgment the opinion on this topic as follows:

The constitution does not provide that the appointment of electors shall be by popular vote, nor that the electors shall be voted for upon a general ticket, nor that the majority of those who exercise the elective franchise can alone choose the electors. It recognizes that the people act through their representatives in the legislature, and leaves it to the legislature exclusively to define the method of effecting the object.

McPherson v. Blacker repeatedly in its Judgment document reaffirms the Plenary power of the State to appoint by the power of legislation the manner of selection of the Electors for President and Vice President.

So this is an exclusive, restricted absolute power of the States, with such designation constrained to this action.

Legislatures for about 100 years selected the President and Vice-President directly without a popular vote of the people.

Then this process was changed by legislation.

The reason the Supreme Court ruled in the Texas case the way they did is because no State may challenge the Plenary Power of another State under the Constitution.  It is plenary by definition and is not subject to the constraint of the Supreme Court or of other States. Therefore, there is no remedy and the entire motion is moot.

However, if these States use this power to commit acts which violate the Constitution by other means, such as the rights of individual citizens under the Equal Protection Clause, this condition is explicitly addressed under U.S. Code,  Title 10, Section 253 which reads in full as follows:

The President, by using the militia or the armed forces, or both, or by any other means, shall take such measures as he considers necessary to suppress, in a State, any insurrection, domestic violence, unlawful combination, or conspiracy, if it—

(1) so hinders the execution of the laws of that State, and of the United States within the State, that any part or class of its people is deprived of a right, privilege, immunity, or protection named in the Constitution and secured by law, and the constituted authorities of that State are unable, fail, or refuse to protect that right, privilege, or immunity, or to give that protection; or

(2) opposes or obstructs the execution of the laws of the United States or impedes the course of justice under those laws.

So, Number (1) of Section 253, Title 10 U.S. Code, shows clearly the remedy to the condition where a State conducts an election for any reason that violates the rights of individuals guaranteed under the Constitution and secured by law.

The Insurrection Act of 1807 is the remedy for our condition, but it cannot be invoked until the conditions of Section 252, Title 10 U.S. Code are fulfilled and one of these conditions is that when the enforcement of laws of the United States are not able to be enforced ‘by the ordinary course of judicial proceedings.’  This phrase also clearly places a requirement to be fulfilled prior to the invocation of this act and that requirement is that the ‘ordinary course of judicial proceedings,’ must have run its course and failed before this Act may be legally invoked.

Whenever the President considers that unlawful obstructions, combinations, or assemblages, or rebellion against the authority of the United States, make it impracticable to enforce the laws of the United States in any State by the ordinary course of judicial proceedings, he may call into Federal service such of the militia of any State, and use such of the armed forces, as he considers necessary to enforce those laws or to suppress the rebellion.

So this analysis clearly shows why the Supreme Court ruling in the Texas case was correct.

The issue of standing has already been repeatedly resolved by both the Constitution and precedent precedential ruling of the Supreme Court and cannot be heard of ruled upon as any remedy is moot.  Consequently, the entire action is moot.

The Court is clearly seeking a Petition and Complaint upon which it can render some sort of remedial action and this is not it.

An expedient response was appropriate to the time limited condition as the Court awaits an actionable submission.