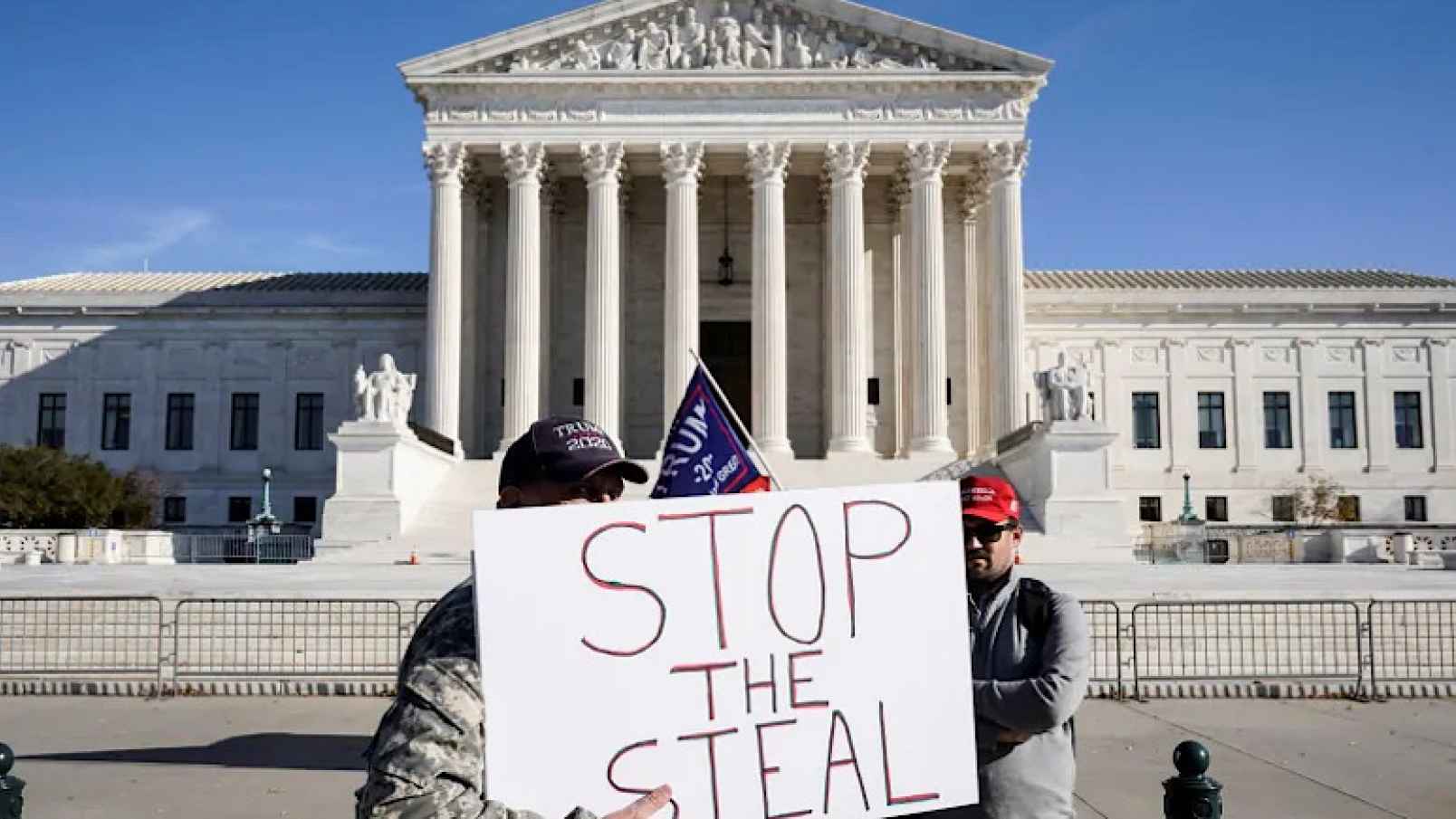 Compromised by the Left, can we ever trust the high court again?

President Donald Trump’s truly historic accomplishment of getting three Supreme Court justices confirmed so far hasn’t been enough to guarantee his election grievances get the high-profile official judicial airing they so richly deserve.

The justices are sworn to be impartial in the execution of their duty, but they are not blind. They got the message when Democrats threatened to pack the Supreme Court FDR-style. They saw the shock troops of the radical Left, Antifa and Black Lives Matter, burn down cities and lash out violently at Trump supporters.

The justices are human, after all.

“The Left is much better at making your life miserable when you anger them,” Curt Levey, president of the Committee for Justice, told this writer previously.

That the highest court in the land is now so paralyzed by fear of the Left that in Texas v. Pennsylvania, decided Dec. 11, it couldn’t even bring itself to hold a public hearing to discuss the issues involved, brings to mind a memorable phrase spoken by fictional African dictator Andre Baptiste, whose less-than-perfect grasp of English syntax was highlighted in the 2005 action movie, Lord of War.

As news spreads in 2000 that the Supreme Court had shut down the ballot-counting in disputed Florida, handing the presidency to George W. Bush, Baptiste indignantly tells his American arms supplier: “Have you seen the news? They accuse me of rigging elections, but after this in your Florida with your Supreme Court of kangaroos, now the U.S. must shut up forever.”

Unlike the new ruling, the decision in Bush v. Gore, or actually Gore v. Bush, was justified. That presidential election was only resolved when the Supreme Court found that the recount standards used at different locations in Florida were so wildly divergent that they violated voters’ equal-protection rights under the Fourteenth Amendment.

But the movie character’s phrase aptly describes what the Supreme Court has become over time.

More than a third of Americans believe the election was stolen from President Trump, according to a new Fox News poll. Among Trump voters, 77 percent believe he won the election, as do 26 percent of Independents and 10 percent of Democrats. Among those who believe Trump was cheated out of a second term, 85 percent want him to run again.

If Chief Justice John Roberts, a make-believe conservative, was the guardian of the Supreme Court as an institution that he thinks he is, he should have embraced the age-old legal saying that justice must not only be done, it must be seen to be done. As the Washington Post likes to lecture its readers in the Trump era, “Democracy dies in darkness.”

When 75 million Trump supporters believe their candidate was cheated, they’re entitled in a political sense to something, some kind of due process, some kind of day in court, an airing of grievances, even if in the end they lose.

To not even give them that, shows the greatest of contempt for the American people whose consent to be governed is the bedrock of our constitutional republic. This hatred of the common people is alive and well at the leftist bastions of Twitter, Facebook, Instagram, YouTube, and Google, which now as a matter of policy suppress free discussion of the legitimacy of this year’s presidential contest (and other topics of public importance such as COVID-19).

Political veteran Dick Morris believes the Supreme Court was intimidated by the Left into not doing its job.

“I believe the Supreme Court was sent a message by Joe Biden and Kamala Harris and the Democratic Party during the election. And the message was: ‘If you overturn this election, we will pack you, and make your court basically meaningless.’”

“And just ask yourself: Who raised the issue of court packing? We didn’t. Why would the Democrats raise an issue that was hurting them? We would never bring it up; we never thought of packing the court. They did.”

“It was a systemic effort, that succeeded, to intimidate the U.S. Supreme Court,” Morris concluded.

It is difficult to conclude otherwise, considering the truly enormous aggregation of evidence of wrongdoing in the four disputed battleground states.

It was Friday evening, days after Texas called upon the court to hear its election lawsuit by invoking the so-called original jurisdiction it possesses in disputes between states, the court –including Trump-appointed Justices Neil Gorsuch, Brett Kavanaugh, and Amy Coney Barrett—took the coward’s way out. They denied Texas standing in Texas v. Pennsylvania, possibly the last major lawsuit standing between the obviously senile Sinophile, former Vice President Joe Biden, and the presidency.

The argument advanced by Texas was straightforward.

“Finally, these same government officials flooded the Defendant States with millions of ballots to be sent through the mails, or placed in drop boxes, with little or no chain of custody and, at the same time, weakened the strongest security measures protecting the integrity of the vote—signature verification and witness requirements.”

Texas alleged that each of the states “flagrantly violated constitutional rules governing the appointment of presidential electors,” and “[i]n doing so, seeds of deep distrust have been sown across the country.”

It’s not like Texas didn’t have any credible evidence to show against the four battleground states that just barely went for basement-dwelling Biden who hardly conducted a campaign at all.

Expert statistical analysis determined, Texas stated in its filing, that “[t]he probability of former Vice President Biden winning the popular vote in the four Defendant States—Georgia, Michigan, Pennsylvania, and Wisconsin—independently given President Trump’s early lead in those States as of 3 a.m. on November 4, 2020, is less than one in a quadrillion, or 1 in 1,000,000,000,000,000.”

For Biden “to win these four States collectively, the odds of that event happening decrease to less than one in a quadrillion to the fourth power.”

The defendant states “also failed to segregate ballots in a manner that would permit accurate analysis to determine which ballots were cast in conformity with the legislatively set rules and which were not,” especially with respect to mail-in ballots.

“By waiving, lowering, and otherwise failing to follow the state statutory requirements for signature validation and other processes for ballot security, the entire body of such ballots is now constitutionally suspect and may not be legitimately used to determine allocation of the Defendant States’ presidential electors.”

There are mountains of evidence that Republican poll challengers were physically blocked and kicked out from counting rooms even when they possessed court orders guaranteeing their right to be present, and that “thousands of the same ballots [were] run multiple times through tabulators.” There is ample proof of the illegal backdating of ballots, that signature-verification protocols were ignored, and of counting of ballots in the absence of poll watchers and “mysterious late night dumps of thousands of ballots at tabulation centers.”

“In the spirit of Marbury v. Madison, this Court’s attention is profoundly needed to declare what the law is and to restore public trust in this election,” Texas stated in court papers.

“This case is no different.”

But with no public hearing, the court ruled:

“The State of Texas’s motion for leave to file a bill of complaint is denied for lack of standing under Article III of the Constitution. Texas has not demonstrated a judicially cognizable interest in the manner in which another State conducts its elections.”

President Donald Trump criticized the ruling the next day.

“The Supreme Court had ZERO interest in the merits of the greatest voter fraud ever perpetrated on the United States of America. All they were interested in is ‘standing,’ which makes it very difficult for the President to present a case on the merits. 75,000,000 votes!” he wrote on Twitter, which insultingly slapped a “This claim about election fraud is disputed” disclaimer on the tweet.

The court’s “facile statement” about standing “is an insult to Trump supporters,” Andrea Widburg writes at American Thinker.

“Standing’ is not a complicated concept,” she writes, citing Whitmore v. Arkansas (1990).

It requires a litigant to clearly demonstrate he has suffered an “injury in fact,” which “must be concrete in both a qualitative and temporal sense.” The litigant must allege an injury to himself that is “distinct and palpable,” not merely “abstract … and the alleged harm must be actual or imminent, not ‘conjectural’ or ‘hypothetical.’” The litigant must also show the injury “fairly can be traced to the challenged action” and “is likely to be redressed by a favorable decision.”

Since the court’s explanation is so brief, it is unclear how the justices –Samuel Alito and Clarence Thomas expressed disagreement at the decision not to allow the case to move forward— arrived at what otherwise appears to be a thoughtless, knee-jerk decision to shut down debate.

Texas wasn’t complaining about something minor, Widburg writes. It was arguing that Pennsylvania, Georgia, Michigan, and Wisconsin, “engaged in unconstitutional conduct to create the circumstances by which Democrat activists (and, possibly, foreign agents) could commit fraud in order to hand the election to Biden.”

“Understood the proper way, not only does Texas, in which Trump won, have a say in what those states did, so does every Trump voter in America.”

It cannot be disputed that the four defendant states “unconstitutionally changed their election laws through court action or settlement agreements. Additionally, in each defendant state, there is voluminous (and mostly uncontested) evidence that these rule changes allowed Democrats to engage in massive fraud to shift their citizens’ votes from Trump to Biden.”

Are these points really that hard to grasp?

Every American now has to wonder if justice was uppermost in the minds of the court’s members when they nixed Texas v. Pennsylvania.