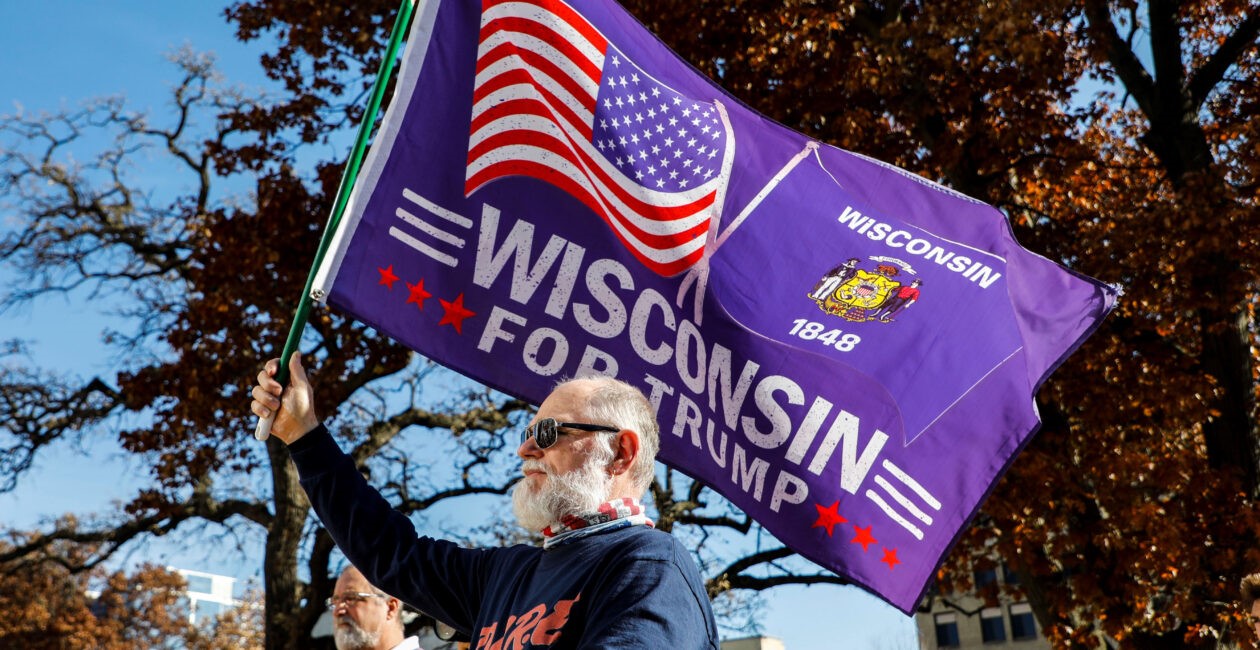 A state election official, meanwhile, assured the Wisconsin lawmakers that there is no evidence of widespread fraud.

These and other witnesses testified Friday before two committees of the Wisconsin Legislature that held a joint hearing on allegations of fraud and irregularities during the Nov. 3 election.

The hearing came as Wisconsin was one of four states—along with Georgia, Michigan, and Pennsylvania—sued by Texas and 18 other states that accuse them of violating their own state election laws. The U.S. Supreme Court, however, rejected the complaint Friday night, saying Texas had no legal standing.

The Wisconsin hearing also fell just three days before the Electoral College convenes Monday in state capitols across the country to vote for president based on the election results in their state.

However, Trump, who appears to have garnered 232 electoral votes, has not conceded the election.

Biden won a recount in the state. Late Friday, a Wisconsin judge rejected the Trump campaign’s challenge to the recount and certification of the vote. The campaign appealed to the Wisconsin Supreme Court, which CBS News reported was expected to hear arguments Saturday.

Democrats on the Wisconsin Legislature’s committees demanded early on that each witness should give sworn testimony. State Rep. Ron Tusler, a Republican and chairman of the Assembly committee, said that requiring witnesses to testify under oath is not something the panel normally does and he wouldn’t make this hearing an exception.

Here are four big highlights from the day of testimony at the Wisconsin Capitol before the state Assembly’s Committee on Campaigns and Elections and the state Senate’s Committee on Elections, Ethics, and Rural Issues.

Postal contract worker Ethan Pease said he wasn’t either a Trump or a Biden supporter, but voted for the Libertarian presidential candidate in November in what was only the second time he has voted.

Pease, who graduated high school in 2018, said he initially wanted to avoid getting in trouble after a U.S. Postal Service worker told him that ballots were being backdated. But he felt compelled to report it, he said.

Pease said he was surprised by what he saw and heard while working for United Mailing Services, a subcontractor to the Postal Service, in the months leading up to the election.

He started delivering mail-in ballots in September, he testified:

On one occasion, I forgot to retrieve the ballots for my nightly box truck run. Luckily, I had to take two trucks that night, so I got them on the second truck run. After that, I always made sure to get them because you don’t want to have to take a box truck to go all the way back for one cart and take it all the way back to the post office. It’s about a mile drive.

On Nov. 2, the day before Election Day, he saw just one ballot in the bin to pick up. On Election Day itself, he said, there were no ballots in the bin for delivery.

“The next day, Nov. 4, a senior USPS employee, whose name I do know, had asked me if I had forgotten any ballots the night before election night,” Pease told lawmakers, adding:

He explained to me that an order came down from the Wisconsin-Illinois chapter of USPS that 100,000 ballots were missing. He then told me that his post office, the one at Milwaukee Street in Madison, Wisconsin, had dispatched employees to look for the missing ballots around 4 a.m. Nov. 4. He said, and I quote, ‘around 4 a.m.,’ and that only seven or eight ballots were found at United Mailing Services, my work.

Based on my previous experience and habit of double-checking the ballots, I believed that to be a lie immediately.

On Nov. 5, Pease said, he talked to another Postal Service employee, who was not a supervisor:

She admitted that USPS employees were ordered to backdate ballots that were received too late to be lawfully counted. I asked this employee if I would be getting in trouble for those ballots the night before with my own boss, just kind of making sure that I was covered, because at first I did think perhaps I did miss ballots. But I couldn’t have if they were on the cart where they are supposed to be.

He said the postal employee responded: “No, I wouldn’t worry as long as they were postmarked for the third.”

“Then she hesitated for a moment and said, ‘That’s why they had us do that,’ referring to USPS employees.”

He said he didn’t tell USPS supervisors because they seemed to dislike Trump:

I’ve heard those same employees make jokes about asking customers who came into the post office lobby, ‘Who did you vote for? Oh, President Trump. OK.’ Then they would reference throwing the ballots directly into the trash.

I know that something wrong happened here and I just want to see that something gets done about it for our state and for the people of our state, so that people can have faith in our elections. … The bottom line to all of this is, why was the USPS even looking for ballots on Nov. 4 hours after the polls closed at 8 p.m. [Nov. 3].

2) No Evidence of ‘Large-Scale Voter Fraud’

“I have not seen credible evidence of large-scale voter fraud in Wisconsin during the November election,” Knudson told the legislators:

In Wisconsin, there were no dumps of ballots during the night. None. There is no evidence of any fraud related to Dominion Voting [Systems] or any other machines in Wisconsin. None. The counting in Wisconsin did not stop and restart. Election observers were allowed to be present throughout the Election Day and election night proceedings. …

There has been no credible evidence presented to the Elections Commission that any of these problems occurred in Wisconsin. During this pandemic, Wisconsin successfully conducted elections in April, May, August, and November. We were the first to show how in-person voting could be safely conducted during this pandemic.

However, Knudson said that the way a large number of votes were counted so late at night understandably raised suspicion when it seemed the state flipped from Trump to Biden. He said:

This system was fatally flawed. On election night 2020, Biden surged ahead of Trump when the Milwaukee absentee votes were reported in the early morning hours. This time, that delay caused more than confusion. It destroyed confidence in our election, creating suspicion, wiping out trust in our elections. Election night reporting should never be allowed to happen this way again.

It’s more effective than bringing the complaint to a district attorney to prosecute, he added.

“You can file it with the DA. The truth is they will seldom prosecute someone over this. It happens from time to time,” Knudson said. “They don’t see it rising to be worthy of their time. If you would gather a series of those and turn them into the Elections Commission, the commission could gather a group of those and it would carry more weight going to court.”

Dan O’Donnell, a Wisconsin talk radio host, told the lawmakers that he had been investigating absentee ballots from nursing homes for several months. O’Donnell related several anecdotes, which he said he got from family members of older residents.

One woman he identified as Susan said her mother told her: “I really wanted to vote for Trump.”

However, he said, a staff member at the nursing home told Susan: “No, no, he’s a bad man. We are voting for Biden.”

“The staff member instructed her to vote for Biden, so she did, but she wasn’t happy about it. None of us should be happy about this,” O’Donnell told the lawmakers. “These are severely cognitively and developmentally impaired people who rely on their caregivers for everything. But those caregivers have betrayed their trust.”

O’Donnell gave several other examples, asserting, “This has happened over and over and over here in Wisconsin at assisted living facilities and nursing homes across the state.”

He said “Ethel,” a pseudonym because her family fears retribution for coming forward, was 95 and died in a nursing home in October after struggling with dementia.

“She’s been voting absentee for years even though she has not been mentally competent enough to since at least 2012,” O’Donnell said, attributing this to Ethel’s daughter, whom he identified as Janet. “In fact, as her mental state deteriorated, her voting became more regular. How could this be? Janet has filed a police report with her local law enforcement agency and under penalty of obstruction of justice.”

He read a sworn statement from the daughter, in which she says: “Mom could sometimes not recognize me, remember what her last meal was, or even what day it was, and she voted.”

Even though Ethel died in October, her vote for president was counted, O’Donnell said.

I inquired who had requested a ballot for her and had access to her to assist in filling out the ballot for her, as I have not been able to visit her personally for months. They never gave me an answer on how she received a ballot.

Another witness focused on large donations from the Center for Tech and Civic Life, a nonprofit primarily funded by Facebook co-founder and CEO Mark Zuckerberg and his wife Priscilla Chan, who gave $350 million to the project.

The center spent more than $6 million in Wisconsin for improved election administration, according to litigation by the Amistad Project, an initiative of the Thomas More Society, a conservative legal group.

“You can’t privatize elections,” he added, and the government should not put its thumb on the scale.

The problem was similar in Wisconsin, Kline said, adding:

You can’t treat persons or groups differently, despite identity politics and cancel culture. Our rights are intrinsic, not offered by you. They are being protected by you. When government gets in the game through Mr. Zuckerberg’s funds, of treating different groups of people differently, it violates a basic tenet of American law that we all should hold fast to as a protection of individual liberty.

In a public statement in October, Zuckerberg defended the spending on election administration, saying he isn’t opposed to government funding elections but that such funding isn’t adequate.

“Since our initial donation, there have been multiple lawsuits filed in an attempt to block these funds from being used, based on claims that the organizations receiving donations have a partisan agenda. That’s false,” Zuckerberg’s post says. “These funds will serve communities throughout the country—urban, rural and suburban–and are being allocated by non-partisan organizations.”