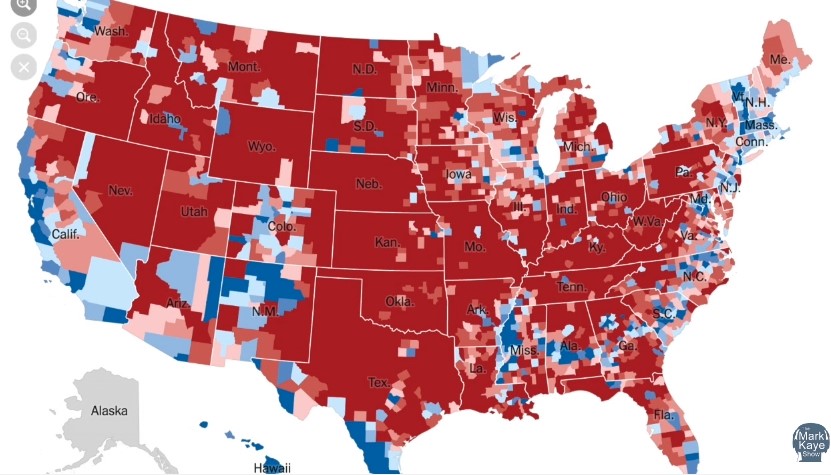 Too many Americans who never had a civics class are learning about the Electoral College, which they are coming to realize may be James Madison’s “Do-Over Button” for times just like these.  (If you are under 35, Madison was a president a long time ago.)

The Electoral College is the last chance to stop a presidential election from going off a cliff.  Let’s take some examples.

What if the presidential candidate of a leading party were caught taking bribes from an American enemy and that was learned after the vote counting began?  What if his son delivered prima facie evidence, and a witness stepped forward weeks before the election and the media suppressed it so the voters never heard a word?  What if a candidate were in early stage dementia and his party and the media hid it?

What if millions of American voices were suppressed utilizing social media, so only the voices of one party were allowed to speak?

Oh my gosh!  How could such things happen?

The Electoral College has a “do-over button.”  States fail to certify the vote, and Congress decides.  Remember, Congress is the house of the people — Nancy Pelosi notwithstanding.

Madison and his pals actually thought that through over two hundred years ago, no kidding.

It applies only to the presidential vote, not to senators or representatives.  The Founders knew how important it was to get the executive thing right.

So just how do we make a case to the Electoral College that massive voter fraud, on an industrial scale, thwarted the will of the American people?

Well, there are ways that will not work.  One of them is the long, slow slog through interminable, dusty election precincts, counting one vote here, a dead guy who voted over there, three ballots where the local team filled out the missing fields.  That is the loser road.

Fraud at an industrial level is not a new thing.  It happens every day.

I recall when our fraud team met with the CEO of one of the world’s largest insurance companies.  You know them.  In our presentation, with his fraud team present, we showed the record of a doctor to whom they paid over a hundred grand a year, for almost a decade, for insurance medical bills.

Their fraud inspectors sat confidently at the long table.  They said “…yeah, we know him, he’s clean.”

In our next slide, we showed that the address where they were sending checks was a federal prison where he had been incarcerated for years.

Our team built the fraud engine for the largest online auction house.  You may have used it.  We uncovered industrial fraud at most of the top 10 property and casualty insurers.  We did this with big data analysis.

What’s that, you say?  Well, take a look at Andrea Widburg’s story.

The video explaining big data is a little complicated.  Watch it a couple of times.  It is college level statistics, so you will get it, I promise.

Here’s the summary:  For the election returns in many precincts to happen the way they did, Biden would have to flip a coin 1,000 times and get heads every time.  We aren’t done here.

He would also have to do it over and over again, in scores, perhaps hundreds of precincts.

Industrial fraud is always discovered with statistical analysis like Andrea’s subjects do quite well in this video.  Industrial fraud is pretty cool because from the outside, it is invisible.  Remember the doctor getting paid in prison, above.

When subject to statistical analysis against known patterns, industrial fraud stands out like a dinosaur walking through a field of peanut butter.  It is unmistakable.

Is such analysis proof?

Yes, it is proof that there is an anomaly of such proportions that it must be investigated.  And this isn’t hard.  Remember, all the data you need to do the analysis is after-the-fact voting data.  You do not need to see a single ballot.

Like Andrea’s subjects, you just need to know that in precinct after precinct, there is an unmistakable pattern that the more people vote for Trump over Biden the greater the number of Trump votes the counting machines scoop from Trump to Biden.

The pattern is one that can only be done by machines, like a computer.  There are too many transactions, with too straight a line, across too many precincts, to be the guys with the ballot boxes arriving in the middle of the night.  They are extra fraud.

Industrial fraud must then be summarized in a picture or two that anyone, even a state legislator, can understand.  No matter its strength, it will not be understood by Fox News.  In the video noted above, the authors get pretty close.

Using big data, measuring against historical trends, enables many of the math geeks who inhabit the internet to find these frauds.  Andrea’s boys did a good job but there will be many more.  They will all find the same thing – industrial-scale voter fraud.

This isn’t going away and there is much more to find.

The magic is to craft the picture so that anyone but Fox News can understand it.

That forces our state legislators in the six battleground states to hit Madison’s “do-over button” and let Congress decide.

There may not be enough time to crawl through every vote by hand, but big data analysis will find that dinosaur in the peanut butter, show it to the most recalcitrant state senator and reveal this election to be the fraud it clearly is.

Read more at: AmericanThinker.com and VoteFraud.news.