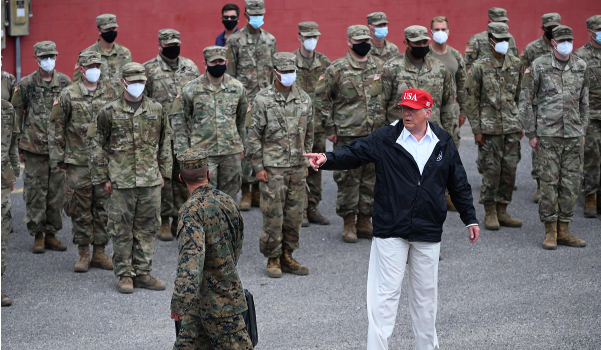 General Michael Flynn is calling for an “intervention” of the military kind. He terrorized the Deep State spooks who tried to frame him with a tweet on Tuesday afternoon. “Freedom never kneels except for God.” It was attached to a press release put out by an offshoot of the Ohio Tea Party calling for the military to take charge of an election “do-over.” Unfortunately, “we are at the point where we can only trust our military to do this because our corrupt political class and courts have proven their inability to act fairly and within the law.”

America overdue for an ‘intervention’

America, General Michael Flynn agrees, is overdue for an “intervention.” Military style. He saw a press release put out by a Tea Party offshoot group in Akron, Ohio, and simply had to give the idea his seal of approval.

The idea is wonderful, most patriots agree, except there’s no need to limit the scope of the action. The United States Government is ripe for a major housecleaning. It’s coming, one way or another. It can be orderly and peaceful or it can be bloody.

You can thank patriot Tom Zawistowski for having the courage to take out a full page ad in the Washington Times to say things that the mainstream media has been desperately trying to censor.

Military intervention has become necessary to prevent the bloody civil war looming ominously on the horizon. The Op-ed demands “that President Trump Invoke limited martial law in order to allow the U.S. Military to oversee a new free and fair federal election if Legislators, Courts and the Congress do not follow the Constitution.”

The time to act is now. “There is no doubt that this attempted stealing of these elections” is a “case of rebellion,” the group states. In fact, “a clear, flagrant, and gigantic case of rebellion that requires exercising extraordinary authority to preserve our Union.”

Without intervention the nation is doomed. “It is OUR EXCLUSIVE RIGHT to elect our President and that sacred right has been infringed by the massive, planned, illegal election fraud conducted by corrupt Democrat/Socialist Party operatives across our nation to steal our vote. We will NOT stand for it.” 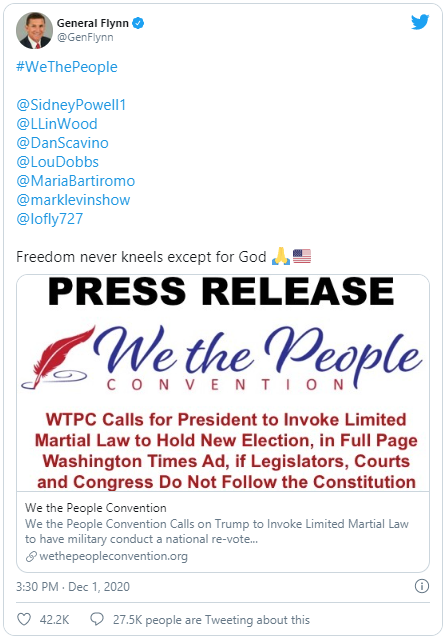 While the group calls for a limited military intervention targeted directly on re-creating the flawed election, they also make a strong case for general martial law to drain the swamp of evil corruption.

Patriots from coast-to-coast are all for it and standing by. As in the day of Abraham Lincoln, “a President with courage and determination was needed to preserve the Union.” The group notes, “the current threat to our United States by the international and domestic socialist/communist left is much more serious than anything Lincoln or our nation has faced in its history – including the civil war.”

Without a military intervention there will be a civil war. The sides have become far too polarized. “We have well-funded, armed and trained Marxists in ANTIFA and BLM strategically positioned in our major cities acting openly with violence to silence opposition to their anti-American agenda.”

Everyone from the Proud Boys to the Oathkeepers are getting ready to Boogie Woogie with the rabble army raised by George Soros and his globalist sponsors. Our elected officials have sold out and seditiously turned traitor.

“Elected officials in Democrat/Socialist-controlled cities” are “openly encouraging this planned violence against civilians and businesses.”

When one side wants to “defund the police,” and gets away with it, the other side steps up to fill the law enforcement gap. Without professional intervention from the military, under the command of President Donald Trump, there will be chaos and open warfare in the streets of America.

Right now, the group declares, “we are literally under attack from within!” There is no doubt, they conclude, It is time for everyone who swore an oath to “defend the Constitution of the United States against all enemies, foreign and domestic,” to act upon it. “Failure to do so could result in massive violence and destruction on a level not seen since the Civil War.”