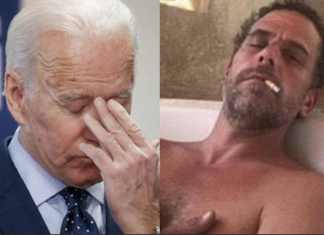 Senator Grassley sent a letter to Attorney General William Barr in early November of this year. The Senator demanded information about Hunter Biden’s connections to an energy company that was linked to the Chinese Communist Party and military. He wanted answers by late November.

You need to know how your government is looking out for you. Based on this letter, it’s shockingly little.

Grassley was concerned about those suspect relationships that operate outside of FARA.

Sometimes, however, certain relationships appear to operate outside of FARA’s transparency requirements and spirit. For example, based on recently released emails, texts, and my recent report with Senator Johnson on conflicts of interest relating to Hunt Biden’s financial activities and those of his business associates, it appears that he and his uncle, James Biden, had significant connections to CEFC China Energy Co. Ltd. (CEFC).”

“The records also show that CEFC was an extension of the Chinese government and that CEFC intended to alter U.S. policy and public opinion to its benefit and that the Chinese government would be the principal beneficiary of those actions. The apparent relationships came to light not through proper FARA registration but only through the work of my oversight activities and through recent media revelations.

You might remember that a business associate of Hunter Biden’s, Patrick Ho, was sentenced in early 2019 to three years in prison for bribery and money laundering in connection with his work on behalf of CEFC.

The letter states further, and most alarmingly, that CEFC is tied to China’s military:

Recently released emails relating to Hunter Biden, James Biden, and their business associates show their close financial and business relationship with CEFC and Ye Jianming. Ye Jianming is a Chinese national, chairman of CEFC, and a frequent figure in Hunter Biden’s financial dealings in China. Based on public reports that were available in 2015, when his contact with Hunter Biden began to ramp up, Ye was a founder of CEFC and chairman of the board for its subsidiary, the China Energy Fund Committee.

Although CEFC reportedly remained a private company until state-owned enterprises assumed control of it in 2018, reporting in 2017 indicated that it received financing from the China Development Bank, “hir a number of former top officials from state-owned energy companies,” and had “layers of Communist Party committees across its subsidiaries — more than at many private Chinese companies.”

My recent report with Senator Johnson also showed that Ye had connections not just to the communist party in China, but also China’s People’s Liberation Army, the armed forces of the Chinese communist party.

The letter indicates that Hunter and James Biden acted as agents of the Chinese Communist Party:

Those records also make clear that CEFC was an extension of the communist Chinese government:

Based on the information acquired to date, CEFC was controlled by a foreign government, received financial support therefrom, and may have engaged in an activity to influence the U.S. Government and public for the benefit of the communist Chinese government.

Accordingly, the actions by Hunter Biden and James Biden on behalf of CEFC, Ye Jianming, and other officers connected to CEFC, potentially make them agents of the Chinese government for purposes of longstanding public disclosure laws. The American public deserves to know when foreign entities are operating in and attempting to influence U.S. policy and public opinion.

Senator Grassley wants to know Barr’s opinion and what he’s doing about it.

This was all known before the election, and everyone who tried to report on it was silenced. 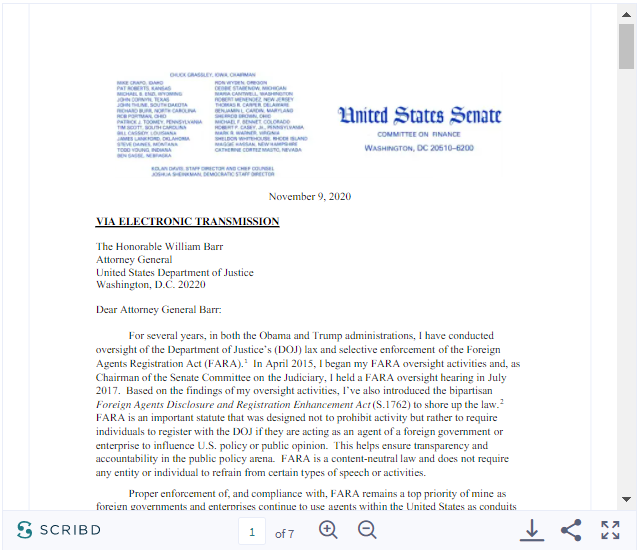