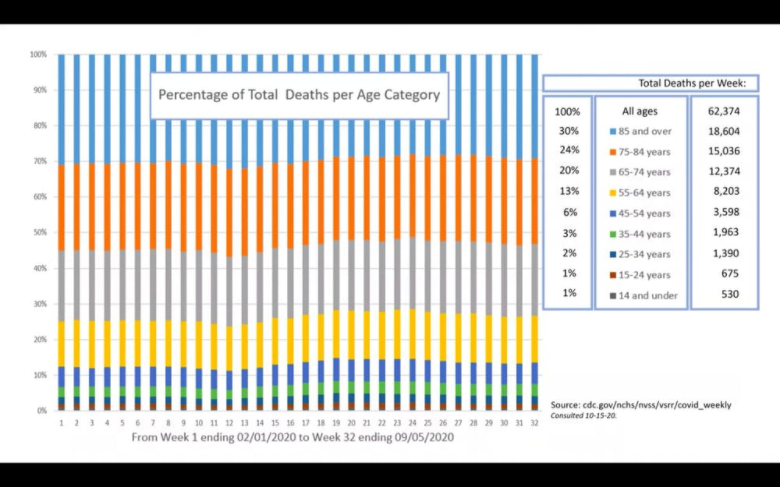 Conventional wisdom is that COVID-19 has caused thousands of deaths in the United States and nearly 1.5 million worldwide. This perception was directly challenged by an article published by Johns Hopkins University (JHU) on November 22. The article was later retracted because it “was being used to support false and dangerous inaccuracies about the impact of the pandemic,” according to JHU.

Genevieve Briand, assistant program director of the Applied Economics master’s degree program at Johns Hopkins University, critically analyzed the impact that COVID-19 had on U.S. deaths. According to Briand, the impact of COVID-19 on deaths in the United States can be fully understood by comparing it to the number of total deaths in the country.

The article claimed that “in contrast to most people’s assumptions, the number of deaths by COVID-19 is not alarming. In fact, it has relatively no effect on deaths in the United States.”

That’s what it says.  And, it should come as no surprise that the article was retracted within days.

Luckily, a back-up copy remains on The Wayback Machine, and we can still read it.

So, how exactly did conclude that COVID-19 has had “relatively no effect on deaths”? Here’s how the study made this determination:

After retrieving data on the CDC website, Briand compiled a graph representing percentages of total deaths per age category from early February to early September, which includes the period from before COVID-19 was detected in the U.S. to after infection rates soared.

Surprisingly, the deaths of older people stayed the same before and after COVID-19. Since COVID-19 mainly affects the elderly, experts expected an increase in the percentage of deaths in older age groups. However, this increase is not seen from the CDC data. In fact, the percentages of deaths among all age groups remain relatively the same.

Briand’s analysis found that the range of deaths amongst the older population has remained within the range of past years.

So, if COVID-19 has actually had no significant impact on U.S. deaths, why does it not appear that way?

“This is true every year,” explained Briand. “Every year in the U.S. when we observe the seasonal ups and downs, we have an increase of deaths due to all causes.”

Here’s where things get interesting.

Briand concludes that the COVID-19 death toll in the United States is misleading and that deaths from other diseases are being categorized as COVID-19 deaths.

There have been reports of inflated COVID-19 deaths numbers for months. Patients who never tested positive for the disease had COVID-19 as their cause of death on their death certificates. In May, Jared Polis, the Democrat governor of Colorado, disputed official coronavirus death counts, saying even those of the Centers for Disease Control and Prevention (CDC) were inflated as the result of including people who tested positive for the coronavirus but died of other causes. In July, a fatal motorcycle accident victim was listed as a COVID-19 death.

On Thursday, Johns Hopkins University explained that they deleted the article because it “was being used to support false and dangerous inaccuracies about the impact of the pandemic.” 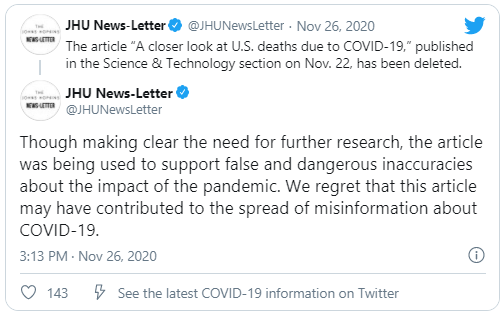 Marvis Gutierrez and Ariella Shua, the managing editors of the JHU newsletter, assured Lead Stories that the article/study was not censored. “The article in question was retracted last night, as it was being used to spread misinformation about the pandemic. We have preserved the article as a PDF and posted an Editor’s Note: with full clarification about our decision, highlighting the inaccuracies of the study…We were not censored, but decided to retract the article based on the reasons outlined in the Editor’s Note.”

The author of the article on Briand’s claims, Yanni Gu, responding to the article being pulled, posted the following on LinkedIn: 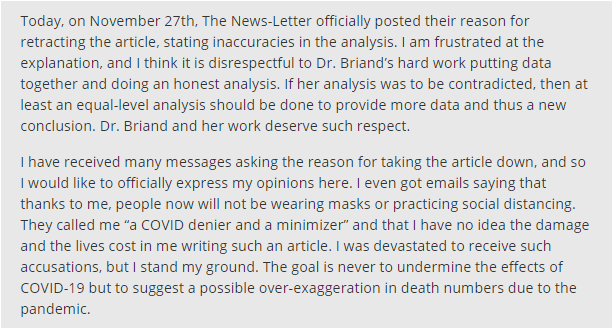 Today, on November 27th, The News-Letter officially posted their reason for retracting the article, stating inaccuracies in the analysis. I am frustrated at the explanation, and I think it is disrespectful to Dr. Briand’s hard work putting data together and doing an honest analysis. If her analysis was to be contradicted, then at least an equal-level analysis should be done to provide more data and thus a new conclusion. Dr. Briand and her work deserve such respect.

I have received many messages asking the reason for taking the article down, and so I would like to officially express my opinions here. I even got emails saying that thanks to me, people now will not be wearing masks or practicing social distancing. They called me “a COVID denier and a minimizer” and that I have no idea the damage and the lives cost in me writing such an article. I was devastated to receive such accusations, but I stand my ground. The goal is never to undermine the effects of COVID-19 but to suggest a possible over-exaggeration in death numbers due to the pandemic.

Professor Briand also responded to the pulling of the article, saying “Their decision to retract the article was their own. Yanni Gu did an excellent at reporting the content of the presentation. The full presentation is available at: Covid-19 Deaths: A Look at U.S. Data – YouTube. I explain during the presentation where I found and downloaded the data from, so anyone can easily replicate my analysis.”

UPDATE: Robert Anderson, chief of the Mortality Statistics Branch of the National Center for Health Statistics, also disputes Briand’s analysis. According to Anderson, Briand didn’t account for seasonal changes in deaths. “In the spring of 2020, during a period where we normally should be seeing declining mortality, deaths continued to increase and were at unusually high levels through the spring,” he told Lead Stories. “So, the comparison of the most lethal weeks in 2018 with the most lethal weeks of 2020 is not appropriate.”

“In 2018, deaths followed the normal pattern (although at a higher level than normal). In 2020, deaths did not follow the normal pattern…they should have been declining in the spring, but instead increased substantially,” Anderson added.

Matt Margolis is the author of the new book Airborne: How The Liberal Media Weaponized The Coronavirus Against Donald Trump, and the bestselling book The Worst President in History: The Legacy of Barack Obama. You can follow Matt on Twitter @MattMargolis