Hoping Joe Biden will be certified and selected president of the United States, Big Tech ramps up its censorship of Republicans, conservatives, and Christians even more, and the Democrat media is pulling out all the stops in what they believe is the final month of the Trump administration.

The media keeps lying as Big Tech continues suppressing the free speech of those not towing the liberal party line. Surveys now show there’s indisputable proof that Democrat voters were clueless about actual Biden corruption scandals, and President Trump has been censored hundreds of times now on Twitter alone.

While Trump administration attorneys work on challenging the validity of bizarre vote tallying, anyone interested in free and fair elections should seriously take a closer look at the role of Big Tech.

While liberal media activists are currently talking about Joe Biden’s dogs, his broken foot, and the wonderful cabinet appointments he is making, the old joker has yet to be censored, flagged, or suppressed on any social platform.

What does this tell you? It’s not only the Democrat media mob that refuses to serve all Americans; Big Tech is also complicit. I agree with those who say today’s mainstream media are now enemy combatants and the battle field is information and technology.

According to the Media Research Center, Twitter has censored the Trump campaign 325 times, but never once did they censor Biden. And they didn’t stop after the election. Through Thanksgiving, they worked feverishly to flag and suppress tweets from Trump and his campaign.

Since November 23, Twitter slapped labels on 63 Trump tweets including this one:

“Big Tech and the Fake News Media have partnered to Suppress. Freedom of the Press is gone, a thing of the past. That’s why they refuse to report the real facts and figures of the 2020 Election or even, where’s Hunter!”

Washington Times columnist, Robert Knight points out that Google accounts for more than 90 percent of Internet searches which can easily determine elections by adjusting algorithms to favor the Democrat Party. In his new column “The Digital Election Heist,” he writes:

He also refers to behavioral psychologist Robert Epstein who has even warned the U.S. Congress about Google’s search algorithm that can shift the voting preferences of undecided voters. They even have a name for the process: Search Engine Manipulation Effect (SEME) and explained how it works.

The bottom line is they are doing this without anyone knowing it because search ranking bias can be masked so that people have no awareness of the manipulation.

Just over a week ago, Mr. Epstein told Tucker Carlson on Fox News that he believed the SEME technique had cost President Trump a “bare minimum” of at least six million votes. How does he know this?

He said he had 733 field agents in three swing states – Arizona, Florida, and North Carolina – and that his team recorded discrepancies such as voting reminders sent only to liberals on Google’s home page. Not a single field agent received a reminder so he blew the whistle on the big tech giant who then began sending reminders to everyone.

A month ago, Mr. Epstein told Carlson that “just based on the first 150,000 searches that we’ve looked at, and that’s about 1.5 million search results and over a million web pages, we’re finding very substantial pro-liberal bias in all 10 or at least nine out of 10 search results on the first page of Google search results.

In another election twist, since there was an unprecedented amount of early voting, the damage could have already been done. Out of 156.8 million, more than 100 million ballots were cast before Election Day. We were warned.

But for those who voted in person, it won’t surprise anyone that many Joe Biden voters get their information from CNN, MSNBC, and progressive social media sites. So it also shouldn’t surprise us that on every major news story, Biden, Harris voters who used these sources were misinformed or in the dark about key issues.

Voters surveyed in seven swing states were asked what they knew about some top news stories leading up to the presidential election. Ready? 82% of Biden voters had no idea about at least one of the major news stories. But listen to this: one out of every six (17%) Democrat voters said had they known about these stories, they would not have voted for Joe Biden!

For those keeping score at home, aside from voter fraud and cheating, this alone would have shifted the election outcome and Trump would have won a second term. Easily.

What stories did the survey ask Biden voters about?

First, they were kept in the dark about the documented Hunter Biden scandal with China and the Ukraine, the Joe Biden sexual assault cases including his former employee, Tara Reade
; and the fact Kamala Harris is the most liberal, leftist U.S. Senator in history.

Second, they were clueless about five positive Trump news items including the record 33% economic growth he presided over, U.S. Energy Independence, Trump admin. Middle-East peace deals resulting in his Nobel Peace prize nominations, the fact Trump created a record-breaking 11 million new jobs between May and October, and finally, Biden Harris voters did not know about Operation Warp Speed success with COVID vaccines and treatments.

We no longer have a free republic when the nation is subject to a one-party national press and every major social media and tech company is run by liberal Democrats. It is imperative we find new alternatives and raise awareness.

Mainstream media Democrats spent four years attacking and lying about the president with 93% of their so-called ‘reporting’ negative. If one of Trump’s sons was involved in a major corruption scandal, don’t you think every media outlet would be all over it?

Of course. The enemies of God and America worked constantly to hide bad news about Joe Biden, how radical Kamala Harris is and the truth about their policies; and they hid or ignored good news about Donald Trump. Without their bias, fraud, and manipulation, elections wouldn’t even be close.

And now, millions of Americans are being told to move on? Just accept the disputed results, work together, and forget about it all. But we can’t give up without a fight.

Stay informed, friends. Check your news sources. Email and message others. Use the phone or texting. I’ve personally been flagged, suppressed, and shadow-banned on at least three social media accounts, and this video with accompanying article will probably have limited visibility, but for those who get it, please share!

God is in control so keep the faith. Pray for truth, justice, and that we somehow get back to having freedom of speech in America for all people. Contact state representatives and do what you can. This is no time to wave the white flag.https://www.newsbusters.org/blogs/techwatch/corinne-weaver/2020/11/30/twitter-censors-trump-trump-campaign-325-times-never 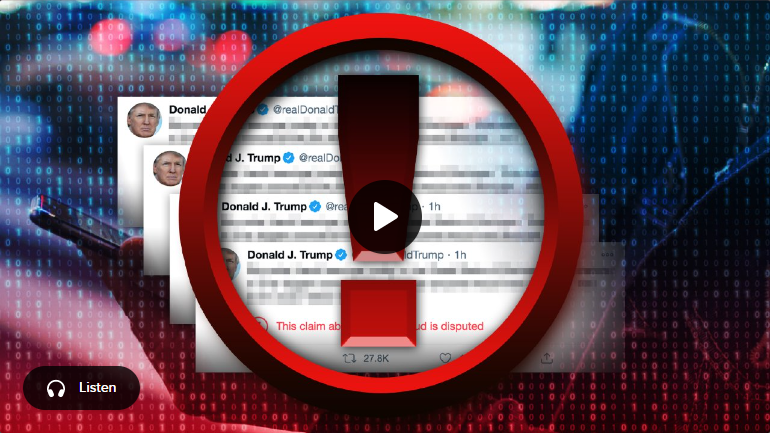