Unmask and Be Free 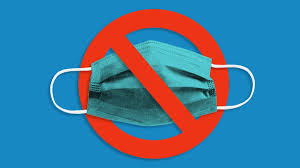 Unmask and Be Free

Will Refusal To Wear A Mask Soon Be Considered An Extension Of Free Speech, Or Will It Be Punished?

The political left, and that includes most Democrats, is good at inventing ways of exercising the Constitutional second amendment right of free speech, but will they allow Americans to be maskless and permit the rejection of the mask to be considered an act of free speech protected under the constitution? Most likely, not.

In football, NFL players can take a knee and they’re praised for speaking their mind via their actions, but if Americans want freedom from the hideous facial mask and its Bonnie and Clyde stylishness, will the Biden administration permit these citizens the constitutional liberty to breathe feely and not punish them, or will mask deniers go to jail for their offense against the party of the Nazi mask?

The political left will quickly accuse a mask denier of attempted murder for not wearing a mask, or at least he’ll be accused of attempting to infect those people around him, people that he may come into contact with as he goes about his personal business. If masks are one-hundred percent effective in blocking the virus and protecting the wearer, then why do people who choose to not wear a mask have to wear one? How can your maskless face infect another person if they are wearing their own mask, which all good Democrats do, assuming that masks work as well as the political left asserts they do?

Of course Democrats will not allow anyone who is not wearing a mask to be considered exercising free speech. They will call it subversion and an attack on big, intrusive government’s power to protect the American people from the pandemic, and they’ll punish the denier for their resistance to Democrat rule and for carelessly risking the death of all who come into contact with them as they pass their day.

We are constantly reminded of the Democrats’ cynical motto of “Do as I say, Not as I do“, so be ready for punishment if you take the constitution seriously and make an attempt to be free once more.

Unmask and be free