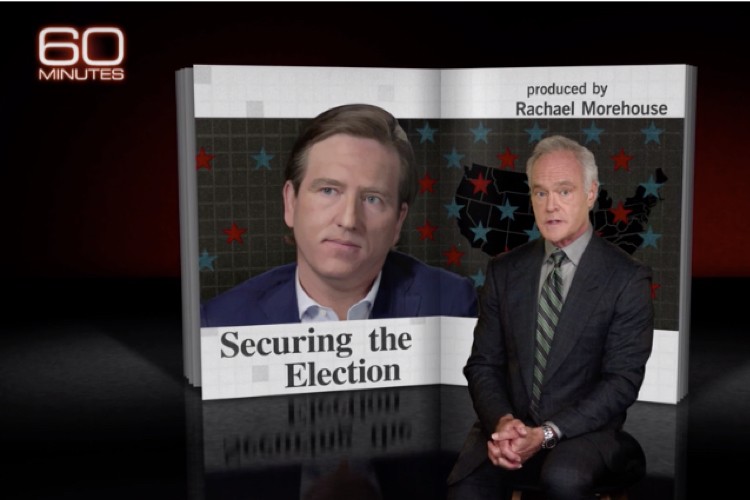 Image of Chris Krebs (in inset): Screenshot of 60 Minutes video

Chris Krebs, the recently fired head of the federal Cybersecurity and Infrastructure Security Agency (CISA), is an example par excellence of the breadth and depth of the Deep State swamp. Not surprisingly, his deputy at CISA, Matt Travis, resigned on November 20, three days after Krebs’ dismissal. Krebs and Travis go back a long way together as business partners in the shadowy world of intelligence, government contracts, lobbying, and consulting. They have close ties to many of the virulently anti-Trump swamp creatures, including disgraced former Director of National Intelligence (DNI) James Clapper and former Department of Homeland Security head Michael Chertoff. They also have connections to Dominion Voting Systems, which is at the center of our current election controversies.

Chris Krebs: The Man vs. the Media’s Fake Image

In short, there is good reason to question the image of Chris Krebs as a just-the-facts, impartial, non-partisan public servant, as we detail below. But that hasn’t prevented him from becoming the latest darling of the hate-Trump media. For the past few days, he’s been all over the news again, blasting President Trump and Trump supporters for daring to state the obvious, that the recent elections were rife with fraud. CBS’s 60 Minutes, NPR, CNN, ABC, NBC, the Washington Post, Yahoo News, etc. — the entire Fake News chorus — can’t seem to get enough of him.

On November 12, as The New American previously reported, Krebs’ agency issued a statement calling the November 3 election “the most secure in American history.” “There is no evidence that any voting system deleted or lost votes, changed votes, or was in any way compromised,” the statement continued.

In what was then an obvious slam of President Trump and all others who refuse to turn a blind eye to the massive, blatant fraud during the election, the CISA statement went on to declare: “While we know there are many unfounded claims and opportunities for misinformation about the process of our elections, we can assure you we have the utmost confidence in the security and integrity of our elections, and you should too.”

The so-called “fact checkers” of Big Media, along with anti-Trump Democrats and Never Trump Republicans, immediately and repeatedly cited Chris Krebs as the ultimate authority on the integrity of the elections, thus supposedly canceling out Trump’s claims of skullduggery.

Krebs Had No Authority; Fraud Detection Not CISA’s job

President Trump fired Krebs in November, and with good reason. First of all, as pointed out by TheFederalist.com, neither Krebs nor anyone else at CISA have any authority or competency to address the issue of election fraud. CISA is a new agency underneath the Department of Homeland Security (DHS), created two years ago by an act of Congress that was signed by President Trump on November 16, 2018.

It was directed primarily at hardening election infrastructure against foreign interference, following the two-year-long agitation over the false charges of Russian interference in favor of Donald Trump in the 2016 election. The issue of election fraud is “beyond the scope” of the authority given to CISA and Krebs. It is an issue that falls within the purview of the individual states and the federal Justice Department.

“Election fraud is different than election interference and is beyond the scope of CISA authorities,” a DHS official told The Federalist. “CISA does not have firsthand information on allegations of voting fraud or investigate such claims, responsibility for which lies with State and local authorities and the Department of Justice.”

“Each state is responsible for the execution of its own elections.  Not CISA and not the federal government,” the DHS official said. “Allegations of voter fraud are being adjudicated through the court system.”

Krebs even admitted in a November 18 tweet that election fraud is “not CISA’s job.”

Krebs’ assertion that “I never claimed there wasn’t fraud in the election” flies in the face of his CISA statement quoted earlier and his subsequent statements that have been used by the media and Trump critics to “prove” that election-fraud charges are Trump fantasies.

However, even though he has admitted that he had no jurisdiction or competence over election fraud issues, he has not refrained from pursuing the matter in the Biden-friendly media.

Beyond the fact that Chris Krebs is far from being the “last word” on the massive 2020 election fraud, there is the issue of his tainted ties to some of President Trump’s most vociferous foes. It is a tangled web of multiple insider companies involved in intelligence and military contracting, consulting, and lobbying. Denizens of this web rotate in and out of government and corporate posts. Here are a few examples:

Other Krebs loyalists at DHS/CISA who recently either resigned or were fired include Bryan Ware and Brian Harrell. Unfortunately, there still remain many subversive “resisters” burrowed into the infrastructure.

The Krebs-Travis episode at CISA is one of many that illustrate the enormous problem President Trump has faced with thousands of Bush-Obama “Resistance” operatives at DHS, DOJ, DOD, CIA, FBI, and throughout the federal bureaucracy. Federal judges have made it difficult to drain the swamp with mass firings, repeatedly ruling against the president (see here and here).

There’s much more, but this should give a hint that the reality of Chris Krebs’ sudden rise to fame differs greatly from the media-fabricated narrative that he is a heroic patriot who is speaking truth to power. 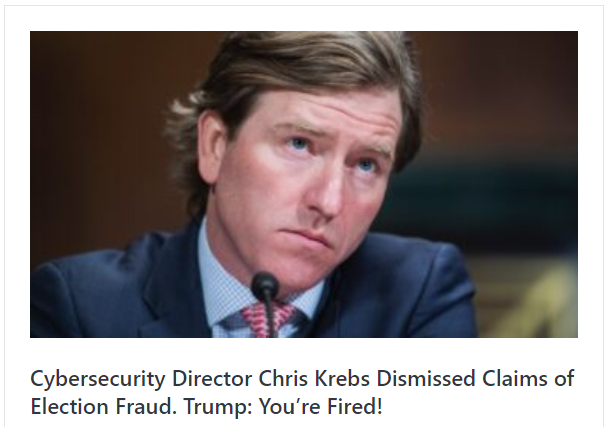 The Non-stop Effort to Take Down Trump and America