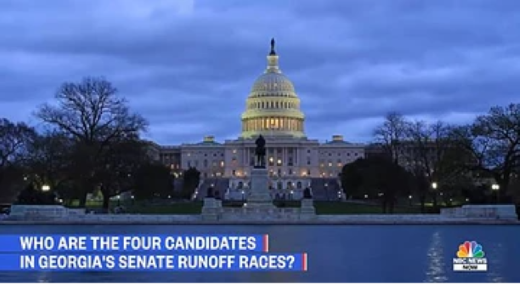 The news that nearly one million absentee, or mail-in, ballots have been requested for the two U.S. Senate runoffs in Georgia should be a wake-up call to Georgia Republicans and MAGA conservatives that it is time to stop fighting about the 2020 election and gear-up to win the January 5, 2021 runoffs.

The very public battle between various factions of the Republican and MAGA coalition means instead of focusing on the Far Left positions and records of “progressive” Democrats Jon Ossoff and Raphael Warnock, the media focus and grassroots energy has been wasted arguing over who screwed-up and allowed Biden to apparently win Georgia’s 2020 presidential election.

And the establishment media is only too happy to fan the flames of dissention on the MAGA side.

Democrats are focused like a laser on winning the Georgia runoffs and are pulling out all the stops to do so – including running the same playbook they used in the presidential election, such as registering dead people and out-of-staters to vote in the runoff.

The Georgia Secretary of State’s office said in a written statement, “We have received specific evidence that these groups have solicited voter registrations from ineligible individuals who have passed away or live out of state. I will investigate these claims thoroughly and take action against anyone attempting to undermine our elections.”

The groups are the Far Left organizations America Votes, Vote Forward, and The New Georgia Project.

Conservative star Representative Doug Collins (GA-9) explained what’s at stake this way, “Down here in Georgia, for people across the country, they need to know that these two Senate seats hold the key to Chuck Schumer not becoming the majority leader in the United States Senate,” Collins said Sunday in a radio interview with WABC 770.

Former Speaker of the House Newt Gingrich, who once represented Georgia in Congress, said, “I don’t think we should in any way underestimate how really important the Georgia Senate race” is adding, “these two Senate seats are the margin between containing Biden and empowering Biden.”

Gingrich went on to say, “The future of the United States depends on the outcome of the Georgia Senate races… If you don’t want a radical left-wing America dominated by left-wing judges with massive tax increases, with a policy, frankly, of appeasing China, and you don’t want that kind of future, you have to go out and vote.”

The Epoch Times reported Gingrich’s remarks came after he was asked to comment on the phenomenon of some Republican voters feeling discouraged about election integrity in the face of mounting evidence in support of claims of voter fraud and other irregularities.

He responded by saying that the answer is not to reject the voting process, but to ramp up engagement and monitoring efforts.

“Frankly, you have to volunteer as a poll watcher and make sure they don’t steal the election,” concluded the former Speaker of the House.

We agree with Newt, the battle to clear-up the fraud in the 2020 presidential election is now in the courts, where the average Republican or MAGA activist can do little to help, but the 2020 Senate runoffs are on RIGHT NOW and the average Republican or MAGA activist can do a lot to make a difference there. We urge CHQ readers and friends in Georgia to take a look at our 30 reasons to vote against Far Left Democrats Ossoff and Warnock below and then get to work winning the Georgia Senate runoffs.

Here’s what Democrats have said they will do if Ossoff and Warnock are elected:

The next, and perhaps final battle to save the America of limited constitutional government is in the Georgia Senate runoffs, it’s time for conservatives to focus all their energies there.

To donate or volunteer for the Senator David Perdue campaign click here.

To donate or volunteer for the Senator Kelly Loeffler campaign click here.

Published with Permission of consevativehq.com