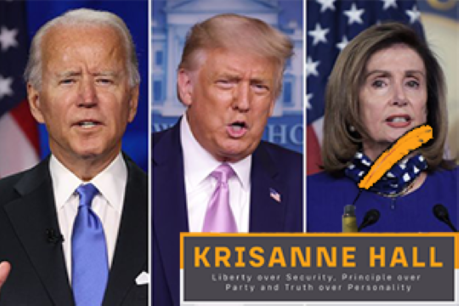 Fake News Alert!  It is a deliberate false narrative that the Speaker of the House would be appointed as acting president if the popular votes are not all counted by Jan. 20, 2021.  This narrative is derived from a false conflating of the Twentieth and Twenty Fifth Amendments.  The fact checkers ought to be telling Americans that by law, there is no way a delay in counting the popular vote can create a delay in electing the president and no way Nancy Pelosi can legally be appointed as “acting” president until a popular vote count dispute is resolved.

The false narrative that invokes the Twenty Fifth Amendment’s “line of succession” ignores the language that indicates that the line of succession applies to vacancies in the presidency from the president’s death, disability, resignation or removal from office; it does not apply to a delay in counting popular votes nor from a normal expiration of a term of office.

The first thing that an honest fact checker would point out is that no president has ever been elected in November as a result of a popular vote count.  As a matter of law, US presidents are elected on January 6 of every year (unless this date is changed prior to January 6 by passing of law), when the Senate President counts the electoral votes not the popular vote (3 U.S.C. §15).  Popular vote is not used to directly elect a President, therefore having an accurate and complete popular vote count is not a factor in delaying the January election.

The next thing your fact checker would have to tell you is that the deadline for counting elector votes is set by law, therefore a delay is not legally permissible.  On the contrary, federal laws were established to avoid a repetition of the extraordinary delay incident to the electoral vote controversy surrounding the 1876 presidential election.[1]

Should there be delays or failures of state electors to submit electoral votes to Congress, there is no need to wonder, create, or invent a procedure, there is established precedent that guides us.  Federal law establishes that if no certificates of votes or lists have been received by the President of the Senate or the Archivist from electors by the fourth Wednesday in December, then the President of the Senate is directed by law to request the State’s Secretary of State to immediately forward the certificates (3 U.S.C. §§12,13).[2]  The States whose electoral votes are missing are sent a collection notice from the Senate President warning that their electoral votes are due immediately. The process, along with specific deadlines for counting electoral votes submitted and disregarding electoral votes not submitted, is well established by historical precedent, federal law, and the Constitution.

Every fact checker should know the date for counting the electoral votes is fixed by law as January 6 following each presidential election unless the date is changed by law (3 U.S.C. §15). The votes that are submitted in compliance with the deadline are counted.  The Votes that are not submitted in compliance with the deadline are not counted.  The Twelfth Amendment requires only a simple majority of electoral votes to elect a Presidential.  Precedent establishes what happens if some electors’ votes are not received in compliance with the deadline and are not counted.  For example, in 1865 only two of the three Nevada electors cast their electoral votes and only two Nevada votes were counted and included in the “whole number of electoral votes” to elect the president.  Similar instances of votes “not given” by electors that were not included in the “whole number” of electors reported, occurred in 1809, 1813, and 1817.[3]

The drafters of our Constitution were concerned that a delay in counting the vote could result in a quiet, non-violent political coup by one party or one or more states, where one or more disgruntled States would hold the entire election hostage.   The framers of the Constitution even warned that the President of the Senate or Speaker of the House should never be given the powers of the presidency because they are elected members of one political party and are therefore partisan. Representatives Morris and Madison warned that in order to pass their party’s political agenda those in power in the Congress could affect a political coup by indefinitely delaying the legitimate election of a president.[6]  The system they established for electing the president is clearly established through the Constitution, Amendments, historical precedent, and Congressional law to prevent any delay and prevent that sort of political coup.

The facts presented in this article are in a Congressional Summary Report which is available to Congress, the President and the Supreme Court. Now you know what your member of Congress should already know and what the talking heads in the media don’t know or are deliberately falsifying to create uncertainty, destroy trust in our elections and foment chaos aimed at the overthrow of our Constitutional government.  These facts cannot be denied.  Know these facts. Demand they be followed. Expect them to be followed.

“if a nation expects to be ignorant & free, in a state of civilisation, it expects what never was & never will be.”  Thomas Jefferson, January 6, 1817.

[5] David A. McKnight (1878). The Electoral System of the United States: A Critical and Historical Exposition of Its Fundamental Principles in the Constitution and the Acts and Proceedings of Congress Enforcing It. Wm. S. Hein Publishing. p. 313.

Published by Permission of KrisAnneHall.com