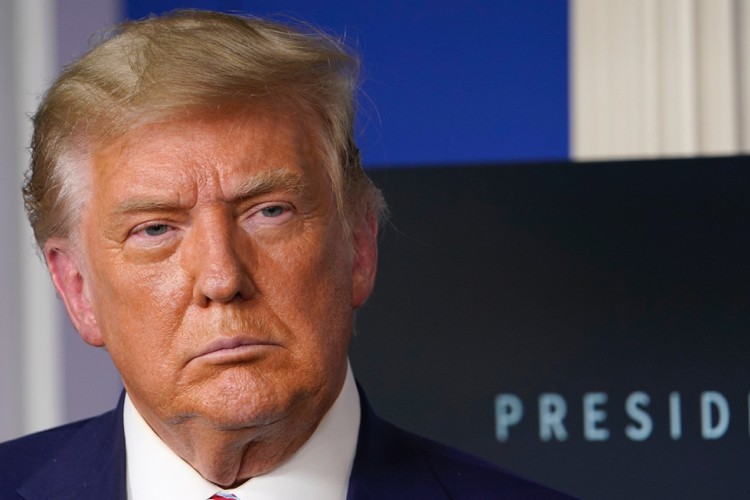 Is the expected legal tidal wave on its way?

On Wednesday, a Pennsylvania court issued an injunction blocking any potential further certification of election results in the state, pending a hearing to be held on Friday.

The order, issued by Judge Patricia McCullough, came in response to a case brought by Pennsylvania voters, including Representative Mike Kelly (R-Pa.), in which it is claimed that a state law allowing for no-excuse absentee voting violated Pennsylvania’s Constitution, which outlines specific cases in which absentee voting is allowed.

“To the extent that there remains any further action to perfect the certification of the results of the 2020 General Election … for the office of President and Vice President of the United States of America, Respondents are preliminarily enjoined from doing so, pending an evidentiary hearing” McCullough wrote.

Pennsylvania Attorney General Josh Shapiro put out an immediate response on Twitter, arguing that because the results of the presidential race have already been certified and electors have been chosen, the judge’s order does not have much of an impact. 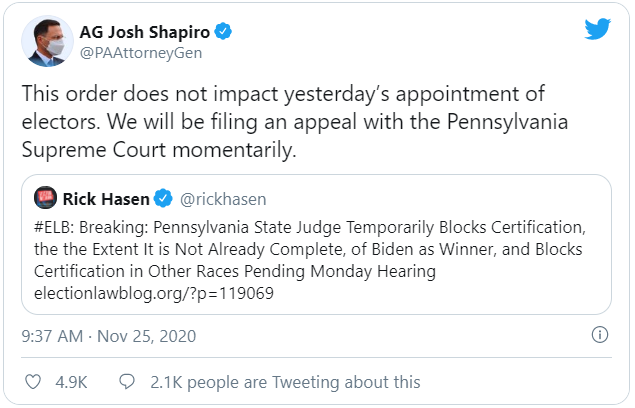 Nevertheless, state officials quickly filed an appeal with the State Supreme Court, asking for a review of whether McCullough erred in granting injunctive relief despite Kelly and the other voters showing a “failure to satisfy any of the prerequisites” that warranted injunctive relief.

With regard to other races in the state, McCullough’s order temporarily bars state officials from certifying any race that has not been certified already. An evidentiary hearing is scheduled for Friday.

The complaint filed by Kelly centers on Act 77, which the plaintiffs called “the most expansive and fundamental change to the Pennsylvania election code to date.” The law expanded mail-in voting, despite the fact that Article VII, Section 14 of the Pennsylvania Constitution, which deals with absentee voting, is very narrow in its scope of who can legally participate.

Under Pennsylvania’s Constitution, the state legislature shall provide a manner of voting for people who will be outside their municipality “because their duties, occupation or business require them to be elsewhere or who, on the occurrence of any election, are unable to attend at their proper polling places because of illness or physical disability or who will not attend a polling place because of the observance of a religious holiday or who cannot vote because of election day duties, in the case of a county employee, may vote, and for the return and canvass of their votes in the election district in which they respectively reside.”

According to the lawsuit, Pennsylvania’s mail-in votes are invalid because a constitutional amendment, not simply a bill, was needed to expand absentee voting.

Also late Wednesday, Sidney Powell, the former member of the Trump legal team handling the election situation, filed two lawsuits, one in Georgia and one in Michigan, claiming voter fraud that swayed the results of the election to Joe Biden’s favor in what allegedly should have been a victory for President Trump.

Powell’s suit focuses heavily on the Dominion voting software, which she says experienced irregularities that affected 96,000 votes (Biden “won” Georgia with a margin of only about 12,000 votes).

One of the most important aspects of Powell’s Georgia lawsuit is her claim that the Dominion voting machines do not keep copies of paper ballots, thereby eliminating a paper trail of the actual votes.

If this is the case, the defendants could find themselves in hot water and give the judge ground to halt any certification of the election, as federal law requires that all records related to the election of a president, vice president and senators be kept for at least 22 months after an election. This is a criminal statute, meaning Georgia election officials who willfully did not keep such records could go to prison.

The fact that the mainstream media is trying to minimize Powell’s lawsuit by making a big deal about the filing’s typos signals that they don’t want the public looking too closely at it or thinking too deeply about its potential implications.

Could this be the “kraken” to which Powell had previously alluded that would blow open the voter fraud case and deliver the president a path to four more years?