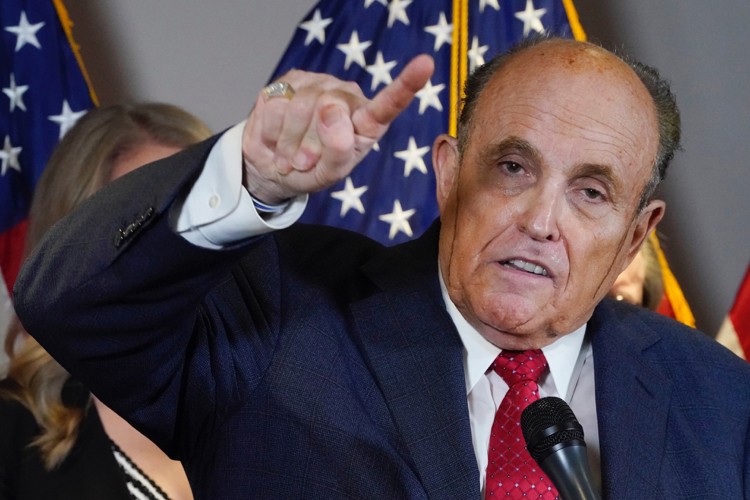 Despite the establishment media’s denial of reality, President Donald Trump’s powerhouse legal team outlined multiple clear and viable paths to a Trump victory in the 2020 election. All of them include exposing and overturning the massive levels of voter fraud, with at least six states currently in play, Trump’s attorneys explained. Even more than the fraudsters, the president’s lawyers torched the establishment-media propagandists who are shamelessly lying to the American people by claiming the election is over and there is no evidence of widespread fraud. In reality, as Trump’s attorneys proved at a press conference in Washington, D.C., on Thursday, both of those claims are absolutely and provably false.

Before the press conference began, President Trump announced on social media that his attorneys would be outlining a “very clear and viable path to victory” in the 2020 election. Throughout the press conference, Trump’s attorneys referenced a map highlighting the states of Wisconsin, Michigan, Pennsylvania, Georgia, Nevada, and Arizona. Overturning the fraudulent results in just a couple or a handful of those states would put Trump back in the White House for four more years. “Pieces are very nicely falling into place,” added the president, who has been censored by the far-left leaders of Big Media and Big Tech social-media firms such as Twitter and Facebook.

Taking the lead at the press conference was former U.S. Attorney and New York City mayor Rudy Giuliani, famous for taking on the mafia and other powerful characters from the criminal underworld. In a press conference from Capitol Hill, flanked by other key members of the Trump team, Giuliani laid out seemingly never-ending evidence of fraud that he said was more than enough to overturn fraudulent results across multiple states. While most analysts have focused on the growing evidence of fraud in states such as Wisconsin, Michigan, Pennsylvania, Georgia, and Arizona, Giuliani also said there may be enough evidence to flip New Mexico and potentially even Virginia.

Giuliani spent much of his time outlining the team’s case. “What I’m describing to you is a massive fraud,” Giuliani said. “They were good. But not that good. They made mistakes. Like all crooks do. And we caught them.” From the New York Times to Jimmy Carter, those on the left and far-left have long warned that mail-in ballots and voting were susceptible to fraud, Giuliani explained. Now, they have officially been proven correct, with evidence of fraud in the mail-in voting process becoming overwhelming and unprecedented in American history.

Pennsylvania was among the worst examples. “The number of voter fraud cases in Philadelphia could fill a library,” Giuliani said, adding that there have been multiple recent convictions there for vote fraud. Among other facts, Giuliani said more than 17,000 provisional ballots were cast in Pittsburgh alone. This, Giuliani suggested, was powerful evidence of fraud — especially because some 15,000 of those provisional ballots were for people who were told they had already voted. The most likely scenario is that the fraudsters sent in large numbers of phony Democrat ballots, and then gave provisional ballots to anyone who showed up in person to cast a vote.

Many witnesses, under penalty of perjury, will testify that Democrat bosses ordered officials to participate in vote fraud, and give provisional ballots to those who arrived and wanted to vote after fraudulent votes had been cast on their behalf, Giuliani continued. Other witnesses will testify about the fact that they were prevented from watching the vote counting, despite a court order and laws requiring that observers be allowed to observe the process. These “irregularities” occurred in multiple key districts and states, according to Trump’s attorneys, suggesting coordination and conspiracy.

One witness cited by Giuliani swears that she was told to alter the dates on absentee ballots, not ask for ID from voters despite laws requiring it, and that she was taught to coach voters on how they should vote. Other witnesses said under oath that they witnessed the same Biden ballots being run through voter machines multiple times by poll workers. Giuliani went through many more such examples across multiple states that he said would be more than enough to overturn the fraud.

Georgia, Michigan, and Wisconsin are all likely to go to Trump once the facts are laid out, too. “The recount being done in Georgia will tell us nothing,” Giuliani said, noting that the envelopes the ballots came in had already been tossed out and therefore could not be considered valid. Just in Michigan, Trump’s team has well over 200 affidavits offering evidence of fraud under penalty of perjury. “If you count the lawful votes, Trump won Wisconsin,” Giuliani said. Lawsuits will probably be filed in Arizona as well. Even New Mexico and potentially Virginia could be flipped based on the evidence now pouring in.

After discussing all of the affidavits and other evidence, and throughout his remarks, Giuliani slammed the establishment media for lying and attempting to deceive the American people. For instance, the claim that there is no evidence of fraud — a claim that has now quietly morphed into no “compelling” evidence of “widespread” fraud — is absolutely false. In fact, affidavits and other evidence laid out by Giuliani and the other lawyers are the very definition of evidence, he said, accusing the media of “lying” repeatedly and flagrantly. However, the whole team seemed confident that the lies and the media propagandists behind them would be exposed.

Former federal prosecutor Sidney Powell, meanwhile, focused on the fraud that took place through the use of Dominion Voting Systems computer programs and hardware. Among other concerns, Powell noted that the scandal-plagued company was using software created in Venezuela at the direction of the late mass-murdering Socialist dictator Hugo Chavez, who was infamous for rigging elections with help from voter machines and the murderous regime in Havana. “The leaders of Dominion are nowhere to be found,” she said. “They are moving their offices overnight. Their office in Toronto was shared with one of the George Soros entities.”

“President Trump won by a landslide,” she said. “We are going to prove it.”

According to Trump Recount Committee member Brian Trascher during a November 18 interview on Newsmax, servers in Germany belonging to Dominion have already been seized and are now being analyzed for evidence. “Now that we have seized the servers for Dominion that were over in Germany, we’re starting to get some raw data off of that,” Trascher said. “I want everybody to listen to me. The things that are going to come out are going to shake the globalists to their very core.” He warned that once it became clear to the Deep State and the Left that Trump would secure another term, terror mobs would be unleashed in American cities to terrorize and destroy.

True to form, the media continued to lie blatantly. For instance, Bloomberg, the propaganda megaphone of globalist billionaire Michael Bloomberg, claimed that Trump’s attorneys “offered no new allegations of fraud and presented no evidence for their claims.” In reality, as anybody who watches the video of the press conference can confirm, Trump’s legal team outlined multiple new allegations and presented enormous amounts of evidence, including reading directly from sworn affidavits filed by witnesses to the fraud. Witness testimony is among the most powerful evidence used in courts of law.

Bloomberg also falsely reported that Giuliani refused to share names of witnesses against the conspiracy. In reality, he named several, including a Democrat, Jessie Jacob of Detroit, who is swearing under oath about the fraud she saw and is simply seeking honest elections. At this point, the media is literally just openly and flagrantly lying — lies that can be easily discredited by anyone with access to the Internet to watch the press conference. In fact, even as fake-media outlets claim officials agree there was no widespread fraud, there was so much fraud that even the head of the Federal Election Commission (FEC) called the 2020 election “illegitimate.”

The New American magazine has been covering the evidence of vote fraud since the election, and will continue to do so. In another recently published article, this magazine outlined how Trump could win by having legislatures in fraud-ridden states send Trump delegates to the Electoral College. Another option would be to ensure that no delegates are certified and seated from the states plagued by fraud. If successful, that would deprive Biden of the 270 Electoral College votes, sending the election to Congress under the 12th Amendment. Under that scenario, where each state’s delegation gets one vote, Trump would likely win, since most states are Republican.

In short, despite the media lies, the election is far from over.