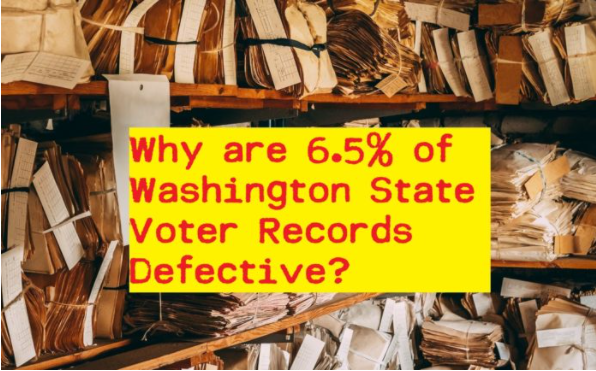 The problems uncovered in the Washington State Voter Records database are troubling, and by themselves don’t prove vote fraud, but they appear to prove the records are not being “cleaned” every 30 days as claimed

Voter Records are stored digitally, and a public record 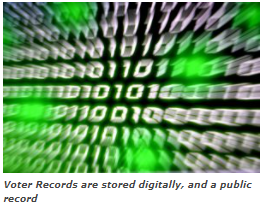 In a recent review of Washington State’s voter Database (from November 5, 2020 – right after the election), it appears, according to the US Post Office, at least 6.5% of the listed voters do not have valid addresses.  Washington State is entirely a vote-by-mail state (since 2011).  When every voter is voting by mail, and there is no practical way for them to receive a ballot, this is a problem.  It is unclear what happened to all of these ballots, but there was no practical way for most of the “voters” to receive these ballots, although many “voted.”

Truth telling is not common in government 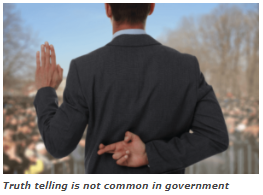 This was a follow up to the article we recently posted about King County’s voter registration problems (see here), which also revealed many uncorrected problems with their voter database records as well.  The recent reports (combined in one file) attached at the end of this article clearly indicate that this problem is widespread throughout Washington State.

This does not mean that 6.5% of Washington’s votes in the unusually high voter participation in this recent 2020 election (83.83% +) were fraudulent.  I feel like I must repeat this statement.  This DOES NOT mean that 6.5% of these votes were fraudulent or that the voters were fake.  Some of them inevitably are, but we have yet to determine the exact number with certainty. That will take some footwork. 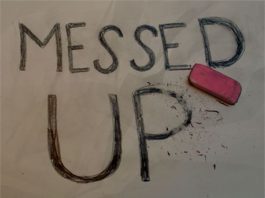 What these reports clearly prove is that there are problems in Washington State’s Voter Registration Database, and the bureaucrats or vendors we pay to maintain these records are not doing their job.  They are not doing their job, despite the repeated, false claim that they in fact do “clean-up” the voter records every 30 days.  These recent reports clearly and unambiguously prove they do not.

You can repeat this test and get the same result

Don’t believe me?  That is awesome! (trust, but verify is the best moto), because this is a repeatable test.  Here is what some intrepid concerned Washington citizens did, and you can do the same thing and come to the same result.  Simply follow these steps: 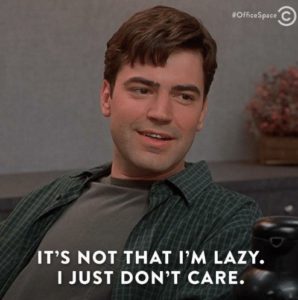 Voter registration databases are neither static nor perfect.  Perfection is impossible, however, there is an acceptable level of address problems in this database.  IF this database was actually “cleaned up” every 30 days as is currently claimed, we would expect to see defective problems with about 1-1.5% of the addresses.  Primarily, this is because people move.  Nothing nefarious about that.  Roughly 10% of the people move every year.  What we find, instead is a volume of problems which indicates not just that the “30 day” myth is false, but that this certification test proves the problems are much higher than they should be.  More concerningly, tends of thousands of the hundreds of thousands of problematic voter addresses have been reported (by the post office) as inaccurate for 4 years or more.  Many of these are addresses that never have existed. This means someone in government, or their vendors (or both) is lying. 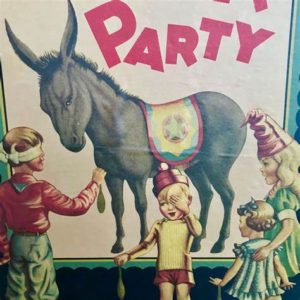 Right now, it is hard to pin this stinky tail on the lying donkey.  However, somewhere between the local county auditors, the vendor (ERIC) to which Washington State pays big bucks to essentially run the same reports, or some employees at the Washington State Secretary of State’s office are not doing their job.  Plus, they are lying to the public and claiming they are.  We really don’t know exactly who is lying and everyone will point fingers at someone else, but at this point – it doesn’t matter.  The lies need to stop and someone needs to the do the job we’ve been told for years was being done. Laws, rules, policies, and procedures are meaningless if they are not followed.

This is a problem.  Here is why it matters

Screwed up voter database records do not by themselves prove fraud.  However, they open the door wide open to those who are willing to commit fraud.  It is sorta like leaving all your cash out in the open on your kitchen counter, exiting the house, and leaving your door wide open.  This doesn’t mean someone robbed you, but it sure makes it easy if someone decides to do so.  There are plenty of bad actors willing to do the stealing.

Just another day at the office

Crufty voter records (particularly in a vote-by-mail system) that bad people can easily identify as voter IDs which can then be safely and anonymously voted when necessary with little chance of exposure are obvious invitations to bad behavior.  Please don’t give me the child-like response of “but nobody would do that.”  Seriously, in our state, just a few blocks away from the Secretary of State’s office, some genius (or corrupt) state employees at the Employment Security Department decided to let almost one billion dollars slip off to Nigeria in a fraud scheme, which they didn’t detect until the Feds told them to shut it down (see here).  We can’t trust anyone or assume anything anymore.  Our bureaucracies are filled with clowns.  Not everyone who works there, but enough to fill a circus tent (or a prison if you don’t like the clown reference). 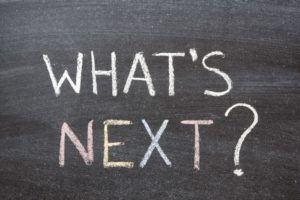 As I indicated in the last article (see here), this is just another part in the series.  The problem exposed here is just the start, and it indicates there are more problems to expose.  This isn’t a deep, dark secret.  It just takes a lot of legwork and some capable people willing to volunteer their time, skills and expertise.  It costs money, but not as much as the state wastes every day on far less useful activities.

Here is the voter fraud that isn’t covered in this article, but which will be uncovered in future articles:

None of these vote frauds would be uncovered by the 6.5% defective voter roll list problem, which is the main focus of this article.  However, it is worth it for those concerned or interested in this subject to realize this rabbit hole is deep, interesting and exposing many more fun tunnels to explore. 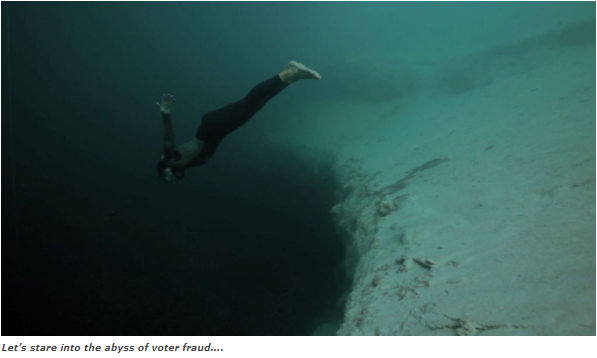 Note: for those who download the reports, I have censored the vendor name used to run the reports not because it is some deep, dark secret, but those who love vote fraud – which oddly enough seems to be my Left-leaning Wokester friends who practice cancel culture – want to harass vendors who are hired to do this mundane work.  This censorship doesn’t change the results of the reports.  If you don’t understand the reports, feel free to share them with people who do.  When in doubt, you can always run these reports yourself and verify the same thing.

Please note: This initial document just contains two DSA Certification reports in the same file (again, this is based on USPS records – not ours, not some other party making them up). Certification reports were all run on November 18, 2020 using the November 5, 2020 complete Washington State Voter Records Database

This report is broken down into two certification reports – one with 3 million records, and the other 2 million plus on the second report ( See report here ) – 6.5% defective when averaged between the two. The global number of defective addresses can be found on the second page of each report (listed as page 1). Feel free to share link far and wide, or download the file for yourself. 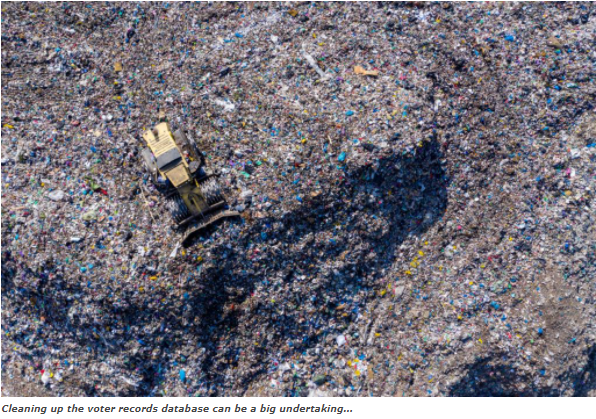