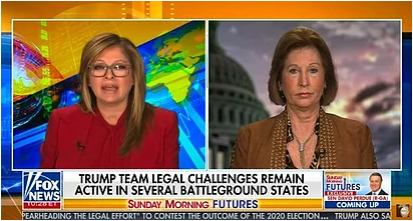 Super lawyer Sidney Powell has been doing a deep dive into the genesis of Dominion Voting Systems voting machines and has released a series of damning tweets and interviews about how the Democrats’ favorite election-stealing mechanism came into being.

“Their system [Dominion] was specifically created and designed by Venezuelan money and interests to rig elections for Hugo Chavez and then for Maduro. It was then exported internationally, I understand, to rig an election in Argentina and it has been used to rig this election to make the votes appear for Mr. Biden, when @realDonaldTrump won overwhelmingly. I’m in the process of collecting evidence … to the point it feels like a TSUNAMI now, of honest, patriotic people [American citizens] who are coming forward to tell us exactly what was going on. I just got word today over 100 Dominion employees have even taken off any affiliation with Dominion off their LinkedIn accounts and Dominion is scrubbing names of people like crazy”

Subsequently in an interview with Maria Bartiromo of Fox Business Ms. Powell said:

“We’re fixin’ to overturn the results of the election in multiple states, and President Trump won by not just hundreds of thousands of votes but by millions of votes that were shifted by this software that was designed expressly for that purpose. We have sworn witness testimony of why the software was designed. It was designed to rig elections. He was fully briefed on it. He saw it happen in other countries. It was exported internationally for profit by the people that are behind Smartmatic and Dominion.

They did this on purpose. It was calculated and they’ve done it before. We have evidence from 2016 in California. We have so much evidence I feel like it’s coming in through a fire hose.”

When Maria Bartiromo questioned those astonishing claims, Ms. Powell did not backtrack:

“First of all, I never say anything I can’t prove. Secondly, the evidence is coming in so fast I can’t even process it all. Millions of Americans have written by now, I would say, definitely hundreds of thousands have stepped forward with their different experiences of voter fraud but this is massive election fraud and I’m very concerned it not only involved Dominion and its Smartmatic software but that the software was essentially used by other election machines also.”

Interestingly enough, as our friend Beth Baumann observed in an article for Townhall, Ms. Powell stated that the software’s user manual even talks about how “votes can be wiped away.”

“It’s like drag and drop whatever you want wherever you want, upload votes,” Ms. Powell explained.

Powell also said the campaign has a sworn affidavit from a person who knows how the system works and was allegedly there when the system was being created and implemented.

Powell went on to claim she has enough evidence, some even dating back to 2016, to launch a widespread criminal investigation. She specifically noted a member of Joe Biden’s team is also on the board of directors for a software company behind the flawed Dominion voting systems.

Ms. Powell said a member of Biden’s transition team, Peter Neffenger, is also a member of the board of directors Smartmatic. “He is president and on the board of directors of Smartmatic, and it just so happens he’s on Mr. Biden’s presidential transition team that’s going to be nonexistent, because we’re fixing to overturn the results of the election in multiple states,” said Powell.

Powell said Neffenger had knowledge that the software provided by Smartmatic was designed to rig elections.

“We have sworn witness testimony of why the software was designed, it was designed to rig elections,” Powell said. “He was fully briefed on it, he saw it happen in other countries, it was exported internationally for profit by the people that are behind Smartmatic and Dominion.”

“They’re facing an election that was absolutely rigged, we are soaking in information through fire hoses of complicated mathematical alterations to the votes,” stated the attorney. “We have identified the system capability that does it…it does in fact exist, regardless of what the name of it is.”

In an interview on America This Week with Eric Bolling, Ms. Powell explained a related software, Smartmatic, was designed for the sole purpose of shifting voting results.

“It was a feature of the system that was designed with a back door, so that people could watch in real time and calculate with an algorithm how many votes they needed to change to make the results they wanted to create,” she explained.

Over the weekend, the President’s personal attorney, Rudy Giuliani, brought attention to the company’s alleged involvement with election fraud while noting the evidence “will all come out.” A comment which Ms. Powell followed-up with this bombshell, “I would warn any state right now that thinks they’re going to certify this election to re-think it VERY SERIOUSLY, because what they’re certifying is their own fraud, and their own complicity in fraud. I might even mount a class action suit later.