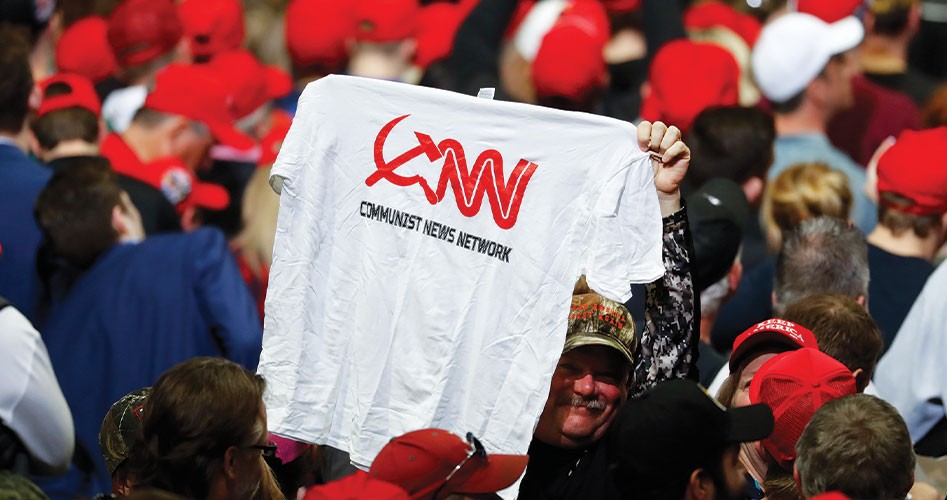 President Donald Trump has literally been at the center of a media hate-fest since before he was inaugurated.

Think what you may and say what you may about President of the United States Donald J. Trump, but there are obvious reasons why his Fake News tweets and comments resonate so strongly with millions of Americans. They can see in the media attacks on him the same animus that the collective establishment media have shown toward them: toward their religious and political beliefs, toward their patriotism, and toward their belief in traditional Judeo-Christian morality.

See if you can think of another individual in American (or world) history who has been subjected to such a relentless, vicious media onslaught of vitriol, scorn, sarcasm, misrepresentation, and fabrications, as well as outright hatred and lies. As President Trump has said of the media attacks in one of his tweets and at rallies: “It Never Ends!”

There is no question that the Fake News media have subjected President Trump to a sustained barrage of unprecedented ferocity and intensity. And it is apparent to any reasonable observer that the “mainstream” media are completely tied in to the Deep State efforts within the federal government — the bureaucracy, the intelligence agency leaders, current and former officials — to bring the Trump presidency down, by whatever means necessary.

We have been witnessing over the past four years something that is far more sinister than mere “bias” by liberal-left journalists. We have been witnessing a coordinated attack not only on President Trump, but on the American Republic itself, by leading media organizations, in alliance with officials still serving in, or recently departed from, the federal government.

On September 5, 2018, the New York Times published an anonymous opinion piece by an individual the Times only identified as “a senior official in the Trump administration,” entitled “I Am Part of the Resistance Inside the Trump Administration.” (The writer was later revealed to be Miles Taylor, a staffer at the Department of Homeland Security.) The subtitle for the op-ed read: “I work for the president but like-minded colleagues and I have vowed to thwart parts of his agenda and his worst inclinations.”

The anonymous “Resistance” writer brazenly confirmed what was blazingly obvious: Many Obama- (and Bush-) era holdovers were doing everything in their capacities to sabotage the duly elected new administration at every turn.

Former U.S. Ambassador to the UN Nikki Haley revealed that Trump’s former Secretary of State Rex Tillerson and former White House Chief of Staff John Kelly tried to recruit her to join them and other insiders in the administration who were “resisting” the president.

Of course, FBI Director James Comey is a prime example of the “Resistance” aimed not only at thwarting the Trump agenda, but also at removing the president.  However, instead of exposing Comey’s dishonest and sanctimonious justifications for his treachery, the media showered him with accolades and enriched him with free promotion for his book tour.

In a highly promoted op-ed for the New York Times on February 2, 2018, FBI Special Agent Josh Campbell wrote: “I am reluctantly turning in my badge and leaving an organization I love.” He was leaving the bureau, he declared, so he could “join the growing chorus” of voices denouncing President Trump. He had already secured a chorus platform at Trump-hating CNN, which hired him as a national security “expert” (no doubt, for at least 30 pieces of silver more than he made at the FBI).

These cable and network “regulars,” in addition to steadily pumping out anti-Trump invective, are undoubtedly using their connections to co-conspirators in the Resistance to strategically (and illegally) leak information and documents, much of it classified or, in the case of Trump’s tax returns, protected under privacy laws.

Thus we have seen an avalanche of illegal leaks from Deep State operatives inside the federal government to their Deep State confederates in the controlled Big Media, aimed at thwarting and undermining the president from day one. These are felony offenses. However, the media cabal not only has used and excused these criminal leaks, but has also celebrated and lavishly promoted them, along with numerous “leaks” of alleged quotes by Trump and administration officials that have either remained unverified or have proven to be fabrications or completely taken out of context.

Consider, for example, president Trump’s stolen tax returns, which the New York Times calculatingly turned into a preelection hit piece that would dominate several news cycles with anti-Trump propaganda. The Times is guilty of a felony offense for publishing them, as is the person (or persons) who stole them. But this is standard operating procedure for the Times and other Deep State spigots of disinformation. Obviously, the Times is banking that the Resistance within the FBI and DOJ will do all they can to make sure no Timesman goes to jail for this criminality. Ditto for the Washington Post, CNN, NBC, and other regular leak venues favored by the Deep State.

Whether it’s from anonymous sources or Resistance partisans posing as whistleblowers, the Fake News bund can be depended on to run with anything (whether true or not) that will damage President Trump, regardless of whether it also damages America’s national security, prestige, economic wellbeing, or social harmony. Thus they have no problem defaming and crucifying an innocent and heroic man such as General Michael Flynn, or in providing cover to the Obama administration officials (including President Obama himself) who illegally unmasked Flynn’s name in classified communications and illegally spied on President-elect Trump and members of his staff — all the while sanctimoniously proclaiming their reverence for the “rule of law.”

Let’s not forget the phony Steele Dossier, the completely fabricated Trump-Russia conspiracy theory, the fake Trump-Ukraine conspiracy theory, the bogus obstruction conspiracy theory, the false Trump racism charges, the Trump impeachment, and the sham charges that Trump failed to act in a timely manner on the COVID “pandemic.” All of these political spectacles — and much more — have been completely media-driven attacks on the presidency, the rule of law, and the American people. They have intentionally, repeatedly crippled the American government at one of the most critical moments of our nation’s history and aimed to topple the Trump presidency.  It would have been impossible for Deep State operatives in the government and their comrades in the Democratic Party to have gained traction on any of these sham issues without the orchestrated, unceasing campaigns of their media cohorts.

The succession of fraudulent “scandals” and stage-managed leaks has unmasked many of the Deep State perpetrators. But who is orchestrating all of these actions by the various players? The “brain trust” and the public face of the Deep State, operating both in the open and behind the scenes, is the globalist-minded Council on Foreign Relations (CFR). For a century now, since the 1920s, the CFR has been tenaciously, incrementally extending and consolidating its influence and control over American institutions: political, educational, financial, cultural, and moral. A key element of its early agenda was to gain dominance over the American news media and means of communications. In this they have been spectacularly successful, with but a handful of CFR-dominated corporations controlling virtually our entire media landscape. And with that control they have steadily pushed America toward a more controlled society, toward what they call a “new world order.” This “new world order” they envision will (if they are successful) culminate in a world government that takes Communist China as its model. This is not “conspiracy theory” but conspiracy reality.

These are the folks who are scripting and choreographing the hysterical Trump Derangement Syndrome that we witness in daily “news” reports. These are the elite globalists who describe as “mostly peaceful protests” the violent anti-Trump, anti-American BLM/Antifa riots and arson, while simultaneously denouncing peaceful anti-lockdown/anti-mask mandate demonstrations as “irresponsible,” “extremist,” and “dangerous.”

These are the would-be rulers of the “new world order” who proclaim a commitment to the First Amendment while simultaneously demonetizing, deplatforming, and outright censoring all speech deemed politically incorrect. These are the people who, in true Orwellian fashion, have virtually smothered any “mainstream” media mention of the latest revelations of Joe and Hunter Biden’s payoffs from Ukrainian energy giant Burisma and payoff negotiations with the Communist Party-controlled China Energy Co. Ltd. They smothered not only news of these explosive disclosures, but also evidence of Joe Biden’s lies that he knew nothing about these dealings of his son, Hunter Biden.